Christians, the church and Memorial Day 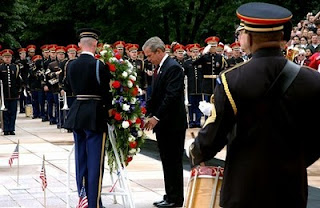 This Monday is Memorial Day in the United States, so most of us not only get a day off, we also commemorate the men and women who have died in the service of the United States military. There are few Americans who have not been touched in some way by this day. My wife’s grandfather on her dad’s side was killed in action during World War II at Anzio Beach. If you go back far enough, most American families have lost someone to war and Monday is the day we remember our fallen war dead.

Across this country on Sunday, many churches will mark Memorial Day. It is not unusual to recognize war veterans among congregations. Many church buildings sport American flags on the podium next to the pulpit. I am certain that many prayers will be offered in thanksgiving for those who died to protect our right to freely assemble for religious services.

Blessed are the peacemakers

Jesus taught that “Blessed are the peacemakers”. That seems hard to reconcile with a celebration of war making, even if we are on the “right” side. I have written before on my stance that the Bible doesn’t leave room for Christians wielding the sword and based on that it seems inconsistent to gather with the church and simultaneously celebrate or commemorate those who killed and were killed in wars.

One of the most tragic witnesses the world has observed over the centuries is the grotesque spectacle of Christians who kill, especially when we kill each other. It is quite reasonable to say that in most wars where American soldiers were involved there were Christians killing other Christians. Even in Nazi Germany there certainly were soldiers who were Christians. It is hard to say you love your brother but are willing to shoot him because your nation tells you to. God’s people are united not by nationality but by our common salvation. God isn’t in the business of picking sides between secular nation-states in wars.

I am less and less convinced that America is or has been a healthy place for the church. It is commonplace to think of America as the land of great freedom (which it is) and especially for religious freedom (absolutely!). Having affirmed that, I am coming to the conclusion that the very religious freedoms that we cherish and hold dear enough to kill others to retain have been unhealthy for the Gospel witness and for the life of the church. Easy-believism flourishes in America but so does easy-churchism. The great paradox of the church is that where persecution is greatest, the church is often its healthiest. The converse seems true, where the church is most accepted, the witness of the church is the weakest. The persecuted Anabaptists being driven from their homes were probably a healthier manifestation of the church than Calvin’s Geneva. The underground house church in China likewise looks more like what we see in Scripture than the five thousand person megachurch in America. We have come to equate Western religious tradition with the church but that simply does not jive with Scripture. That doesn't mean I don't appreciate living in America. God has placed us here and we will live here in America as long as God wills it but I am not more blessed by God than my brothers in Ethiopia or Brazil because I live here in the United States. That leads me to my final point...

True Freedom is not based on where you live

For Christians, our freedom that we cherish is not found in our Constitutional right to freedom of religious expression or of free speech or the right to keep and bear arms. Our freedom is in Christ because He has freed us from the only bondage that matters. An unbeliever in America has the freedom to sin as he or she chooses but is not truly free. A believer languishing in prison in China is far freer than any unbelieving American, even while imprisoned and possibly tortured, because of what Christ has done. Freedom for an American Christian was not won on a battlefield at Yorktown and was not preserved at Midway. It was bought and paid for on a cross.

I know this is not going to be a popular viewpoint. I love military history. My favorite movie of all time is Patton. We as a family have taught our kids to respect those who serve in the armed forces of the United States for their sacrifice (which is very real) and their heroism (also true). We have taught our kids to love this country as unique in the world and that American exceptionalism is a fact of life. Those are the safe and easy positions, the default for Americans. I am having a much harder time seeing those as compatible with what we should be instilling in our kids. The bottom line, as always, is that we should have more affinity with a fellow believer in China or Tanzania than we do with an unbeliever in America. Just because the government of America says “Our cause is just, now go kill that person” doesn’t mean Christians should dutifully pick up the sword.

I am not saying we cannot commemorate the fallen soldiers of the United States. I just don’t think that we should do so in context of the gathered church.

Email ThisBlogThis!Share to TwitterShare to FacebookShare to Pinterest
Labels: memorial day, the sword

My grandfather fought in WWII, at age 17, and saw/did things he still can't speak of to this day (at age 88), but cries when he thinks about.

Also, my husband was in the Army for 5 years and now works with soldiers as a civilan.

I appreciate the sacrifices of those before me, but I don't necessarily feel that I'm more blessed because of said sacrifices.

WOW! Kudos, brother. Likely an unpopular viewpoint, but i believe so true. The believers I fellowship with have had this discussion on multiple occasions, regarding which nation our true allegiance should lie with? We have concluded what you mention, that we are a people for God's own possession, a holy nation, and our allegiance should be to each other and to His Kingdom. I too am glad to live in America, but my self-identification is much stronger as a follower of Christ than as anything else, and my kinsmen, as you said, are fellow Christians and not necessarily other people who happen to live in the same country. It seems to me that there has been a great "separation" of the body, that we all function in such distinct little camps. There is the very beginnings of some intra-regional connecting of the body where I live, and I'd love to see us become knit with believers in other nations as well.