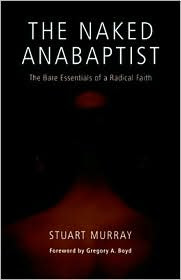 Stuart Murray's The Naked Anabaptist is a unique book. There are lots of books on Anabaptism but almost all of them are historical in nature. They described who Anabaptists were. Murray describes who (some) Anabaptists are. A subtle but important distinction.

I appreciate that Stuart Murray is willing to take on and address the flaws in Anabaptism, especially some of the problems he perceives in historical Anabaptism and its most common manifestations today among the "Big Three", i.e. the Amish, the Hutterites and the Mennonites. I don't agree with all of his criticisms (for example his disdain for the patriarchal aspects of historical Anabaptism which he considers a cultural anachronisms but that I see as Scripturally faithful) but he is willing to call it like he sees it and there are many problems that have become entrenched in Anabaptism over the last four hundred years.

I am concerned that in some sections it smacks of a vague political liberalism that is co-opting Anabaptism. Self-sacrificially sharing material resources and refusing to defend one’s self are not the same thing as 20th/21st century liberal activism and from my readings on the Anabaptists, “social justice” was not even on the radar. The Anabaptists were not hippies holding peace rallies amidst the opulence of the West, they were a hunted and persecuted people who nevertheless refused to take up arms to defend themselves or to defend a nation-state. Statements like this: "Peace is at the heart of the Gospel because the mission of God is to bring peace to the whole of creation" (pg. 129) are common in The Naked Anabaptist and are theologically sloppy at best. I think Stuart Murray understands that the Gospel is more than liberalism couched in religious terminology but I can also see how some people would read statements like that and draw the wrong conclusion. I was also troubled by his admiration for the Emergent church movement, especially those among that group who champion what looks dangerously like "another gospel".

In spite of some areas of concern, The Naked Anabaptist is a book I recommend. Read it with your eyes wide open but if you are interested in something other than the church as usual, you should definitely read it. It can be easy to see Anabaptism as something from hundreds of years ago that only lives on in history books and modern day anachronisms like the Amish. The reality is that Anabaptism still influences the church today, in subtle ways and more recently in more overt ways. The great challenge is not to mirror or adopt all of 16th century Anabaptism but to learn from the Anabaptists in a way that is faithful to Scripture. After all, that should be the goal of every Christian from every tradition.