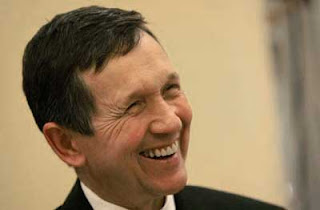 Democratic presidential candidate Dennis Kucinich questioned President Bush's mental health in light of comments he made about a nuclear Iran precipitating World War III.
"I seriously believe we have to start asking questions about his mental health," Kucinich, an Ohio congressman, said in an interview with The Philadelphia Inquirer's editorial board on Tuesday. "There's something wrong. He does not seem to understand his words have real impact."
I wonder if Dennis Kucinich realizes how utterly ridiculous for him, of all people, to question the sanity of anyone else. I mean, have you seen his haircut? Dennis has to be one of the kookiest politicans of all time, he of the Department of Peace fame. I am sure that a DoP would have prevented September 11th, World War II, the killing fields of Cambodia, etc. Just think good thoughts!
Posted by Arthur Sido at 9:41 PM No comments: 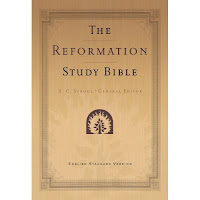 Reformation Study Bible for only $15.17!

I love my Reformation Study Bible and it has come to my attention that Ligonier is selling it for only $15.17 in celebration of Reformation Day. You can only get this price on Wednesday, October 31st but it is a great deal and a wonderful resource. Makes a great gift! You can order online from Ligonier here.

The Philadelphia Conference on Reformed Theology or Together for the Gospel?

In what is yet another horrible scheduling blunder, two of the better Reformed theology conferences are scheduled for the same week, in the middle of April 2008. That leaves me with a choice, go to Grand Rapids which is cheaper and way more convenient, or go to Louisville which is going to cost a whole lot more. We have free lodging in Grand Rapids, but frankly I will admit that I am a bit of a speaker snob, and the thought of Mohler, Dever, Sproul, Piper, MacArthur, Duncan, Mahaney etc in the same conference (T4G) is intoxicating (in a good Baptist way of course). I am leaning pretty strongly toward Louisville, if for no other reason than it only happens every other year and Grand Rapids is every year. Of course, I am well known as the king of rationalizing...

(With any luck, the Toledo Reformed Theological Conference will be scheduled a completely different time, or Steve Camp and company will be all alone!)

UPDATE:
Looks like I have an additional travel partner for Together for the Gospel, so it sounds like Louisville is the winner! Now I have to register so I save $50!
Posted by Arthur Sido at 8:47 AM No comments:

Our first family picture of all ten of us....

Only one kid is crying, which is something of a record for us!
Posted by Arthur Sido at 10:50 PM No comments: 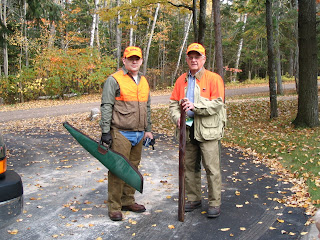 Why do they call it "hunting" instead of "shooting"?
Because sometimes going hunting is just walking in the woods while lugging a gun, and today was one of those days. Not a grouse or woodcock to be seen...
On the bright side, I saved some money by not using any shotgun shells...
Posted by Arthur Sido at 10:47 PM No comments: 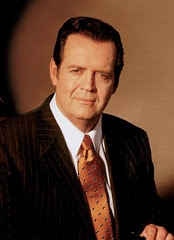 The danger of political pragmatism in light of the Gospel

In what is becoming a recurring theme, we see further blurring of the Gospel to meet a political objective. Richard Land, of the Southern Baptist Ethics & Religious Liberty Commission, is reported as having described mormonism as one of the Abrahamic faiths...
...Land, expanding on remarks he made last week at a gathering of political conservatives, told Al Hunt on his Bloomberg TV show Political Capital that he considers the Church of Jesus Christ of Latter-day Saints, as the Mormons know themselves, as "being the fourth Abrahamic Religion," in addition to Judaism, Christianity and Islam, all of which trace roots of race or belief back to the patriarch Abraham.
What makes Islam, Judaism and Christianity unique, the Abrahamic religions, is the recognition by each of a single, monotheistic deity. Mormonism holds to more of a pagan view, of multiple gods. That is ultimately where he difference comes in and why it makes no sense to describe mormonism as "the fourth Abrahamic religion" The god(s) of mormonism would be unrecognizable by Abraham as the God he covenanted with. God's covenant with Abraham was the one true God condescending to deal with His creatures in a gracious way, and all throughout both the Old and New Testaments we see God jealously asserting His uniqueness above all other false gods.

Land went on in the Ethics Daily.com article to reject the notion of mormonism as a cult:

Land said evangelicals who are "less charitable," call Mormonism a cult, but he disagrees.

"A cult is a form of faith which does not comply with the essential teachings of the Christian faith but claims to be within the Christian faith or to be the true expression of the Christian faith, as opposed to being another religion like Judaism," Land said.
No doubt Dr. Land is a bright, well-educated man but he apparently has not spent enough time looking into mormonism vis a vis their cult status. Again we see a problem, a contradiction. Mormonism perfectly fits into the Land's own definition of a cult: the do not comply with essentials of the faith (monotheism, the Trinity, justification by faith alone, etc.) and they claim to not only be within the Christian faith, but the only true expression.
There are always disagreements in areas of faith. There are Baptist brothers who are Reformed but hold to a dispensational view that I disagree with. My Presbyterian brethren hold most of the same doctrines I do, but we part on areas of ecclesiology and baptism. Other Protestants hold to view that I insist are inaccurate. Roman Catholics are in error on on a number of issues, including transubstantiation, justification, the papacy, etc. but they do hold to an Orthodox view of the Trinity. Mormons stand completely outside of all of that and are in no way a Christian faith, despite their blasphemous use of our Lord's name.
As I have posted before, there is a danger in being so concerned about politics that we ignore doctrine. Mitt Romney may be a great guy, in fact he might be a good candidate and even a good President. But none of that changes the fact that he is a member of a faith that is not Christianity, not "the fourth Abrahamic faith", not anything other than a false Gospel that condemns rather than saves. I don't want to see Hillary Clinton in the White House any more than Dr. Land does, but I refuse to use the truth of the Gospel and the identity of God as a political bargaining chip
Posted by Arthur Sido at 9:52 AM No comments: 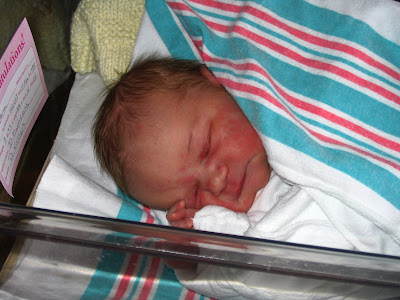 Victoria as of this morning...

Email ThisBlogThis!Share to TwitterShare to FacebookShare to Pinterest
New Baby!

Baby number eight is as precious as the rest, what a blessing she is to our family!

Here are some videos...

These quizzes rarely expose anything new, but are fun nonetheless and make you think a bit about some of the questions...

Posted by Arthur Sido at 8:26 AM No comments: