Who are we raising our children to be like?

I had a very fruitful and enjoyable meeting with a number of other men last night. Our discussion which ran from 5 PM to after 9 PM centered on the linkage between the family and the church in light of God’s will. Lots of varying opinions although in many ways we were all on the same page. The conversation rekindled something I have been noodling over for a week or so.

Often it seems that we see our calling as Christian parents is to raise our kids for life in the church. In other words, we raise them to be good church members. Go to college, get a degree, get a “good” job, have fun and travel, once you have that out of your system get married, have a few kids, come to church on Sunday and bring your kids along. Make sure they are in Sunday school and attend Vacation Bible School. Send them to a “good” school so they get a good education and can get into a good college so they can get a good job and be able to afford to buy a nice home and take nice vacations. Oh and take their own children to church. Repeat for generation after generation.

I think we need to change our thinking. Raising our kids by the world’s methods and with the world’s mentality with an added sprinkle of religiosity is not going to give our kids the tools and mindset that they need to be ministers in a post-Christendom nation and in a world where American-style Christianity will soon be a distinct minority. The world says we should desire for our kids to be successful. I think the Bible shows us that we should desire for our children to embrace servanthood.

There is a huge difference between raising kids for success and raising kids for servanthood. The two may not be in all cases mutually exclusive but it is true that the drive for success often makes it harder to seek to be a servant. Success requires that you lift yourself up over others by achievement, acclaim, status, income. Servanthood requires you to lower yourself, to seek to place yourself under others. 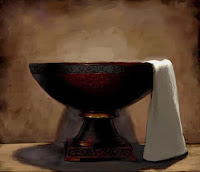 It is a living witness of the Christ who girded Himself with a towel and was unashamed to kneel before others to wash their feet. Jesus was not a successful businessman or an acclaimed athlete or a wealthy man. He was known for a simple life with nowhere to lay His head, a man who mingled with and ministered to the weak and helpless and diseased in the shadow of the seats of power. It seems hard to reconcile raising our kids to emulate Him while telling them they should seek to embody the world’s definition of success.

The kicker is that just telling our kids about seeking to lower themselves in servanthood rather than exalting themselves in success is that just telling them really isn’t getting it done. We need to demonstrate it. This is a key missing ingredient in so much of the church. We talk the talk but rarely walk the walk and just to keep it real, kids today see right through that. I have been a pretty poor example of this most of my life but I am trying to change that. My wife has been a much better example to our kids, especially our girls, of setting aside self to raise and disciple our children.

We all have a long way to go but it must start with a reorganization of our priorities and expectations for our kids. That starts with looking into the Scripture to see a Savior who was a servant rather than at a TV to see who The Donald is going to fire tonight.
Posted by Arthur Sido at 2:49 PM

Having raised five children, the baby is now 45, and a bank manager, I agree absolutely with what you have written.

During my years as a pastor, I came across parents who claimed to be Christians, who told me that they literally took their hands off the development of their children, because they have, and I quote, "committed them to the Lord".
They said, "it is in the Lord's hands how the children grow up".

I know that at least one of those children is now enjoying life imprisonment.

That borders on spiritual child abuse but I am afraid it is quite common in the church.

huge shift that will draw objection/scorn from a world obsessed with success & dominance.

Thank you for this post as it is such an encouragement. I am a homeschooling mom of two young teen sons. I pray more Christian parents would see the folly of raising their children to be succussful in the the worlds eyes. That success will not save these dear ones when they stand before our Lord. I pray my husband and I will be an example of service to our sons and that they learn to love the humble work our Lord has for them.

This is a great topic and desperately in need of being told.
I read Voddie Baucham's book "Family Driven Faith" a few years back and by the Lord's work came to realize how neglectful I was in this area.
Parents just don't realize that they will have to give an account to God for the raising and discipline of covenant children (Det. 6:7-9).