Is America the World Headquarters for Christianity? 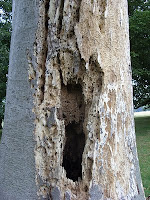 The common image of mission from an American perspective is of the land of the free, home of the brave as THE world headquarters for Christianity, a rock solid land (a Christian nation after all!) sending missionaries to “others” to convert them to a decidedly American vision of Christianity.

Maybe that image is not quite correct. Granted we do send lots of missionaries out. That may not tell the whole story though. America is less a fortress of Christianity sending forth waves of missionaries to convert the heathen than it is a tree with a rotten center that drops a few seed pods here and there, looking on the outside like a relatively healthy tree while death and decay claims it from within. We only need to look at the evidence to see that our misty eyed nostalgia about the church in America is false.

Let’s look at the largest and arguably the most conservative major denomination in America, the Southern Baptist Convention. The SBC just wrapped up its annual meeting and there was no lack of talk and speeches and sermons talking about evangelism and missions, just like every year. Why then do we see results that are so poor year after year? According the statistics released at the convention there are 16,136,044 “members” in SBC churches. In other words, just over 5% of all Americans are Southern Baptists. Everyone knows that number is bogus but we keep repeating it anyway, just like mormonism claims more than 10 million members, many of whom have walked away completely or at least never attend or the huge numbers of Roman Catholics who haven’t been to Mass since they were kids.

Anyway, using the SBC’s self-reported number, there are more than 16 million Southern Baptists. The International Mission Board is, unless I am mistaken, by far the largest denominational missionary sending agency. According to reports, the IMB has about 5000 missionaries, down substantially from years past. That is one missionary for every 3,200 Southern Baptists. Read that again. A denomination that was created largely to facilitate cooperation among Baptists, boasting some 16 million members in the most affluent nation in the world supports one missionary for every 3200 members.

It is not just an overseas problem and it is also not like the 3200 members per missionary are out doing the work of evangelism back home. Reports from the convention also indicated that the number of baptisms in 2010 dropped to 332,321. In other words, there was one baptism for every 48 Southern Baptists. What those numbers don’t reveal is how many of those baptisms were the children of church members, people who are being “re-baptized” because they had been “baptized” as infants or how many of them were adults. How many of those baptisms are kids under the age of ten who "made a decision" during childrens church or VBS and never mature into faithful adulthood because they were never reborn in the first place. Makes me wonder. If you are Baptists who don’t baptize anyone, are you really Baptists? Ed Stetzer is quoted in USA Today as saying:

"Baptists love to talk about evangelism as long as someone else is doing it," Stetzer said.

That is blunt but true. Here is the ugly truth, a truth that is not going to be changed by passing resolutions or “restructuring” the convention or commissioning more surveys or even by raising more money via missions offerings. The problem is a systemic one and one that impacts almost every corner of the church in America: we have a subcontracting mentality that sees evangelism, mercy, justice, missions, in other words the Great Commission and the Great Commandment, as something that “regular” Christians are not competent to carry out or really expected to be involved in. Sure pastors talk about evangelism but the way we understand and structure the church is antithetical to true every member ministry. When we subcontract out ministry to a select professional few we are going to get results like the ones we see.

This is not to bash Southern Baptists. I came to Christ in a SBC church and we still have a lot of affinity for the SBC. They are the biggest denomination and the most visible, so what we see in the SBC is likely what is going on in the other denominations on a smaller scale. The issue is on a much grander scale. Structurally the church in America is not organized to truly carry out mission work because the primary focus of the church in America is perpetuating the institutions. If local churches are faced with a choice between cutting back on missions or selling their building to save money, they will cut back on missions 999 times out of 1000. Even the most “evangelistic” of local churches is far more focused on the Sunday morning meeting than they are on the Great Commission. You need to look no further than this post from March of this year, Speaking of haranguing the institutional church , where we see the SBC sitting on over $40 billion in property while cutting back on missions. That tells you everything you need to know about our priorities. How can this be in the most “Christian” nation in the world?

We seemingly have every "advantage" in America. Christian radio stations across the dial, Christian books stores, Christian colleges, Christian churches on every corner. Based on how churchy we are, we should be having a major impact on world missions.

Are these really advantages? Is our understanding accurate? In many way I think that the very factors that we see as blessings and advantages are actually disadvantages and perhaps even curses. Our affluence, our “freedom”, our prevailing church culture are great for making religious people. Equipping disciples to make disciples? Not so much.

At the risk of causing trouble, we have a serious problem in the church. It is not heretics, although we grow heresy in the American church like Iowa farmers grow corn. It is not an insufficient quantity or even quality of preaching, there is enough sermonizing going on to fill a thousand lifetimes and if you don’t like the “preaching” of any of the local clergy, you can download and listen/watch the very best sermonizers in the world on demand. It is not that the sheep don’t give enough money when the plate comes around because like the Federal government our problem is a spending problem, not a revenue problem. No, the problem is two fold: we have a tragic and unbiblical misunderstanding of the church and within our misunderstood expression of the church we have tons of religious people who are not born-again. Until we restore a Biblical view of the church and change our mission from self-preservation to disciple making, we will continue to see millions of church goers donating billions of dollars in offerings that leads to minimal impact in disciple making.

We don’t need more money. We don’t need more professional missionaries. We don’t need to plant more churches. We need every Christian, EVERY CHRISTIAN, to be about the work of making disciples. If we can get closer to that mindset, the church plants and the money will take care of itself. Until we do, all of our churches, radio stations, Sunday school classes, endless sermonizing, denominational bureaucracies, Bible colleges, seminaries, devotional calendars, etc. will be meaningless. We will just be a hypocritical and self-righteous religious people doing the same thing over and over and wondering why we don’t get different results.
Posted by Arthur Sido at 11:05 AM

It seems that USA led the way with the
mindset you speak of. Australia was quick to import it!