(My) New Perspective on Paul 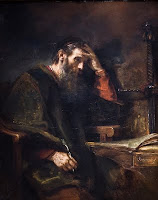 Paul is one of the defining figures in the church, second only to Christ Himself in the New Testament. How you view Paul and what he taught and how he lived will impact in every respect how you view all sorts of issues: the church, ministry, justification, gender, missions, on and on.

My view of Paul has taken something of a radical change from how I viewed him a few years ago. Back them I saw Paul as this powerful pastor-theologian figure, smiting unbelievers and false teachers alike with reckless abandon and fiery polemics. He was the epitome of a theologian and apoplogist, a man who formed a picture of church leadership and ministry that those men called to the ministry should emulate. In many ways I saw Paul as someone who had a lot more to say to pastors than he did to the laity.

Today I see Paul as a man who recognized and embraced his own weakness, his own inadequacy. In everything that Paul wrote I see a man who has come face to face with his own insufficiency and that reality has impacted how he views just about everything. I don't see Paul as a leader and a theologian who had to work, but as someone who was a simple servant of Christ and who labored at work and in ministry. In fact it was his work and his service that formed who Paul was and he didn't see the two as separate but rather saw working and laboring for and among the people of God as his ministry. He knew people in the church intimately and loved them. He labored and ministered alongside them (Phil 4:3), not over them. He saw himself the chiefest of sinners, not the greatest of saints. He strikes me as a man continually surprised to be used of God in the way he was.

That doesn't mean Paul wasn't a theologian or a leader. He certainly was! Just not in the way we traditionally understand him. Paul is not a man I would expect to find in his study, poring over the Scriptures and penning lengthy treatises or in church gatherings delivering a soaring oration but rather a man with dirty hands who wrote when he had time (often when he was in prison!) to those he knew and loved to encourage them. Paul was in every way a remarkable man because of how God used him, not because of what he accomplished or wrote. Paul is a great encouragement to me not because of how powerfully he wrote but because of how mightily God used a flawed, weak sinner to accomplish His glorious purposes. If God can use Paul in spite of his flaws and weaknesses, then God can use me as well.

Paul the scholar, Paul the pastor-theologian appeals to me but it was Paul the weak and inadequate servant and laborer that God used.
Posted by Arthur Sido at 10:50 AM