Marrying a farmers daughter does not make you a farmer

My wife is a farm girl, through and through. Gotta a piece of farm equipment? She can drive it. Got some sort of critter? She can butcher it. Have some work to be done? She can work most men into the ground.

Me? Not so much. I grew up in the home of a doctor. I read dozens of books in summer and rarely went outside if I could avoid it. I did "raise" pigs for the fair as a teen but that meant I bought them and a friend kept them at his place until they were delivered for the fair where I would show them.

Anyway long story short, we met (at the county fair no less!), fell in love and got married, a marriage that is going on twenty years next February and has resulted in eight kids, lots of laughing and lots of crying and growing closer over the years that I never would have imagined as a teenager hanging out with my girlfriend. For years we dreamed of having a little farm and we finally have one, just four acres but just about right.

So I am married to a farmers daughter, have helped out on my in-laws farm a time or two and have a little farm. Ergo, I am a farmer. Right? Well, you tell me...

So I woke up a little later than normal this morning, being Saturday and all. I had great intentions for getting some done 'round the farm. The sheep fence needed fixing after part of it got torn up by our stallion, so that was my first task. I showered of course because it is important to be well groomed before doing any farm work, as everyone knows. I strapped on my boots and headed on out to do some manly stuffz.

Uh oh, the new mare was loose and hanging around the stallion. You would think a mare of her age (over 20 years old) would show some diginity and decorum but she is not exactly a model of restraint, chasing after that three year old stallion 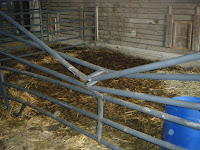 . I wondered how she got out and so after I caught her I went to the other barn to find out. The picture in this case is indeed worth a thousand words. Looks like she tried to jump out, made it halfway and squished the gate. Those tubes are made of steel by the way. She really likes that young fella.

Well, we were in a pickle. The horse barn had the stallion in it, so we couldn't put her there. When we tied her up outside, she just got wound up and kept trying to get over to the stud. So I had a great idea (and it actually was a good idea). We would put her out in the far pasture and shut her in. There would be another pasture between her and the stallion and they would be far enough apart to not go crazy. Plus the electric fence discourages even the most...eager of horses.

Here is the problem. To get her from here to there, I had to lead her down the narrow path from the horse barns to the pastures. It would likely be muddy. Had to be done though so I figured, why not? Sure we have had torrential rain the last few days but how muddy could it be? 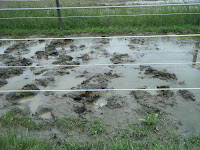 Oh. It was THAT muddy. That was OK though. I had my knee high rubber boots on and a tight grip on the mare's lead. All I had to do was walk her through the mud and once we got to the pasture, it would be smooth sailing. That plan seemed quite solid until I actually got into the mud. About halfway down the path, I noticed that I was a) sinking into the mud deeper and deeper with each step and b) the mud was causing a suction that made it harder to lift my feet. When the mare started refusing to keep walking, I suddenly realized I had a problem. I had stopped and a serious suction had formed around both feet. I had a tight hold on the lead but at the other end was a pretty strong mare who had an equally strong desire to go the other way. In the middle of the mud, with one hand on the lead and nothing to brace myself against, I was sinking deeper and deeper into the Indiana clay mud. Then the mare decided to bump into me.

I am now flat on my back in mud, feet stuck like they were in concrete. Still had the horse though! 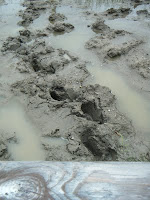 Luckily my wife and my 16 year old son were outside of the fence. While I laid in the mud, they ran back and turned off the electric fence. I tossed the lead to my wife and she lead the mare the rest of the way from the outside of the fence, the method she had suggested initially that I rejected. My son helped me to stand up (try standing up with your legs immobilized from the knee down with nothing to prop yourself up with) and now he was coated in mud as well. I was upright but absolutely couldn't lift my feet out of the mud. So I had him run back to the barn and get a shovel. Once I had that I was able to dig down around my right foot until I could get my heel to lift just enough to break the suction. Schlurp! Out came one boot. But the left foot was still stuck.

Here is the quandary. I was digging the left boot out and trying to lift it, but doing so was making my right boot sink deeper and deeper into the mud so I had to keep pulling it out and adjusting. I finally got both feet out and using the shovel as a brace managed to get to the fence where I promptly rolled under the bottom wire and out to freedom! At that point I looked down and saw just how muddy I was. I was coated in mud (which FYI is mixed with another, more...organic...material that originated from the business end of the horses). My wife wanted to take a picture. I gently declined.

I am sure I made a lovely sight. I was standing in the driveway getting hosed off fully dressed, mud sluicing off me. I was muddy in my boots, up the back of my shirt (the sight of which reminded my wife of changing a really bad diaper), on my arms and a bit on my face. Good thing I showered before I went out today! Soaking wet I dragged myself into the basement where I dropped my still kind of muddy and somewhat smelly clothes. Time for another shower!

So what was the net result of my labors on the farm? I managed to hammer in one fence staple, part of the way into the wood. The mare was out in the pasture where she belonged. It had been a pretty full day for me, so I decided to call it a day, go back in the h 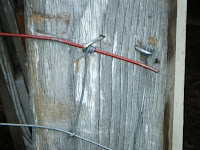 ouse and do some blogging where I was unlikely to get stuck in the mud. It is safer in front of my computer. I think I am better off blogging about farming than I am actually doing it.

Email ThisBlogThis!Share to TwitterShare to FacebookShare to Pinterest
Labels: farming

Loved it. Great memories I began as a dairy/pig farmer (draught horses and all), my wife a secretary.

John, it is way more amusing in retrospect. At the time, not so much!

LOL! Thanks for the laugh. Yeah, I'm sure you didn't find it humorous at the time, and I can only imagine how you "gently declined" to have your picture taken.

Don't hide behide your computer, though. Just listen to Eva next time! :)