The glory of God in dirt 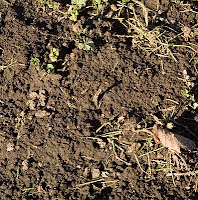 Dirt is a bad word. Getting dirty is almost always a negative thing. When my kids come in and their shoes are dirty but they walk on our carpet anyway, my wife is not delighted that they are getting her carpets dirty! There is probably nothing that is taken more for granted than dirt, nothing lower and less welcome. Here is the thing…

The glory of God is revealed in dirt

We know that God created dirt. He created all things and that includes dirt.

So God created dirt and He called it good.

That dirt He created does some other stuff. It is the place that He caused plants to grow…

All of the food that we eat comes from the dirt that He created. Those plants need rain and God drew from the ground

When no bush of the field was yet in the land and no small plant of the field had yet sprung up—for the LORD God had not caused it to rain on the land, and there was no man to work the ground, and a mist was going up from the land and was watering the whole face of the ground— (Genesis 2:5-6)

But God wasn’t done with dirt just yet….

then the LORD God formed the man of dust from the ground and breathed into his nostrils the breath of life, and the man became a living creature. (Genesis 2:7)

God’s crowning act in Creation in man and man was made from….the dirt.

Dirt is amazing stuff. We plant crops in the dirt. The rain falls on the dirt and soaks the ground and plants absorb their moisture from the dirt. As animals and plants deposit organic material (i.e. manure and dead plants) into the dirt, it rots in the soil and fills the dirt with nutrients which are then absorbed by plants, plants which we eat and feed to animals that we eat. Rainwater that is not absorbed by plants filters through the dirt which removes the impurities and it is that water that many of us drink from our faucet. The dirty mud puddles in my horse pasture will some day by clear, cold water we drink.

God is an amazing God because even in dirt He demonstrates His glory!
Posted by Arthur Sido at 10:00 AM