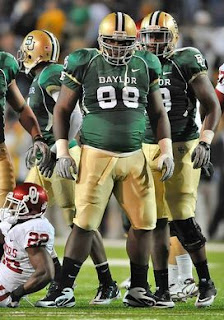 So my Browns traded down, traded back up and ended up last night with several extra picks this year and next and a slim little guy with a name that sounds more like an accountant than a first round defensive tackle, Phil Taylor. Phil is a mere 6' 3" and 334 lbs. Here's hoping he eats up running backs like he clearly eats at the buffet! On to rounds two and three!
Posted by Arthur Sido at 11:43 AM