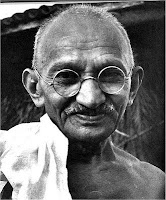 Gandhi is famously said to have said:

That quote drives me batty and is rolled out on a regular basis to chastise Christians for being so un-Christ-like, typically from the left. I get the point but I also think it is way off base, not in the second sentence but in the first. Did Gandhi really like Christ? Did he like the Christ that declared Himself to be the way, the truth and the life and the only way to heaven? Did he like the Christ that declared that those who didn’t believe in Him were already condemned? Did he like the Christ that John the Baptist said was coming in judgment: His winnowing fork is in his hand, and he will clear his threshing floor and gather his wheat into the barn, but the chaff he will burn with unquenchable fire.” (Matthew 3:12)? By all accounts, Gandhi was not a believer in Christ in any but the vaguest sense and certainly did not recognize Christ as Lord.

I think Gandhi and those who throw this quote around are enamored with the “Jesus as social do-gooder” image that sees Jesus as basically someone who came to be an advocate for liberal social policies and happened to get crucified by “The Man” along the way. That view of Christ is necessarily incomplete. The good news to the poor that Isaiah prophesied (Isa 61:1) and Christ fulfilled was not that there would someday be a social safety net system in Western democracies, it was that in spite of their poverty those who believe have a glorious eternity ahead of them. The Good News is that in spite of man’s total depravity, his sinful rebellion, that God sent His only Son so that through faith in His propitiatory sacrifice for the redemption of sin man could be reconciled to an infinitely just and holy God. That is apparently not what Gandhi believed and at the risk of being “judgmental” I don’t think Gandhi is going to like Christ much at all when he stands before the Judgment Seat.

Clever quips from unbelievers might make great tweets but they make pretty bad theology.
Posted by Arthur Sido at 1:14 PM

I have heard that quote before. I think your assessment is correct. Even many "Christians" today have little idea who the real Christ is.
There is an interesting story from Ghandi's life. Probably when in his twenties, he was in South Africa (at a university, I think). He visited a white Christian church and was turned away because of his dark skin - they thought he was "black." That was a turning point for him. Just think what could have happened if they had accepted him - demonstrating the love of Christ. Would he have gotten a true vision of Christ; and with his gifts, would India be a somewhat different place today? (I heard the story from J.T. Seamonds who had carried luggage for E. Stanley Jones, who knew Ghandi personally)

Hi Arthur, I am enjoying reading through your blog - I am a regular reader of Alan Knox's blog and found my way across. I am curious, would you prioritize a penal substitutionary view of the atonement?

If so, which scriptures could you point me to that you consider validate that view and could you comment on why it is necessary to interpret them the way you do? I am trying to find my way with regards to the atonement and your use of the word propitiatory made me think you may be an advocate of that view. Also, I have read a few blogs and books by people who not advocate the penal view (to state their bias before their words) who say that their is little evidence that any Christians held that view of the atonement before Calvin. Is that true? And if not, could you point me to someone who has done some work on it? Sorry, I know I am asking for a lot, just want to give this subject the attention it deserves. Thanks.

I guess I would prioritize penal substitionary atonement, although I recognize that more was going on there than "just" that. I would point to texts like 2 Cor 5:21, the picture of the cross in the substitutionary sacrifice in Leviticus 16, Hebrews 7: 27. Colossians 1:20. There are a ton of resources on Penal Substitutionary Atonement here:

It is a complex topic but I think that when you look at Passover, The Day of Atonement, the substitute of the ram for Isaac, etc. in the Old Testament as all pointing to the pefect sacrifice for sin of Christ in the New, you see a picture of a subtitute making atonement for His people to fulfill the penalty of sin.