My wife and I had a great evening last Thursday night at the house of some new friends, folks associated with the group I wrote about last week. They have been involved in this group for around twelve years and have been there for the ups and downs but they seem excited about what God is doing. I think there are other people who live near us that would benefit from being a part of this group, including my family!

What is challenging is that this group is in a state of transition. They are no longer associated with a larger worldwide group and that means there is some uncertainty about what direction to take. That is one of those things about simple church groups. Things rarely seem to be quite as formal and planned and that makes people nervous. We like predictability and routine and when you take away a lot of the controls and structures you can’t be certain what you are going to get.

It must have been like this for the first Christians. They came out of their religious traditions, many of them the highly regulated Jewish tradition, and into a brand new faith. While some people seem to think that there were established local churches running VBS programs and printing liturgical calendars the day after Pentecost, the reality is that the first century of Christianity must have been constantly in turmoil and uncertainty. They were persecuted, they were scattered, they didn’t have centuries of church traditions to cling to. They could only cling to Christ and to each other. I think that must have made them stronger by making them weaker. They had no political power, no military power, no legal defense groups to go to court on their behalf. Their signature attribute was weakness and when Christians are weakest, they cling most strongly to Jesus.

When you think about it, why should we seek to be strong, to be self-reliant, to be respected and powerful in the world? Don’t those things draw us away from Him and cause us to trust and rely in ourselves? It is fascinating to me that so often the earliest days of the church were examples of weakness and uncertainty. This was not a new religion out to conquer the world by brilliant arguments or by the sword. Christianity was a people of misfits and outcast that suffered great persecution and thrived in spite of it, or perhaps because of it. Think about the stoning of Stephen…. 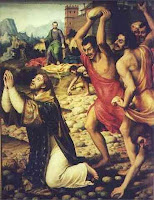 Now when they heard these things they were enraged, and they ground their teeth at him. But he, full of the Holy Spirit, gazed into heaven and saw the glory of God, and Jesus standing at the right hand of God. And he said, “Behold, I see the heavens opened, and the Son of Man standing at the right hand of God.” But they cried out with a loud voice and stopped their ears and rushed together at him. Then they cast him out of the city and stoned him. And the witnesses laid down their garments at the feet of a young man named Saul. And as they were stoning Stephen, he called out, “Lord Jesus, receive my spirit.” And falling to his knees he cried out with a loud voice, “Lord, do not hold this sin against them.” And when he had said this, he fell asleep. (Acts 7:54-60)

Here is a man who was being stoned for preaching Christ and beheld Jesus as he was dying. His last words were not a condemnation or a call for justice, he prayed for forgiveness for those who murdered him. What a far cry that is from the church today! Or the witness of the Anabaptist martyrs who went to torturous deaths praising God. Why do we seek security and freedom in all the wrong places, places that will always disappoint, instead of in the one place that will never fail us, in Jesus Christ and Him alone?

I am looking forward to spending more time with this group of Christians and hope that we can be a blessing to them. There are so many people in our area who need to hear about Christ and so many Christians seeking fellowship beyond pews and pulpits. These brothers and sisters will probably never fill sanctuaries with crowds of people but I am certain we can have an outsized impact on our community if we cling to Christ and trust Him to build His church.
Posted by Arthur Sido at 3:30 PM

There have been Christian martyrs since their have been Christians. Anabaptist martyrs are first and foremost Christian martyrs. As Christians, we can safely assume, that at some point in time people in our faith tradition have been persecuted and sometimes put to death for their belief in Jesus Christ.
It is unfortunate that some were martyred and persecuted by other Christians who had a different faith tradition.
We need to see in those that are martyrs that they died for their beliefs, they did NOT renounce Christ, and we must forgive their persecutors, because the martyr certainly did, and learn and do everything in our power to live with our Christian brothers and sisters in peace, accepting that each is called to be a CHRISTIAN first, and then accepting that each will find their own way to worship, be it a main stream denomination, a non-denomination, a home church, a mega church, a small church. We have to remember that the Christian life is a walk that we are on throughout our life and we are all at different places, no one way is better than the other, as long as you are walking with Jesus Christ.