Can Christians take up the sword? - The pro-sword view 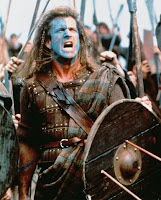 Admittedly, and I think anyone who is honestly approaching this issue has to recognize this, there is scant Biblical grounds for a Christian to take up the sword. There are lots of philosophical and pragmatic arguments. But the New Testament is unequivocal about it's condemnation of the use of violence either in aggression or self-defense. I am going to try to lay out the arguments in favor in this post so that there can be a balanced discussion.

Again, the issue here is not about the state. Was the United States justified in going to war in World War II? I certainly think that you can make that case pretty easily. I am talking about followers of Jesus Christ doing the same.

One place you might look is into the Old Testament. Certainly there is no lack of examples of God’s people going to war against the pagan nations. God commanded His people specifically to war against other nations to drive them out of the land and in doing so often called for a scorched earth style conquest where no one was spared. Is that a applicable for Christians under the New Covenant though?

There is the centurion with the ill servant in Matthew 8: 5-13. As a leader of men he humbly comes in faith to Christ and asks Him to heal his servant. Jesus commends his faith and heals his servant, but doesn’t condemn the centurion for his line of work. Of course Jesus also heals and forgives all sorts of sinners without advocating that people commit sins.

He said to them, "But now let the one who has a moneybag take it, and likewise a knapsack. And let the one who has no sword sell his cloak and buy one. For I tell you that this Scripture must be fulfilled in me: 'And he was numbered with the transgressors.' For what is written about me has its fulfillment." And they said, "Look, Lord, here are two swords." And he said to them, "It is enough." (Luke 22:36-38)

So there is a place in one of the Gospels where Jesus tells His disciples to buy a sword. That seems a bit puzzling since a few verses later Jesus chastises Peter for striking someone with a sword. I am not sure why he seemed to be telling Peter to make sure he has a sword and then chastising him for using it.

Romans 13 details the legitimate use of the sword by the government. We are to be in subjection to those rulers and pay what taxes we owe (as I pointed out this would include taxes legally owed that might go to pay for war). So I have seen the argument that serving in the military, where mandated by law (like in a draft situation), is covered under by this chapter. But what about Shadrach, Meshach, and Abednego? They disobeyed the law of man because they refused to disobey the law of God. Also in Acts 4: 19-20 we see the disciples claiming that following the law of God was more important than the law of man, even though in doing so they faced the possibility of imprisonment and execution.

In searching for common sense Christian writers speaking in Albert Mohler, someone I greatly respect as a thinker and theologian, wrote about the idea of "just war" in April of 2004: Is War Ever Justified? A Reality Check. Dr. Mohler puts forth an interesting, well-thought out but strangely Bible-less argument.

War is a demonstration of the utter sinfulness of sin. In the name of the Prince of Peace, Christians must seek to establish and maintain our faltering and transient efforts at peacemaking until our Lord comes to establish the only peace that endures. In this fallen world, we must honestly acknowledge that peacemaking will sometimes lead to war. In the final analysis, war is the worst option imaginable, until it is the only option left.

I think that is lacking. For an essay, which granted makes lots of sense to this sinner, written by one of the preeminent contemporary theologians in America there is a deafening silence where Christ has spoken. Jesus doesn't say "blessed are the peacemakers except when they run out of options". The cross stands as a stark reminder that sometimes, perhaps oftentimes, we are called to be persecuted, to be offended, to be attacked and even killed.

That is a pretty scant list. Am I missing something? Can you think of other verses that would support taking up the sword, whether in warfare or in self-defense?

Email ThisBlogThis!Share to TwitterShare to FacebookShare to Pinterest
Labels: nonresistance, the state, the sword

In this comment I'd like to address the "scant support in the New Testament" argument for any currently interesting topic. The principle applies to much more than just the matter of the rightness or wrongness of killing (which I notice in passing you change to "violence" for the principle).
Let us take the example of recompense. In the Old Testament times if you robbed someone you were required to make good the loss and more. Now, in the NT there is no requirement laid on any thief (on repenting of his sin) to repay what was stolen or any more than that. Did that mean the Old Testament law was no longer in force? I don't believe it would be right to claim that. The law would have been heeded unless there was a clear command from God to the contrary.
There is one solitary example which might be used to speak to the matter, Luke 19:1-10 - the case of Zacchaeus, who (when he repented) told Christ he would repay not just the money he had stolen from the people but four times as much. Jesus made the point (Luke 19:9) that Zacchaeus was also a son of Abraham (as he had shown by his heeding the Law of Moses) and was just those that he had come to save.
Is the one example enough - it's pretty scant evidence to say the command was still in force isn't it? If it is clear from the OT that this should be done and we remember (as we should) that these people hold the OT in reverence as the Word of God it should be. Certainly I am sure we will find many of the things Jesus taught against the abuses of his day have clear roots in the OT. Why should we argue differently?
Sometimes we need to remember that (when we ask the question: "Does the Bible teach ...?") the New Testament is built on the foundation of the Old which means that what was true then should be true today - unless we can show where God has set it aside. Jesus, after all, did not come to destroy the Law - he came to fulfill it.

I'm going to disagree with you on a few points here. For what it's worth. I know we're not holding guns to each others' heads on these views and feel confident we won't be in the future.

I think Ex. 22:2 covers this fairly well. "If the thief is caught while breaking in and is struck so that he dies, there will be no bloodguiltiness on his account." This shows that lawful defense using lethal force isn't limited to only personal bodily protection, but to property as well.

I don't believe that WWII was a just war on our account, and I'm not sure I can say anything different about any of our wars since the 19th century. A few things God made clear (I'll have to search for verse addresses later) about war were that those who had any fear or who were recently married had no obligation to serve. He also warned the people through Samuel that Saul would be a tyrant and subject the people to conscription. So, I believe a military draft to be extremely unbiblical. I have small children, and if the time ever came about where they were drafted for war, and they didn't want to serve, I would have no problem whatsoever in helping them avoid the draft.

As for Peter being chastised for cutting off the slave's ear, I believe Jesus wasn't chastising him for using the sword, but for the singular issue of standing in the way of his crucifixion.

I agree that Jesus came to fulfill the law, not to destroy it. He also brought the gospel of love, peace and grace. Which, based on scripture, trumps the old "eye for an eye" law, no?