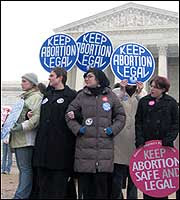 When is it murder, when is it a choice?

One of the leading news stories today is the conviction of one Bobby Cutts Jr., a former police officer in Ohio. Mr. Cutts was found guilty of two murders, one of his girlfriend and one of her unborn child...
CANTON, Ohio — A former police officer who tearfully told jurors he accidentally killed his pregnant lover was convicted Friday of murdering her and their unborn child.
Bobby Cutts Jr. could face the death penalty. He had claimed he accidentally killed Jessie Davis by putting an elbow to her throat, then panicked.
Cutts, 30, was convicted of aggravated murder in the death of the nearly full-term female fetus, which carries the possible death penalty. Jurors will return later this month to weigh a sentencing recommendation.
The jury found him not guilty of aggravated murder in Davis' death, a count that includes intent to kill with prior calculation. But they convicted him of a lesser charge of murder in her death.

Here is a silly question. Why is it that this man is being convicted of aggravated murder for the killing of an unborn child, yet the mother of that child could walk into an abortion clinic and have that baby murdered and be protected by the law? What is the difference? Because in one case it is a guy killing the baby and in the other it is the mother? Don't get me wrong, I think he should be convicted of murder for killing that child, but does anyone else see the hypocrisy in a legal system where one parent can be convicted of murdering an unborn child and the other can have that child murdered by a stranger and have it be completely legal? It can't be both ways. An unborn child is either a person, legally protected under the law, or not. If it is murder to kill an unborn child under some circusmstances, it ought to be murder under any circumstances.
Posted by Arthur Sido at 9:27 PM

Email ThisBlogThis!Share to TwitterShare to FacebookShare to Pinterest
Labels: abortion