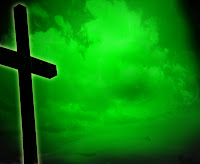 As I wrote on Mormon Coffee, the Mormon point of view on faith/works makes sense within their system. It makes no sense within the context of orthodox Christianity. Mormons have a legalistic system that serves the purpose of keeping the memebers of the sect in line. In their program, the member must keep working, keep striving for the brass ring of being a god. I sense a certain arrogance within the Mormons based on their belief that they are righteous based on their works.

All very true, the idea of personal worthiness is so very important in mormonism and so very prideful. The idea that I am worthy, more so than my neighbor, is the same sort of pride we see causing untold trouble throughout the Bible. But being a former mormon, I know how hard it is to be convinced of the truth. It is a job that as men we are poorly equipped to do, it is a work that only the Holy Spirit of God can accomplish.

I enjoy reading the testimonies of former Mormons. What I'm most interested in is what caused them to begin questioning Mormonism. I think often times it's the defeated, discouraged feeling that comes with being in the works based program. Performanced based religious systems that demand more and more while at the same time inflicting guilt on the practioner results in a false piety on one hand and defeatism on the other.

In my case it was not so much questioning, as a sudden seperation. One day I was on my knees praying as a good mormon and God broke me heart to the lies of mormonism. When I knelt I was caught up in mormonism, when I stood up I was convicted to leave mormonism and never look back. I am working on posting our testimony, I should get around to it someday!

Please take the time to post your testimony. I wonder if you could help me understand something. I've noticed that Mormons have a desire to know God, are attempting to live a righteous life, and claim to hear individually from God and have "spiritual" experiences. It's the latter that I'm curious about. What type of spiritual experiences/phenomonon are they claiming to have? It would seem that these experiences reinforce, in their minds, that Mormonism is "true". Can you shed any light on this?

Much of mormonism is based on a subjective emotional experience. There is a reason that there is not a theology department or theology degree program at BYU, because the evidence for their belief in the BoM, the prophets, Joseph Smith all tie back to the "burning in the bosom" that serves as ratification of the truth of the BoM.

When people are called into positions of service in the church, it is allegedly the Spirit that directs the selection (I have been part of the process, it is a lot more pragmatic than spiritual). Before mormons marry, they seek spiritual confirmation. This is not merely praying for a good mate, but an expectation for direct contact and direction from God. Mormons believe to certain extents that God communicates directly with their prophet, even to the point that it has been suggested (not in official dogma) that Jesus Christ Himself meets with the church president in the Holy of Holies in the Salt Lake Temple. Faithful mormons receive "patriarchal blessings", given by one of the oldest men in the stake, a one on one blessings that gives prophetic advice about the future, declares which of the 12 tribes that person is a member of, etc. Even the temple is designed to be a highly spiritual experience, a life altering one. When we went through, we noticed that first timers seem to give very early in the morning and we were exhausted at the end. It was not spiritual for us at all, it was actually pretty creepy.

But you are correct, mormons seek spirital experiences to confirm the truth of the restored "gospel". Mormon culture is full of anecdotal, faith affirming stories that are designed to confirm and strengthen their ties and allegiance to the church. Most of what goes on is simply good old fashioned cultic mind control (if you get the burning in the bosom, the church is true. If you don't you aren't praying sincerely, there is some unconfessed sin in your life, etc.)

I didn't realize there was no theology department at BYU. That's really revealing. I've been interested in the topic of spiritual phenomenon for a long time. If you look at times of revival all sorts of things can happen when a group of people get together. This would include things like "holy laughter", falling under the power, roaring etc. For me the challenge is sorting out the movement of God's Spirit from other causes. I'm sure the power of suggestion plays a big role in the Mormon spiritual life. In your opinion, would what you went through in the temple be considered occultic or just something akin to an initiation into a club?

It was definitely occultic. From the build-up to it to the prohibition on speaking about it later (I remember my wife and I looking at each other as we drove away kind of saying "What was that", but we were forbidden to speak about it, even as a husband and wife who just went through it), all of it is designed to enhance the "spiritual" experience. I look back now and can see that those ceremonies and rites had nothing to do with Christ. They are pretty on the outside, but inside Satan's work is being done.

Arthur,
I'm curious, what pushed you over the edge and out of Mormonism? What was the tipping point?

I finally posted our testimony, it should flesh out some of the details of what pushed me over he edge...see the top post on the main blog page.