The mormon church holds that the "priesthood" was lost after the death of the last of the original apostles and in large part because of the loss of the priesthood, the church fell into apostasy until it was restored to Joseph Smith in 1829, and then passed on by the laying on of hands up to modern days. It is one of the major tenets of mormonism that the prophets of the church hold the keys of priesthood authority and as such have exclusive authority to speak on mattters of doctrine in our days. You can read the mormon official version of these events here. 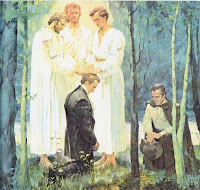 In our mormon days I was bestowed this priesthood and given a lineage showing the trail from Jesus Christ to the apostles to Joseph Smith to Brigham Young and so on, until we see Peter Kilger from New Hampshire granting that same priesthood held by Peter, James and John to me. The top image is that lineage. The whole letter is below...this priesthood was stripped from me, along with all of the blessings that accompany it when I requested my name be removed from the membership list of the mormon church. I need to track that letter down and post it online as well. 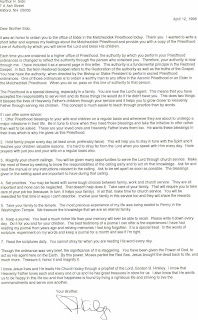 Arthur, just found your blog through Mormon Coffee. I would be very interested in reading your "got kicked out of the church" letter.

Also, I've been having discussions with a Mormon who considers himself a more scholarly fellow than most. I just haven't had nearly the time he has to post, but perhaps you'd like to contribute. Currently, we're talking about the embodiment of God here:

wanted follow up posts to be emailed to me...

I will try to get that letter scanned, it is a pretty brief form letter, but receiving it was liberating for us.

I will stop by, it looks like the anonymous "Yellow Dart" is pretty impressed with himself and his alleged academic credentials. I am always a bit skeptical of people who make such grandiose claims about themselves and yet refuse to provide any proof of their identity...

Wow, that is really interesting. That would be interesting to see their letter.

I did not realize how similar the ideas were to Roman Catholicism.