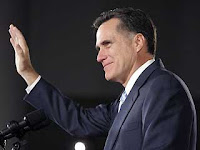 In a somewhat surprising move, at least this quickly, Mitt Romney has dropped out of the race to be the Republican nominee. It was a pretty classy exit statement:

Mitt Romney suspended his presidential campaign Thursday, telling a stunned conservative group that continuing his uphill battle against John McCain would hurt the Republican Party and make it more likely that the Democratic candidate would win the general election in November.

“If I fight on in my campaign, all the way to the convention … I’d forestall the launch of a national campaign and frankly I’d be making make it easier for Senator Clinton or Obama to win,” Romney told the Conservative Political Action Conference. “Frankly, in this time of war, I simply cannot let my campaign, be a part of aiding a surrender to terror.”

As early as yesterday, the Romney campaign was drafting a road map to winning the nomination, despite trailing McCain badly in the race for delegates. But according to a campaign spokesman, Romney decided to drop out as he was writing the CPAC speech late Wednesday.

I assume Huckabee will follow shortly, and the party can begin to rally around McCain. Time for the Rush Limbaugh/Ann Coulter cabal to swallow their pride, keep McCain honest from a conservative standpoint but quit bellyaching and threatening to support Hillary or stay home. Romney was very gracious in defeat and bowing out, his supporters should take their cue from his actions and support the nominee. Not everyone is being gracious about it though:

Evangelical leader Pat Robertson told FOX News Radio Thursday morning that he and other evangelicals would not support McCain, citing his temper.

Robertson referenced a Wall Street Journal article describing him as a “capped live volcano,” adding: “You never know when he’s going to explode … If you’ve got a guy who’s the commander in chief with his hand on the red button, I just don’t know, I wouldn’t like to be in WWIII, and I just have a feeling he wants to show how macho he is and we might just get ourselves in something we don’t want.”

Uh, someone who called for the assassination of the leader of a foreign nation and has prophesied untold destruction on America is being critical of someone else for being intemperate and unstable? McCain may be a hothead, but he served this nation in war and spent years being tortured by the North Vietnamese. He knows far better than the vast majority of Americans, including Pat Robertson, what war is really like.

I hate to break it to you Pat, but you ceased to be relevant to Christians as a whole many, many years ago. I don't know of any Christian under the age of 60 who gives a rip what Pat Robertson says or thinks. He has become like the crazy old great uncle at family events that people tolerate because they are trying to be polite. He has no business and no right declaring who evangelicals will or will not support.
Posted by Arthur Sido at 2:22 PM

And now... we conservatives are faced with a decision.

The talk of Pat Robertson endorsing Rudy Giuliani now means nothing (not that it ever did!)

Neither does anyone care about the wide evangelical support that Mitt Romney won over.

We now have, on the left, Senator John McCain whom Dr. James Dobson says "is not a conservative, and in fact, has gone out of his way to stick his thumb in the eyes of those who are. He has sounded at times more like a member of the other party." John McCain promotes amnesty for illegal immigrants, he called Samuel Alito "too conservative" (a good indication of the judges he would appoint), he supports embryonic stem-cell research, and he has little regard for freedom of speech.

On the right: Governor Mike Huckabee, with 10 years of experience governing, a staunch pro-life record, and a proven force for defending marriage and religious liberties. During those 10 years, he reduced welfare roles by 50%, returned $400 million to taxpayers, and was called "One of America's Best Governors" by TIME Magazine.

Governor Huckabee's platform calls for secure borders, supporting the military, and reining in the rising costs of healthcare and energy through practical, market-driven methods.

And today, there is finally justice as Dr. Dobson endorses Gov. Mike Huckabee.

Conservatives need to back Governor Mike Huckabee for the good of our nation. Or do we have Hillary or Obama fans out there?

The lack of enthusiasm for Huckabee is baffling and, frankly, a betrayal of a man who has faithfully served his country--with conservative principles guiding his every step.

Can conservatives of all stripes unite around what we're FOR, rather than what we're AGAINST? If so, our values just might be represented in the White House come '09.

If we just want to sulk on the sidelines of this political race, then forget it. Let the 4 years of disaster begin, as some commentators have put it.

Vote Huckabee! And support his campaign!

Fair enough Josh. I voted for Huckabee when we voted in Michigan, but realistically he has virtually no chance to win the nomination. So the question, idealism aside, is do we rally behind Senator McCain (who holds some positions to the left of me granted) or do we pout and see Hillary or Barack win? If you can't see the clear difference between McCain and Hillary/Obama...

I am glad to see Romney out of the race and that he did hold himself to some code of conduct.