Book Review: Against The Wind

Against The Wind is the biography of Eberhard Arnold, the primary founder of the Hutterite group known the Bruderhof. Against the Wind is available without charge from Plough Publishing in e-reader or PDF format here, something I appreciate. The Bruderhof are an Anabaptist group modeled in large part on the Hutterites. They are an outworking of the study of Eberhard Arnold, a brilliant German theologian from the later 19th/early 20th century. Against the Wind tells the fascinating story of this man who was equal parts servant, theologian and visionary. 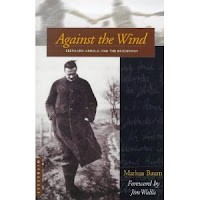 Eberhard Arnold was a German theologian who took the rare step of taking his theological study and putting it into practice. Born in 1883, he lived in a tumultuous time for Germany, from the turn of the century to the first World War and the early days of the rise of Nazism. Coming from an educated family of privilege and social standing he eventually died as the leader of a group that practiced community of goods and rarely had much to eat. While he benefitted enormously from the educational opportunities afforded him by his upbringing and always seemed to value education, as he grew and matured he seemed to shed much of what the world considers important for a Christ-centered life. During his life he got to know many other famous theologians from Karl Barth to Dietrich Bonhoefffer and had a marked impact of theological life in Germany. He is one of the most important theologians you have never heard of. Maybe Eric Metaxes can do a bio on him!

Arnold was not a man without flaws and I appreciate that while this is definitely a friendly biography, areas where Arnold made mistakes are not glossed over. Notably Eberhard was caught up in German enthusiasm and nationalism in the run up to and during the first World War. Yet coming out of that horrific war on the other side, Arnold’s views radicalized quite seriously as applied to nationalism and militarism and he became what can only be described as a Christian pacifist in the later years of his life, something that would put him at odds with the rising power of National Socialism in Germany under Adolf Hitler in the 1930’s. He tried to reach out to Hitler and used respectful language that seems jarring to us today although we have the “benefit” of knowing the full horror of the Nazi regime but I think it was done out of a respect for civilian authority and not any sort of adminration for Hitler. I also get the impression that Eberhard was prone to being faddish, that something new and exciting would catch his attention, but through it all he kept his eyes on the cross.

I think Eberhard understood the inherent dangers of a radical life, not dangers to life or property although those certainly are true, but spiritual dangers. A radical life of community can brings its own subtle but dangerous challenges, challenges like legalism, divisiveness and even pride. Arnold knew and said what should be obvious, not every Christian is called to the sort of total community that is practiced by the Brudherhof, Hutterities and other Christian groups, although all Christians are called to community of some sort. Some of his spiritual progeny have slipped into apathy and isoloationism or a belief that their way of life is the only proper one for Christians but that certainly was not something that Arnold taugt. As I said earlier, unlike many theologians Eberhard Arnold was not a man content to talk and write about the Christian life, he lived it right up until his death. For anyone interested in Anabaptism, in community, in radical church life I can recommend Against the Wind without hesitation. In a day and age when a pretty mild book about being “Radical” causes a huge storm of controversy, it is instructive to see what an actual radical life of discipleship looks like. I also believe that the principles of a community that depends on and supports one another are going to be priceless in the days to come in the post-Christendom era. We have much to learn from the Anabaptists!

Against the Wind only covers the life of Eberhard Arnold, so you miss much of the history of the Bruderhof as they flee Germany when Europe descended into war, leaving for England and then having to leave England because of distrust (Germans living in England in the middle of World War II were looked at with some suspicion apparently), moving to Paraguay and eventually relocating to America in the 1950’s. You can learn more about their history from their webpage. It is an interesting story to say the least.
Posted by Arthur Sido at 11:35 AM