The Feminization Of Culture, "Toxic Masculinity" And The Rise Of The Antifa and Alt-Right

America has a serious problem. We appear to be ripping our collective self apart in increasingly loud and often violent clashes in the street. The most infamous and most misrepresented of these clashes was in Charlottesville, a topic I have written about several times, but it has been going on for a long time, well before Trump. In this fray we see the rise of two prominent groups, the alt-right and the antifa. They are allegedly on two opposite sides of the political spectrum but one thing is common between them: there are an awful lot of young White men in both groups.

Setting aside some of the old guard like Jared Taylor and David Duke, and you see the bulk of the alt-right made up of younger White men. Richard Spencer, who likes to style himself the leader of the alt-right, is fairly young at 39 and is one of the older leaders of the alt-right. Nathan Domingo is 30 or 31. A cursory glance of others shows that most leaders are under 40 and almost all are under 50. The attendees at the rallies are largely young White men in their 20's. That makes sense given their message that resonates with that demographic.

What is somewhat more surprising is how many young White men are part of the "antifa". 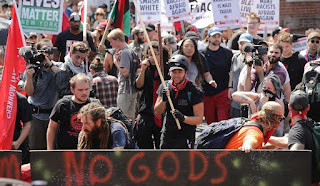 When you see people waving antifa flags, often with Soviet flags thrown in for good measure, or you see "Black Bloc" groups of masked individuals at protests/riots or someone assaulting someone else, it is more often than not a White male behind the mask.

Why is this? Is it because they are into justice and fighting fascism? I don't think so. I think is is inextricably linked with the state of men in this country. National Review quoted Nicholas Eberstadt on the state of the male workforce in America. The numbers are staggering...


Almost one out of four men of prime working age (25–54) are not working. Since 1948, the percentage of men aged 20 to 64 who aren’t working has doubled. Fewer working-age men are working today than in 1930, in the heart of the Great Depression.

Most of this decline, however, has taken place since 1965. Between 1965 and 2015, the share of working-age men who are jobless more than doubled, from 10 percent to 22 percent. Among “prime age” men, the percentage without jobs shot from 6 percent to nearly 16 percent. Some of these men are in training or education programs. But the vast majority of men in this age range who are receiving training or are in school are job holders, working part-time or working full-time and going to school part-time.

What does that work out to? An awful lot of men..


Eberstadt estimates that if you deduct men who are going to school instead of working, the number of working-age men without work is still almost 10 million, or about 10 percent of the working-age male population.

Ten million men without work. Most of them not even looking for work. So what do they do with themselves besides play video games?

I think a major part of the issue is that you simply can't undo being male. You can park young men on the couch but you can't stop them from being men. Being a man means being task oriented, having goals. While women seem to be motivated by relationships and connections, men are mostly interested in achievement. When these men run out of levels on video games to achieve, they are seeking something else. They don't have jobs and even those that do don't have a very bright future. A reader wrote a comment to Rod Dreher about this very issue and I liked what he said:


They are boys searching for meaning and purpose. They wish to be warriors, but they see no dragons to slay. They want to be heroes, but they can find no one to save. Instead, they are told that they are the monsters, it is they from whom others must be saved. If they want to do their part, they can kindly walk to a dark corner, sit down, be quiet, and wait to die. If they want a few bonus points, a few nods of approvals from their masters (who are overwhelmingly all women, K-12), they can turn traitor against their sex, and ritually abase themselves and beg penance for the sins of all men. They can read stories and write essays about weak men and strong women. They can write poems about evil men and victimized, and therefore virtuous, women. They can be “allies”, second-class citizens in the righteous war against patriarchy, and seek whatever scraps of meaning they can find from slandering their own fathers and grandfathers.

That dovetails with a lot of what I have written. The entire letter is much longer and well worth reading. 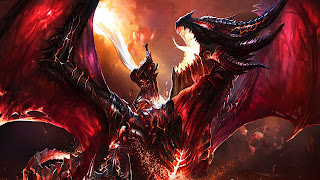 In other words, I think that the same thing that motivates the alt-right also motivates the antifa. The alt-right sees young White men under assault and threatened with extinction. There are dragons to be slain (not literally): globalists, communists, feminists, often Jews and blacks. The antifa also have dragons to be slain, they imagine themselves as noble defenders of equality out to smite the Nazis just like the Allies landing on Normandy beach, just with more racial and gender diversity. It is OK to "punch a Nazi" because they are Bad People. Fighting the other side gives them a purpose that their life is otherwise missing.

This is not necessarily true of older members and leaders of the alt-right and the antifa. Someone like Theodore Beale, aka Vox Day, has a far more nuanced and thought-out reasoning for his alt-right views. So do a lot of the older leaders of the antifa, many of whom are out and out neo-Marxists, but the older leaders of both sides are largely past the dragon slaying stage. They have serious goals beyond tiki torch rallies and Nazi punching. But the wannabe dragon slaying young men are a perfect pool to recruit from.

This situation is the result of the cult of "toxic masculinity". From mansplaining to "rape culture", men are blamed for literally every problem in our society. There are many rather loud voices that would not lament the utter elimination of men in our society. Nothing good comes from men, everything bad comes from men. This has an awful effect on young men that have been fed this garbage their entire lives. As the reader quoted above says, young men want to fight the monsters but are told over and over that they are the monsters simply by virtue of being male.

While our culture may have once been properly considered "patriarchal", as if that were a bad thing, it has now overwhelmingly swung the opposite way and men are left out in the cold, especially White men. We need more women in this, we need more minorities in that. What we absolutely never need more of in any situation is White men. Some of these young men seek redemption by becoming the violent foot-soldiers of the Left, others by fighting back as they see it and joining the alt-right. What do you expect them to do, sit around playing video games and shooting heroin until they die?

The church is not any help. More and more the institutional church is a feminine activity with pews dominated by women and pulpits filled with men who seem in terror of those pew occupying women. Do you think young men see being a preacher as a manly job? We have lost our respect for masculinity in the church even though most pulpits still have men occupying them. Church activities are either passively sitting or something like a potluck or Fall festival. Right now the church is rarely a viable or interesting alternative for young men to the alt-right or antifa. Come to church and sit around for an hour in a room full of women and if you are lucky there might be a potluck afterward. Bring a dish to pass! I wish more young men saw other men in disaster relief and other manly activities but that is pretty rare to see and you can be sure they are not hearing about it from the media. Church as an event for old women and soft men is not a solution to this problem.

We have to stop buying into the farce that men are a problem to be tolerated in our society. Men built this society and it is flawed for sure but better than any other major civilization that has ever existed. The laws we have, including the ones giving women the right to vote and freeing the slaves, were passed by men. The roads we drive on, built by men. The buildings we live in, built by men. The cities and towns we live in were built by men after the land was cleared by men. When there are dragons to be slain, we call the men. When there are fires to put out, we call the men. As Hurricane Harvey shows, there are lots of time when we need men and there is no substitute for a man. That is not to denigrate women, just a simple recognition of facts. Our society needs men and it needs men who act like men. If we keep shouting at men and telling them to get out of the way, they might retreat for a time to the couch but sooner or later, and we see this now, they are going to find a new outlet and that might be the antifa or the alt-right or perhaps something else but it will be something. Instead of trying to shame and blame men, how about trying to find ways to encourage them. A man with a purpose and with goals and with encouragement is less likely to pick up a tiki torch or start throwing bricks at cops. Men don't need much but not screaming at them "This is all your fault!" would be a good place to start.

Young men are pretty low maintenance. Some basic guidance and letting them be men would do wonders for them. Here is a decidedly non-PC addendum. It would do wonders for young women as well. I don't think girls are excited about a generation of couch-sitting/rock throwing/tiki torch waving boys. Both men and women, and especially children, are going to be better off we we allow and encourage young men to act like men and young women to act like women. Call out those who would denigrate masculinity, refuse to chuckle when masculinity is made light of. This world desperately needs men who are men, and right now we are raising a generation with very few of them.
Posted by Arthur Sido at 1:51 PM