Of the questions of the day that generate mostly a lot of smoke and confusion, not to mention anger, the immigration policy and enforcement of said policy in the United States is right at the top. This is especially true in the church. A few weeks ago Christianity Today posted something that I found to be extraordinarily unhelpful, even by CT standards.

Wow, that is powerful! Except the article doesn't make the case for that. I believe we call that "click bait".

I can have serious concerns over increasing Muslim migration to the U.S. and Europe and what that means for our liberal democracies, and I do, and I can believe that theologically, historically and empirically what Islam teaches is not compatible with liberal democracy, which is true and I do believe, without saying "Muslims don't belong in America". The First Amendment absolutely applies to Islam and I am not advocating we round up and deport legal U.S. citizens who practice Islam.

That isn't really the point of the article anyway which makes the headline doubly misleading. Here is the money quote I came away with, from the "missions experts":


As CT reported in March, missions experts worry that evangelicals’ views of Muslims are sabotaging a long-dreamed-of moment. Previous research by Pew found that only 35 percent of white evangelicals say they have a personal connection to a Muslim, compared to about 40 percent of mainline Protestants and Catholics, 50 percent of unaffiliated Americans, and 73 percent of Jews.

“This is the best chance we’ve had in human history to share the love of Christ with Muslims,” said David Cashin, intercultural studies professor at Columbia International University and an expert in Muslim-Christian relations. “Because of these attitudes, we could miss the opportunity.”

Let me provide a nuanced and theologically rich response: Baloney.

There are several reasons why I say that. First is the nature of the Great Commission. As a reminder, here it is, emphasis added:


Now the eleven disciples went to Galilee, to the mountain to which Jesus had directed them. And when they saw him they worshiped him, but some doubted. And Jesus came and said to them, “All authority in heaven and on earth has been given to me. Go therefore and make disciples of all nations, baptizing them in the name of the Father and of the Son and of the Holy Spirit, teaching them to observe all that I have commanded you. And behold, I am with you always, to the end of the age.”Matthew 28: 16-20

The Great Commission is a sending command. Obviously we evangelize where we are but the model in the Scriptures also includes the sending of those called to evangelize the nations. It absolutely does not imply having Caesar form immigration policies so we can bring the lost to where we are without the slightest concern over the impact on civil society. It reminds me of people who think that having the government confiscate the earnings of some people and transferring those earnings to people that did earn them somehow is fulfilling our obligation as the church to care for the poor. I agree the church needs to do more to reach the people of the world with Christ and that our spending priorities as the church ought to reflect that. It doesn't follow that we should encourage people to leave their own lands, lands that are indeed often a mess thanks to foreign policy intervention by the U.S. cheered on by American evangelicals, in order for us to "reach" them. That brings me to my second point.

The second point is simple pragmatism together with a dose of reality.

The United States contains some 325,000,000 people. Reports of religious affiliation vary widely so I just had to choose one for a very rough estimate. Here is a chart from Wikipedia because :visual:. 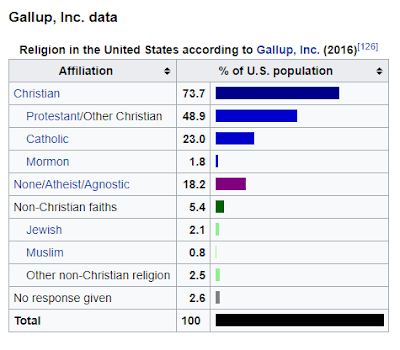 Almost a quarter of a billion people. That is perhaps the richest and ripest mission field in the history of the church and it is literally within walking distance of virtually every Christian in America RIGHT NOW.

Over two hundred and forty million people in this country that are lost and hell-bound no less than a man in Somalia or a woman in Afghanistan. The middle-class guy who belongs to the Rotary Club and loves his kids but doesn't know Jesus goes to the same hell as the ISIS fighter in Iraq raping and killing Christians.

The top four states in the U.S. in population combined (California, Texas, Florida and New York) have about 107 million people in them. By my crude calculations those four states alone have 80,000,000 people that are lost.

I am not saying we don't have an obligation to reach the Muslims with Christ or to send and support missionaries and native evangelists in their homelands. I am saying that while it is less sexy, we have plenty of lost people right here, right now.

The lost in America ought to be low hanging fruit and give us the most evangelism bang for the buck. They are already here. They speak the language. The vast majority of them already have connections with Christians. They have a shared cultural understanding of things like the Virgin Birth and the Resurrection. They have or can get their hands on a Bible with absolutely no effort in hundreds of formats for free. I can't imagine that there are a significant number of people in this country that are not in easy commuting distance of a church.

I would hate to think that the idea of evangelizing an exotic people like Middle Eastern Muslims is more appealing to us than evangelizing our neighbors and that we get more street cred or, dare I suggest, fund-raising power by talking about evangelizing Muslims than evangelizing Roman Catholics in Boston or people in Appalachia. Doesn't it seem to make more sense to support mission work by natives in their native land to Muslims, working with people where they are in the language they speak in the cultural setting they are comfortable with?

Bringing in people with the intent of evangelizing them when they arrive when we already don't effectively evangelize the people that are here seems naive at best. What exactly are Muslims going to find when they come here?

We obviously are not evangelizing the people that live across the street from us but Muslims are going to magically be reached with the Gospel. Are they going to become Christian by osmosis? I would suggest that the very worst evangelism tool we have is the state of American cultural Christianity. A Muslim coming to America is going to see a "church" made up of the unregenerate with a blind eye turned toward sexual immorality and divorce, with many "churches" embracing homosexuality. That isn't appealing to me and I am already a devout Christian, why would a Muslim from Syria find that something to abandon her native faith for?


Conversion and interfaith marriage among US Muslims have remained relatively stable: 1 in 5 Muslims in America is a convert, with 53 percent joining the faith from a Protestant background and 20 percent from a Catholic background, according to Pew.

Meanwhile, 1 in 10 American Muslims have a Christian spouse, as do 1 in 5 of those whose Islamic faith is less important to them.

So 20% of current Muslims in America are converts, mostly from a "Protestant background" or Catholicism. Not to mention a bunch of Muslims with a "Christian spouse" who apparently skipped the sermon on being unequally yoked. It sounds to me like someone is reaching the other faith for converts but not the way that CT seems to dream will happen. That isn't a reason by itself to not encourage mass migration but I am not sure that we are reaching more Muslim immigrants for Christ than they are reaching Americans with Islam.

We need to get our own house into some semblance of order before we even consider mass immigration to be a logical step in the Great Commission.

When we start to effectively reach even a fraction of the people that already live in this country, when we run out of people to evangelize, maybe that would be something to talk about.

This article from Christianity Today is pure nonsense. It creates straw-men, starting with a click-bait headline, and goes downhill, completely ignoring facts and reason in favor of clumsy appeals to guilt and emotion. We need to have serious conversations about reaching the lost and issues like the church's response to the immigration crisis but this is not even close to being serious. Unfortunately it is kind of what I have come to expect from Christianity Today.
Posted by Arthur Sido at 12:11 PM