How The Media Manipulates Us

My wife and I went to Wendy's for a quiet dinner last night and our local restaurant always has two TVs on, muted with captions, one in each back corner. One has CNN, one has Fox. We were there a while, well over an hour, and the entire time we were there whenever I looked at Fox they were covering the ongoing terror attack situation in Spain. Meanwhile CNN was at least 80%, probably more, talking about Trump. The "failure" to denounce White nationalists, the disbanding of the random Presidential councils no one had heard of before, more about Denounce-Gate, a quick update on Barcelona, and then back to Denounce-Gate. Anderson Cooper had Cornell West and some other guy on and they rambled on and on with a non-stop stream of meaningless platitudes including denouncing "White supremacy" and "male supremacy", which I thought was rich coming from Cornell West since he has become no doubt terribly wealthy (for a "democratic socialist", sort of like fellow "socialist" Bernie Sanders and other "liberal" rich folk like Michael Moore) by attending and then teaching at schools like Princeton, Harvard and Yale, all universities founded by White men and funded and endowed by what I am guessing are overwhelmingly White men. It must be nice to be able to scold and hector the very people that have made you wealthy. Meanwhile Fox is covering an actual news event where 14 people are dead as of now, over 100 are injured and the driver is still at large. A second attack was apparently thwarted. For all of their faults, Fox was carrying news last night at prime time because something real was going on. CNN spent almost the entire same time period taking shots at President Trump.

Meanwhile CNN's Wolf Blitzer suggested that the Barcelona attacks were possibly copycats. Not copying the half dozen vehicle attacks by Islamic terrorists in Europe in 2017 alone. Nope, the Barcelona attackers had no idea what to do until Charlottesville.


CNN Chief National Security Correspondent Jim Scuitto said, “[I]n light of the uproar over the last several days, five days apart, you have white supremacists in Charlottesville use a vehicle to kill, and here you have — attackers at least following the modus operandi of terrorists using vehicles, apparently to kill as well. And it’s that — those shared tactics that should be alarming.”

Blitzer added, “Yeah, and there will be questions about copycats. There will be questions if what happened in Barcelona, was at all, at all, a copycat version of what happened in Charlottesville, Virginia. Even though they may be different characters, different political ambitions, they used the same killing device, a vehicle going at high speed into a group, a large group of pedestrians.”

Wolfie isn't alone in trying to somehow, no matter how obviously nonsensical it is, to link Charlottesville with Barcelona. A guy named Ian Bremmer, a professors at NYU, tweeted out the list of vehicle attacks in Europe this year.

It is almost like Sciutto was searching Twitter for someone to point out the multiple vehicle terror attacks in 2017 so he could try to lump Charlottesville in with Islamic terrorism.

Thankfully people are calling him out about it but you might notice that the original post talked about vehicle terror attacks in Europe. That doesn't stop Sciutto from trying to find a link. As of now we don't know what happened or why in Charlottesville. Did he go there with the intent to drive into a crowd? Did he decide to do so after the antifa violence during the rally? Was his car being attacked and he panicked? We don't know and for two of the three possibilities above I support sending him to jail or the chair as allowed by law. But that didn't and isn't stopping the media from assuming his motives. Here is how this works:

- A half dozen terrorist attacks using vehicle in 2017, many stabbings and a few bombings killing hundreds combined. All of them conducted by Muslims, many accompanied by either claims of responsibility from ISIS and/or shouts of "Allahu Akbar" during the attack.

Media Response: #notallmuslims We must not make assumptions. Calls attacks anything but Islamic terror. Worriedly clutches pearls over possible backlash against Muslims. The true motivations of the attackers might never be known.

- One White guy acting alone with a known mental illness drives into a crowd and kills someone.

Same Media, Different Response: Immediately understands his motivations completely before a single fact is known. All Whites share culpability here, White nationalists are all violent, we must suppress their speech and de-platform them on social media. Trump is guilty of not denouncing White nationalism strongly enough. Tear down every monument.

I employed a lot of hyperbole there but that was intentional as there is no lack of over the top hyperbole all over the place. My point is that much of the media, and especially CNN, are spinning the news to an extent that would make Damon Killian from The Running Man stand up and applaud. 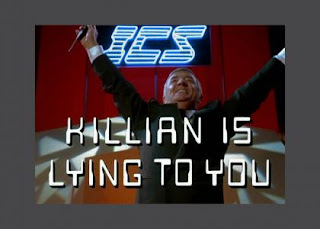 Even Wikipedia and social media platforms get in on the act, from the "Top News" and "Trending" on Facebook to how material is portrayed on their website. This is what appeared on the landing page of Wikipedia this morning:

Notice that the top story is of the Barcelona attacks but the picture is of the Charlottesville incident, a story that is almost a week old but is still featured prominently on their landing page even though far more people were killed last night in Barcelona and in the mudslides in Sierra Leone and the bombing in Pakistan. The story of Charlottesville is at the bottom of the list but apparently Wikipedia couldn't get a picture from Barcelona or one of the other featured news events by doing something complex like a Google search. Or perhaps the intent was to strengthen the perceived link between two completely unrelated events. I wonder....

It is so critical in this day and age to be as independently informed as you can be. The subtle manipulation of news by omission and emphasis has been replaced entirely by overt partisanship on both sides but on the mainstream Left there is still is false aura of neutrality and objectivity. The idea of impartiality and journalistic ethics is a myth. It probably always has been and it certainly has been for my entire life but it is especially true now. Don't let them manipulate you but also don't just tune-out. A disengaged citizen is just as useful as one that has been manipulated.

There is nothing more dangerous to would-be tyrants than an informed population. Don't let anyone disarm you.
Posted by Arthur Sido at 12:02 PM