More Media Manipulation: The Mysterious Case Of The Vanishing Headline

Yesterday CNN ran a piece on their webpage which made an absolutely Orwellian statement that the "Antifa" seek "Peace Through Violence" (screen-shots grabbed this morning by me). 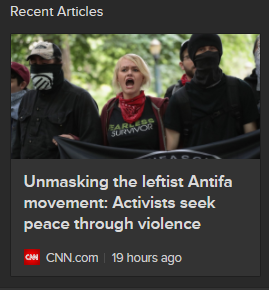 If that doesn't invoke Orwell's 1984, you aren't paying attention:


War Is Peace
Freedom Is Slavery
Ignorance Is Strength

I have to give CNN some credit, that is an unusually honest headline from them. While the various White nationalist groups can muster maybe 1000 people for a well-planned and publicized rally, the far left "antifa" can round up tens of thousands of people at the drop of a hat to protest free speech in Boston. But lo and behold, when you click on the link you get a slightly different headline (many people took screenshots of the original story including "peace through violence") 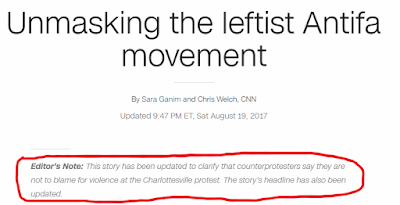 Well isn't that handy! I like that they use the euphemism "updated" in regards to the headline. Anyway. It is a sure sign of hard-hitting journalism when you allow the group you are doing an alleged expose on ("Unmasking"!) to edit your story for content and apparently veto the headline of the story itself. I wonder if CNN asked anyone from the alt-right to edit stories that they run on them? Maybe I am just cynical but I kind of doubt it. Can you imagine the "updated" headline from December 8, 1941 if CNN had been around:

It is important to realize that CNN is not a "news" organization and what they do is not journalism. They are an partisan advocacy organization just like Breitbart, the Daily Caller and Fox News. If you understand that and choose to read/watch CNN and others like them (MSNBC, The NY Times, Washington/Amazon Post, etc.), that is fine but I see an awful lot of people taking what they write and say as Gospel truth because they are "journalists" and of course don't have any ulterior or partisan political motivations. Think for yourself and don't rely on a small circle of "news" organizations to tell you what to think.

We have never lived in a time when more information is as readily available as it is now. We have also never lived in a time with quite this level of overt media manipulation. Now more than ever you need to take charge of being informed and that requires you to be an active seeker, not a passive consumer of information. The days we live in are too perilous to be ignorant.
Posted by Arthur Sido at 8:29 AM