Some Thoughts On The Nashville Statement 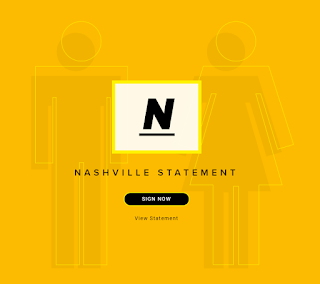 The Council on Biblical Manhood and Womanhood, now apparently known as CBMW: A Coalition For Biblical Sexuality, released the results of a council in Nashville titled, somewhat unoriginally, The Nashville Statement. The work of CBMW is something I have supported for a long time, their old logo and a link to their webpage has been incorporated in my blog for many years. I prefer the specificity of the old name but I understand where they are going with this. The statement is signed by a Who's Who of conservative evangelicals, mainly drawn from the ranks of the Reformed. The names include people like John Piper, J.I. Packer, Al Mohler, Wayne Grudem, Al Mohler and the whole T4G crew, R.C. Sproul, etc. as well as people like James Dobson, Francis Chan, Johnny Hunt and Russell Moore.

On to the statement. From the preamble:


We are persuaded that faithfulness in our generation means declaring once again the true story of the world and of our place in it—particularly as male and female. Christian Scripture teaches that there is but one God who alone is Creator and Lord of all. To him alone, every person owes glad-hearted thanksgiving, heart-felt praise, and total allegiance. This is the path not only of glorifying God, but of knowing ourselves. To forget our Creator is to forget who we are, for he made us for himself. And we cannot know ourselves truly without truly knowing him who made us. We did not make ourselves. We are not our own. Our true identity, as male and female persons, is given by God. It is not only foolish, but hopeless, to try to make ourselves what God did not create us to be.

That is a perfectly valid and true statement. At the heart of both the homosexual and "transgender" movements is the simple statement "Did God really say?" that echoes the words of the Enemy to Eve in the Garden. It is not coincidental that in every case of heresy, the underlying issue is always doubting God's Word. The great issue of the day is the perversion of human sexuality in ways that would have been unthinkable a decade ago. Who in the early 2000's with the exception of some extreme radicals would have thought that college sports conferences would boycott entire states over the issue of not letting men use women's restroom and locker facilities? But here we are. To my everlasting sadness, many people who profess Christ as Lord also deny His teaching on human sexuality, a contradiction that can never be resolved.

The statement itself is pretty standard stuff, 14 affirmations and denials. It is not nor is it intended to be an exhaustive theological treatise. It is a simple listing of what Bible believing Christians ought to affirm the Bible teaches about sexuality and what the Bible denies about sexuality. I am not going to go through all of them, they are common Bible sense statements. I did want to point out one of the articles though, number 10 which is already proving to be the most controversial. Here is a screenshot because I couldn't copy and paste it and I am too lazy to write it out.

That is also pretty straightforward. Sin is sin and approving of sin is also sin. That is just straight Romans 1 stuff, emphasis mine.


They were filled with all manner of unrighteousness, evil, covetousness, malice. They are full of envy, murder, strife, deceit, maliciousness. They are gossips, slanderers, haters of God, insolent, haughty, boastful, inventors of evil, disobedient to parents, foolish, faithless, heartless, ruthless. Though they know God's righteous decree that those who practice such things deserve to die, they not only do them but give approval to those who practice them. (Romans 1:29-32)

Approving of sin is condemned just as sinning itself. Proclaiming your approval of what God declares is sinful and deserving of death is to rebel against God, getting back to that same question "Did God really say?".

My view of the Nashville Statement is that it is an unfortunate necessity, a statement of common sense and basic Biblical doctrine that sadly needs to be reaffirmed today especially since so many "Christians" seem determined to virtue signal by approving of the grossest of sins.

It is pretty obvious that some left-wing groups encouraged people that just as obviously haven't read the statement to go the Facebook page of CBMW and leave silly, vacuous comments. I left a comment that suggested that people had not read the statement and was responded to by a Gunnar Sherrill (on a public post) who accused me of advocating theocracy. I was not biting. 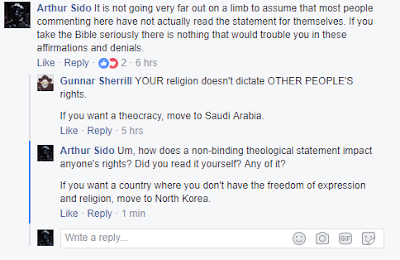 Mr. Sherrill's comment is what passes for civil and thoughtful discourse among Americans today. As an aside he posted comments on a number of posts including the obligatory accusations of CBMW being Nazis and/or the KKK. Many comments seem to come from people who either object to the interpretative conclusions of the authors of the Nashville statement without any actual attempt to interact with the statement from Scripture or, as I suspect is the case, what they really object to is people having a position on human sexuality that uses the Bible as their authoritative source rather than the current culture. In other words, they don't so much object to the opinion itself as they do object to having an opinion in the first place.

At the risk of sounding partisan, you have to realize that the same people "punching Nazis" in the streets will be happy to "punch patriarchs" in the streets or perhaps even in churches. Placating and compromising with these people or virtue signaling in the hope that they will persecute you last is not going to work and worse it is dishonoring to God and cowardly.

Bottom line for me, if you can't agree in principle with the essence of what is written here, I have to question if you have even a cursory understanding of the Scriptures in general and what they have to say uniformly about human sexuality in particular. Denny Burk in a follow-up post wrote:


Anyone who persistently rejects God’s revelation about sexual holiness and virtue is rejecting Christianity altogether, even if they claim otherwise.

I agree wholeheartedly. Sexual morality is not the Gospel but you cannot understand the Gospel apart from an understanding of the seriousness of sin and the Scriptures are crystal clear that sexual sin is an area of critical emphasis when it comes to human depravity and rebellion against God.

I unapologetically endorse the Nashville Statement. There is nothing I find in substantive error in the statement. I am no one but a simple blogger but I believe the entire church needs to stand up for the Biblical design for human sexuality that stands counter to all forms of sexual immorality: adultery, divorce, homosexuality, pedophilia, gender dysphoria, incest, etc. While some of those sins carry more weight culturally and are more grevious Scripturally because of the harm they cause to others, they all are violations of God's created order and all are sins that must be repented of.

The Nashville Statement is a statement that shouldn't be necessary but it is also a statement that absolutely is necessary. If the church cannot stand courageously and without apology for something as clearly taught in Scripture as human sexuality, there is little hope for the church to be faithful in any areas.

I have signed the statement, nobody that I am, and I encourage you to first read the statement in its entirety, ponder it and if you are in agreement add your own name to the statement.