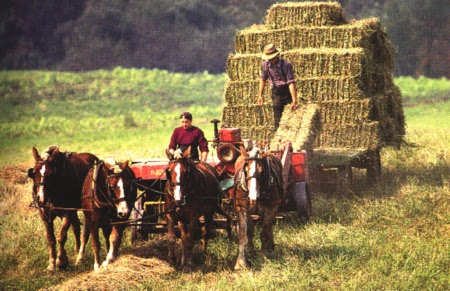 Driving around yesterday where we live almost anywhere you went you could smell freshly mowed and raked hay fields. That is such a wonderful smell. With thousands of Amish in close proximity to our home, everywhere you looked there were farmers, Amish and English alike, cutting, raking and baling hay for the winter. Watching the English with their high tech equipment and then watching the Amish with the plodding but mighty draft horses is such a contrast but when you look at their houses it looks like the Amish are prospering more with less technology. What is especially awesome is when you are out of the car and can not only watch but listen. All you hear are the sounds of the horses doing what they love, leaning into the harness and pulling hay rakes and hay wagons. The soft jingle of their harness out in the open air while they do what man and beast have worked symbiotically together for centuries to accomplish in the never-ending change of the seasons reminds me that bigger and louder is not necessarily better. Farming the way the Amish do seems almost quaint but I don't think many of the Amish envy their English neighbors and the environmentally controlled cabs of their massive tractors with a commensurately massive loan payments.

How different the times and seasons are when you spend a lot of your summer preparing for fall and winter rather than looking ahead to the next vacation or the start of the Christmas shopping season. The rhythms of the seasons in the Midwest are very meaningful for those of us who grew up here and choose to live here and it always brings back memories. For me the smell of freshly mowed hay means more than feed for our livestock this winter, it takes me back to my younger days when I was an insufferable kid dating the woman who would be my wife.

Part of the process of courting my wife included helping with the hay when her dad cut it back when his health was better. That was not much fun because the bales were bound with wire making it possible to make them much heavier than hay bales bound with twine. Some of the bales weighed more than half of what I did back then. Plus I didn't really know what I was doing which made me feel awkward, something I hate. To top it off my wife's brother would toss bales like he was playing corn-hole, which is made easier by him being a giant who was immensely strong. I was pretty strong for a 125 pound kid but each bale was a major effort. Lifting weights in the gym is not quite the same as using your whole body to manhandle a bale of hay.

When I was living in those days of sweating, sore backs and arms that looked like a herd of cats had used them for a scratching post it wasn't much fun but looking back it was all well worth the effort and irritation. I am not sure her dad ever thought I would amount to much but I have to believe it earned me some grudging respect to go toe to toe with the hay bales. 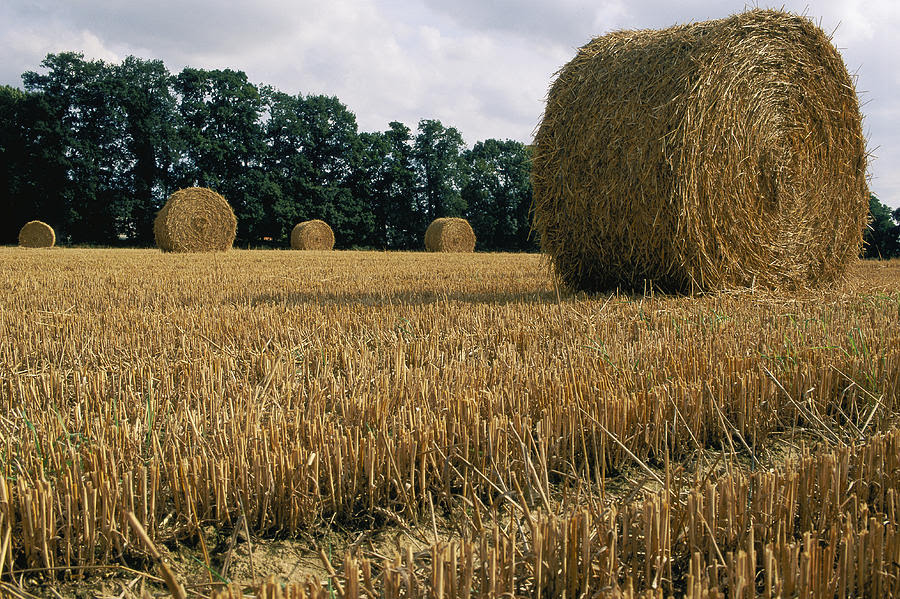 Those days seem so long ago but I still remember the smell of hay and it reminds me of my wife. She would be out there with the men, working every bit as hard but smiling all the while. Hard work never bothered her and I tell skeptical Amish guys all the time that back in the day she could work every bit as hard as an Amish woman or even an Amish man. Stacking hay bales in the barn seems an odd thing to remind me of her but I recall those days and the smell of hay reminds me of how blessed I am to have a faithful wife of more than twenty years and eight children that we love. Our oldest son is out of the house every morning before 7 AM to go work on Amish farm and I see in him so much of what I respect about my wife. My other sons will head out later to care for our pigs, horses and cattle. My daughters are bright and beautiful and the two older girls spent part of their summer in Nicaragua and Nepal serving Christ.

My ungrateful and vain younger self would be shocked and disappointed at how we choose to live but I look around at my family and especially my wife when I see hay being made and wouldn't trade it for anything in the world.
Posted by Arthur Sido at 7:50 AM

We may complain some, but we all love working with square bales. And, as much as I'd love to watch someone else do this work with horses or mules, I'll stick with our antique John Deere (no cab). We all love the smell of cut grass, the hard work itself, and the gratification of a job well done! I wouldn't change these hot hay days for anything.