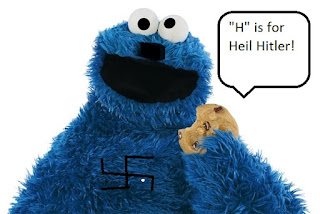 I know Cookie Monster is blue, just humor me.

Pretty much every day the forces of American liberalism descend deeper and deeper into hilarious yet unintentional self-parody. The only proper response to their foolishness is to point it out and mock it mercilessly.  You may think that is unloving but the least loving thing I could do is let this malarkey spew forth on the internet unchecked. Let me introduce the latest risible parody combining a keen sense of cluelessness with a bushel basket of liberal slogans. It concerns the news that HBO is funding and broadcasting beloved children's show Sesame Street and in doing so is helping "The Man" to keep poor kids down:


In short, Sesame Street was founded to help low-income kids keep up with their more affluent peers. That is literally why it exists. It succeeded beyond anyone’s expectations. And now it is becoming the property of a premium cable network, so that a program launched to help poor kids keep up with rich kids is now being paywalled so that rich kids can watch it before poor kids can.

That in itself is not a tragedy or an injustice. Tragedy is the devastating funding cuts that Head Start has suffered in recent years, affecting tens of thousands of young children. Injustice is the nationwide lack of subsidized high-quality child care and universal pre-K. In this context, relocating Sesame Street to the gated community of HBO—even if that community's gates swing wide at nine-month intervals—is only to be expected. There could be no more cruelly perfect metaphor for the ultra-efficient sorting processes of socioeconomic privilege.

Really, you can't make this stuff up.

Before you ask, no that is not intended as satire and it is not on the webpage of The Onion. It appears on the electronic pages of Salon, which is inferior to a stopped clock because at least a stopped clock is correct twice a day whereas Salon is pretty much never correct. About anything. The article is titled Why Sesame Street’s Move to HBO Is Both Great and Extremely Depressing and is written by someone named Jessica Winter.

What is so ridiculous about it (well the whole article is ridiculous but this is especially ridiculous) is that she even admits that Sesame Street is suffering declining revenues and that 2/3 of viewers don't even watch Sesame Street on PBS, using streaming services:


What’s more, PBS only accounts for about one-third of Sesame Street’s viewership—most kids stream the show and would be unaffected by HBO’s involvement, which would bring in enough money to produce twice as many new episodes per season and spin off new programming.

So this private sector partnership with HBO is basically saving the show and not only that but is going to increase the content by doubling the episodes and new programming. So what is her problem? It is the unspeakable injustice that "rich kids" will be able to watch episodes 9 WHOLE FREAKING MONTHS BEFORE "POOR KIDS"!!!!! Oh, and HBO might make some money on the deal and of course that is bad although I am pretty sure no one is going to subscribe to HBO just so they can get Sesame Street.

First off, I doubt there is much evidence to support the notion that "poor kids" don't have HBO. We are a middle-class family more or less and we have never had HBO. My parents who are a well off retired couple don't have HBO. I am quite certain that a lot of "poor" people have cable and many of them probably have HBO. Second, it seems like a great trade-off for HBO to have exclusive rights for 9 months before the episodes go public. HBO doesn't release Game of Thrones episodes to the public after 9 months, they don't release them at all (although pirate sites certainly do). This is a win-win in all respects. According to Wikipedia, Sesame Street has gone on for 45 seasons with 4,386 episodes that are available on DVD at the library for free and probably a bunch of free streaming services. If "poor kids" can watch that many episodes before the 9 months are up, they are spending too much time watch TV. Of course parents might have to put down their smart phones for a second and swing by the library or relinquish their phone so their kids can watch a couple of episodes. Heavens to Betsy, they might even want to crack open a book and read to their kids in the couple of waking moments a day kids are not incarcerated cared for in day care or school

So what is Ms. Winter's problem? That is probably a pretty complex question but in this case it seems what her problem is that PBS is getting into bed with one of those fascist, evil for-profit companies! Viva le revolution and all that! Of course PBS has been raking in the dough (see what I did there?) via DVD sales, toys, etc, in their licensing empire. That is all private sector and darn it, it is not fair that "poor kids" can't afford a stuffed Mr. Snuffleupagus! A chicken in every pot and a Big Bird lunch box in every school locker! It just seems to be rubbing Ms. Winter wrong that this is a great deal but it doesn't involve Uncle Sam. Based on her screed it looks like this is just an excuse to bang the drum for the usual, tired litany of leftist causes: universal Pre-k (womb to college hand-holding for everyone!), subsidized day care (because why should a mom be at home taking care of her kids instead of some government lackey?) and of course Head Start, a program that is a failure on every level but is still stubbornly advocated for by liberals because they can't admit a program doesn't work, it only needs more money. When I read "the gated community of HBO" I can't help but snicker. I will say it again, even with a pretty vivid imagination I couldn't make up stuff about the left that they are not already contemplating.

The message from Ms. Winter is arrogant and condescending: Poor people (i.e. minorities) are too lazy and stupid and simply cannot be trusted to read to their kids or get a DVD from the library so the government needs to appear in the benevolent form of Cookie Monster and Big Bird. It is the same racist, paternalistic, pat the dark hued people on the head, sort of insulting attitude that accompanies most big government programs. If you are not college educated and working for a government department, you certainly are not smart enough or qualified in any respect to do anything for yourself. The programs Ms. Winter pines for, Head Start, universal pre-k, government subsidized day care so women can go to work and pay taxes which are them used...to pay for day care, all assume that the least trustworthy people to raise kids are the very parents of those children. When you expect little from people and incentivize them to not care for their own kids and shout that they are unqualified to raise their kids, it is little wonder that the end up doing exactly that. People will usually live up to or live down to the expectation of others. With all of these programs designed to keep kids away from their parents, we can't be too far from proposals that the government seize minority kids and kids from homes under a certain income level at the hospital, whisking them off to a government holding pen, er, school, within hours of birth and keep them there until they graduate from college and can repeat the cycle.

C is for cookie indeed. It is also for crazy.
Posted by Arthur Sido at 5:03 PM

Email ThisBlogThis!Share to TwitterShare to FacebookShare to Pinterest
Labels: liberalism