That is not what the word participate means 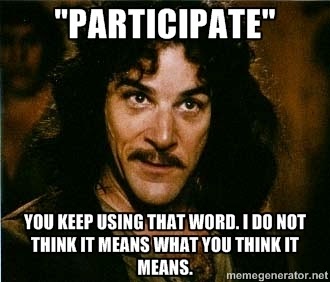 I like to watch trends in social media to see what people are talking about. For example, some relatively recent trends have focused on the need for "membership" as a response to the mass exodus of religious attenders and also the backlash against the "radical" movement that purports to call religious folks out of their general apathetic position by extolling the virtues of just being run of the mill church attenders.

I have started to see appeals from church status quo defenders on the idea of participating. Now when they talk about "participation" it is not what you might expect. We aren't talking about meaningful, 1 Corinthians 14:26 sense. No, we are talking about "participation by being passive". For example, Tim Challies linked to an article by Joe Thorn, Making the Most of Sunday. Right out of the gate we have on display the Sunday-service-centric view where all week is apparently nothing but time to prep for Sunday morning and make some dough so you can drop a check in the plate. Joe breaks down how a good churchgoer can maximize their religious experience on Sunday by preparing, participating and reflecting. It boils down to "Get ready for a sermon, listen to the sermon, think about the sermon afterward". What is really exposed is the emphasis on "participation" while maintaining control and the focus on the clergy. For Joe "participation" means: showing up early so you are ready, listen eagerly and attentively to the sermon, sing the songs you are instructed to sing when you are told to and do so enthusiastically, pray along when the pastor is praying, be sure to focus on God while actually focusing on the various scheduled events occurring in the church and then leave.

What is notable about this list of how to participate is that you really aren't participating at all. While you might be considered to be "participating" in some of what Joe lists if done occasionally, if that is all you do when the church gathers you are being passive, not participatory, and those two are really mutually exclusive. I don't think that a gathering being participatory is the only factor or a cure-all for what ails the church. Participating in bad theology is just as bad as being passive, or perhaps even worse. But if we are going to make noise about participating and then describe something that is the complete opposite, something is wrong.

We don't know exactly what the meetings looked like in the early church. I don't even like calling them meetings because it sounds so formal, like something on my Outlook calendar. I prefer gatherings but regardless I believe that the Scriptures are intentionally vague on this point, giving us guiding principles without providing legalism-prone lists of "dos" and "don'ts". We do see some important principles and hints and one thing that they point to is that the brethren were tangibly involved when the church gathered. To summarize it was "one anothering", not "one and all the others". Participatory church can become an idol like anything else and it can also become a shtick to make money and gather influence for yourself but those potential errors shouldn't dissuade us from seeking ways to give the brethren the opportunity to make meaningful contributions to edifying and encouraging one another when the church is gathered. I don't think we have to do away with monologue teaching but I do think we need to a) place less emphasis on it and b) create ways for the church to engage in the teaching by allowing and encouraging many brothers to teach and the entire church to interact with what is being taught. A passive, spectator church is fertile ground for errors and cultists. To show that we really care about orthodoxy we need to encourage more of the brethren to teach and engage the Scriptures in the hermeneutical community.

If we are going to talk about participation, and we should, we ought to actually discuss ways for the church to participate, not just be more enthusiastic about being passive.
Posted by Arthur Sido at 3:00 PM

So good I couldn't possibly add another word!