Book Review: Of Dice And Men 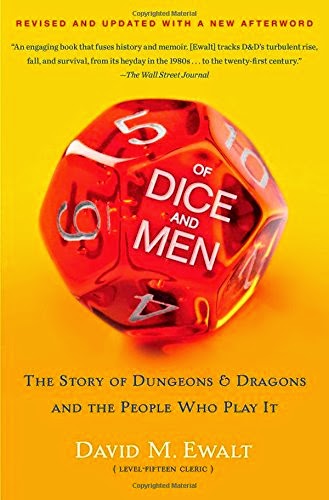 For those who know me mostly by my online scribbling it might come as a surprise (or perhaps not) that I do more than rant about theological lib'rals and the institutional church. I read books about stuff other than the Anabaptists and ecclesiology. In fact I read a ton of fiction works, almost exclusively fantasy and science fiction. This goes way back to my childhood and even though I have had times when my love of adventure and fantasy was set aside, I still retained both my passion for them and also the historic artifacts that were the focus of my younger days. If you doubt that, stop over some time and I can show you my pretty complete set of first edition Advanced Dungeons & Dragons rule books, modules, early edition Dragon magazines and a vast collection of fantasy and science fiction novels from the 70's and 80's. Keep in mind that I didn't move out of my parent's house and into my current home in Indiana. My wife and I have moved over and over again, from Ohio to Wyoming to New Hampshire back to Michigan with a number of other states in-between (my 8 children were born in 5 different states and only the last two were born at the same hospital consecutively). Throughout all of these moves it would have been easy to ditch this stuff but my loving helpmeet never let me. In a time of multiple thorns in the flesh I have found myself once more delving into this world that formed who I am as a person and provided my main outlet for creative thought long before blogs. Into this time of crisis I came across a book that delighted me like few have recently, David Ewalt's Of Dice and Men: The Story of Dungeons & Dragons and the People Who Play It.

At this point let me stop and offer a bit of friendly advice. If you are someone who is still caught up in the hysteria of the 80's that painted Dungeons & Dragons as a satanic plot that led to kids murdering their families and killing themselves, please stop reading and go elsewhere. If you are fixin' to wag your finger at me for such a worldly waste of time, same thing. Take your SEC football jersey and foam finger and hit the road.

Still here? OK, on with the review!

Of Dice and Men, ODM from here out, is not a deep read. It isn't going to give earth-shattering insight to people who have played D&D for any length of time. It is a pretty lightweight introduction for those unfamiliar with Role Playing Games. It still was so much fun to read. I also learned quite a lot about the history of this game. I was born in 1971 and started with D&D when I was in middle school if I recall correctly but I was into fantasy and sci-fi long before that. I was an early reader and read books like the Lord of the Rings when other kids were struggling with Dick and Jane books. As with most of my family I was always with my nose in a book: in the car, at the dinner table, before bed, on vacation. I would go to northern Michigan on the shores of a beautiful lake and sit inside and read. Those books were almost always a fantasy or sci-fi novel. When I started getting into D&D it opened a new world for me. No longer was I restricted to the world created for me by the author, as amazing as the world of Tolkien and others might be. I could create my own world and boy did I ever. I actually rarely played the game with others, for me the joy came in creation even if no one else ever saw it. As I grew older, D&D got to be a social liability and it was boxed away but those books were always there. Even as someone who is by most accounts an ultra-conservative fundamentalist, I love the world and adventure creating that goes on in role playing games, whether D&D or a MMORPG (Massively Multiplayer Online Role-Playing Game) like Eve Online (I am too awesome to play World of Warcraft) where I play as a character with a name derived from my favorite childhood elven character in D&D.

This is a similar story to David Ewalt, the author of ODM who is also a journalist writing for Forbes. He was a D&D guy back in the heyday like me, although a little younger, who moved away from the game but also kept a lot of his old stuff. ODM is his story of rediscovery as much as it is a history of D&D but I still learned a lot. As a middle-schooler I didn't see the  turmoil that rocked the founders of D&D and TSR, Inc. I just loved new stuff coming out. ODM helped fill in the blanks for me. It also served to give me a crash course on what has happened since I stepped away from the game although a lot of the details of the ill-fated editions is left out. I mostly enjoyed his own personal journey back into the game. Like David I have a spouse who is pretty much supportive of my weird habit and that has made a ton of difference in my life (in a lot of ways not related to gaming as well).

ODM provides a look at what happens when a game played in the basement becomes a world-wide phenomena and the subsequent squabbles over money and control that would ultimately lead to founder Gary Gygax losing control of his own creation. The game has gone through a lot of struggles but with the latest iteration described in ODM it might be posed for a comeback.

I don't know if many (any) people who frequent my blog would find this book interesting. I kind of suspect more might than you would think. If you share some secret, closeted geek street cred give this book a shot. There is some colorful language but the story is a fun one and well told. Who knows, you might want to try your hand at being a half-orc or gnome with some local nerds!
Posted by Arthur Sido at 1:00 PM

I could never be a half-orc or gnome because my charisma is too high.

I read _Of Dice & Men_ last year. It was good. I lived near Lake Geneva back in the TSR days and had a chance run-in with Gygax at a Subway in town. Didn't realize who he was until we traded business cards.

Back in D&D's early days, I used to DM for other teens in my neighborhood. We were waaaaay ahead of the adoption curve, as I had Greyhawk campaigns. Mostly, though, I built my own scenarios. We had great times. Also played Gamma World.

However, when I went to college, my university did not have "nice" D&D players. Lots of drug users and guys who liked to abuse female NPCs. I was so disillusioned with these folks that I quit playing for almost 30 years. Only in the last four years have my son and I taken up Pathfinder, which took over the RPG crown while D&D was off being stupid with 4e.

Now 5e is hot, but I only have time for one RPG, so we're sticking with Pathfinder. Been playing the Rise of the Runelords campaign for almost 18 months now. Have a great GM. Would love to lead a few self-created scenarios (esp. one built around 1970-80s era text adventure games).

BTW, have you ever read _Ready Player One_?

Dan, I remember Gamma World! I might even still have my materials....

I haven't read that but I will check it out. I have heard of Pathfinder but don't know much about it.

We have ready player one at our library but every copy is checked out!