An Unusually Honest Statement Plus Some Bonus Eisegesis!

Kevin DeYoung, designated champion of all things institutional, wrote what might have been a decent post on the need for constant study of the Scriptures but instead turned into a not-veiled-at-all admonition to "go to church" and keep your mouth shut when your betters are speaking. The keeping your mouth shut part is not me engaging in hyperbole, he actually says that. From Pay Much Closer Attention (emphasis mine).


This is one of five warning passages in Hebrews. These five passages are not teaching that genuine Christians can lose their salvation. What they are teaching is that some people with an external connection to Christianity will not in the end by saved. And further, these passages suggest that those who are saved at the end, will be saved by means of these warning. These passages are danger signs that keep the elect persevering to the end.

“We must pay much closer attention to what we have heard”-that’s the warning. Sit up straight. Put your feet on the floor. Shut your yap. And listen up. “Pay attention church people! You are in danger of drifting away.” Hebrews 6:19 says the promise of God is “a sure and steadfast anchor of the soul.” So we’ve got warnings to the drifters and promises to those who are anchored.

Sit up straight. Shut your yap. Listen to the sermon, take notes if you are especially pious.

OK that is something I have been saying for a while, describing "church" as mostly a "show up, shut up and pay up" event. I say it as a condemnation of the institutional church system but apparently Kevin, amid his attempt at levity, thinks that it is a good thing. Really though is that what the writer of Hebrews is saying? Pay attention "at church"? Listen when the preacher is speaking and shut your mouth? If you don't listen to the sermon you will drift away from the faith?! It seems to me that there are plenty of people drifting away who do show up, who do shut up and who do pay attention to the sermon. The arrogance on display here amid faux humility is pretty incredible. What Kevin seems to be saying is that when he is speaking, something so important is happening that you had best shut your yap because the difference between staying in the faith and drifting away is how quietly and attentively you listen to him or other pastors (the right kind of pastor of course).

Now for the bonus eisegesis later on in the post (again, emphasis mine):


That’s the way it happens for many people. They never dropped anchor, and so they simply floated away when the currents got strong. They used to pray. They used to be interested in the Bible. They used to talk to God. They used go to church. They never woke up and decided “Today I’m going to stop being a Christian. They just drifted. That’s why Hebrews 10:24 says “Let us consider how to stir up one another to love and good works, not neglecting to meet together, as is the habit of some, but encouraging one another, and all the more as you see the day approaching.” Some of the Hebrews had checked out, stopped going to church, just floated away from the whole thing.

I guess since almost no one calls people out on the "Hebrews 10:24=Going to church on Sunday morning" narrative, we will continue to see people misuse and misapply this verse. Two points that you are probably sick of reading and I am sick of writing but need to be written anyway:

b) There is more to that verse than "not neglecting to meet together". There is a lot about mutual edification and encouragement which is really the point, being actively engaged rather than merely attending. What that means is that even if you faithfully "go to church" whenever the church doors are open but are not actively engaged in encouraging others and stirring them up to good works, you are neglecting the critical point of Hebrews 10:24. Let me say that another way. If you are simply a passive observer of the pageantry on Sunday morning, which describes the vast majority of church-goers in the West, you are at least as guilty of neglecting the fellowship of the saints as someone who stays home. Try laying that truth on your average American clergyman and see what they say. 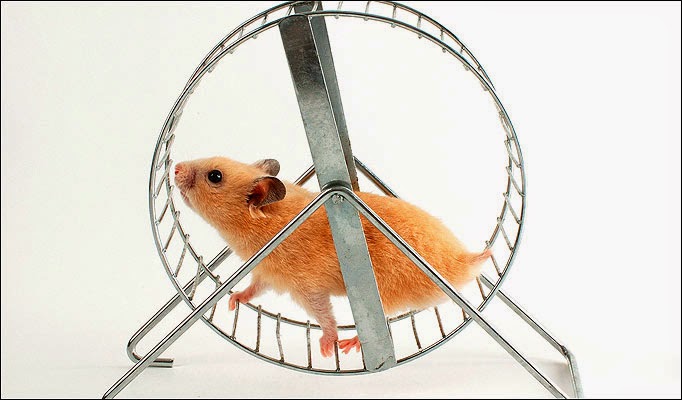 Most of the church keeps running and running on the institutional church hamster wheel and never goes anywhere but our "leaders" tell us that we are the problem because we aren't running in the wheel enough, or fast enough or perhaps we simply are not paying close enough attention. It turns out that you can go a lot faster when you get off the religious hamster wheel and walk on your own than you can by seeing how fast you can make that wheel spin.

If anyone tells you that your faithfulness is based on keeping your mouth shut while he is speaking, feel free to speak over him while saying good-bye.
Posted by Arthur Sido at 9:30 AM

I was just thinking of you-- have you seen this video on a medical perspective of the Crucifixion? Its amazing https://www.youtube.com/watch?v=T-EVfxABSoU

There's a man who's going to get a rude awakening one day!

How is it that "meet together" only passes the sniff test if it happen in a church building? Can't I meet together with a half dozen believers over a lemonade at the local bistro Tuesday evening and have it count?

And an hour or two on Sunday with nothing the rest of the week--the typical American version of church--is a poor example, especially when compared to the Church in other countries.

That is the real question, isn't it? Why is only one narrowly defined expression of gathering considered legitimate when the church meets together so many other ways? I think we know the answer but I will say it anyway: money and power. I should do a follow up blog.