Buy a Camaro for Jesus! 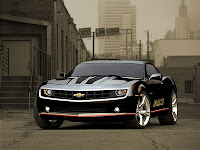 This is just weird but then again not much is as it should be in Detroit these days...

In what organizers said was the first event of its kind in the area, Hartford Memorial Baptist Church in Detroit teamed up Sunday with GM and the GM Minority Dealers Association to offer churchgoers a chance to test drive more than a dozen cars.

As congregants left the northwest side church at 1 p.m., Pastor Charles Adams said the idea of Ride and Drive was to demonstrate GM's commitment to minority causes, its employment of thousands of local African Americans and to encourage churchgoers to buy a new GM car.

"Americans now must support American-made products," Adams said outside the church with Detroit Mayor Dave Bing, a longtime member. "We are encouraging our church members to take care of their community by buying locally. This is an ethical purpose that is beyond profit."

Ummmm. I am not sure what buying a particular brand of car has to do with the Gospel. Especially in Detroit where there are a lot bigger problems than which new car to buy. No worries though, the moneychangers were on hand!

Banks also were on hand to show potential new car owners how to apply for a loan. The church was chosen to host the event because it has a history of activism, said event spokesman Kevin McCormick.

Come to church, covet a new car, go into debt to buy it! I am sure that is in the book of Acts somewhere....

Sort of related...did you see the special on Detroit that was on the other night? I think it was on Dateline. It was heartbreaking, to see a kind of poverty that I have never had to face. But at the same time, it was really awesome that many of the people they showcased were praying, and praising and thanking the Lord, in the midst of hopelessness. I would really like to get involved in some of the food ministries they showcased.

I didn't see it. There are a ton of great people in Detroit. unfortunately it seems that the leaders in Detroit are not doing much to help, whether politicians or clergy. A lot of the Detroit clergy are waaaaay too cozy with the politicians in town and they are all looking out for number 1 (who is NOT Jesus Christ)