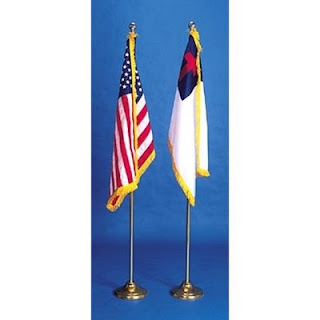 America is a wonderful country, the freest nation in the world. We have a level of wealth that unimaginable around the globe. We can travel freely as we choose and thanks to an incredible interstate highway system, I can drive from mid-Michigan to Charlotte, North Carolina in a day if I choose. Outside of a few Hollywood types who have become insane from the wealth provided by the very country they hate (Sean Penn, I am speaking to you), America is the envy of the world.

However, America is not a "Christian nation".

This notion, so incredibly prevalent in American evangelicalism, is hazardous to the church.

Here is where I think this comes from:

a. X, Y and Z are American values

b. Lots of Americans are Christians (or at least go to church)

This is problematic for a number of reasons, not least because it leads to people misapplying patriotic American values as doctrines of the church. Take the right to self-defense for example. It is a core American value. Someone tries to take your stuff or hurt you or your family, you have every right and indeed every expectation as an American to shoot them. We accept that and then turn it into a Christian value. The problem is that we just don't see that in Scripture and just the opposite is true. It seems to me that the message of the Bible is that as meek and humble followers of Christ, those who have gladly given up their claims on their private property and even our very lives, we would rather be defrauded, stolen from or killed instead of returning evil for evil.

The amount of "Christian" schlock merchants peddle with patriotic images of flags and bald eagles interspersed with crosses and a generous helping of Psalm 33: 12 quotes (heads up, Psalm 33:12 is not talking about America and America has never been a nation who's God is the Lord) is frankly embarrassing. God's elect are found among every tribe and every nation and every people. There are far more believers outside of America than inside of America. There are far more unbelievers in America than believers and that is true for every other nation and has always been true, even in our idealized vision of Calvin's Geneva or the days of the Puritans. An unbeliever in America is infinitely and eternally worse off than a Christian being tortured in a North Korean prison.

We need to stop assuming that material prosperity and the various rights we have as Americans are a sign of God's special favor upon this land and her citizens.

Tomorrow I have on tap a post explaining why it is silly to even think of America as a "Christian nation".