The sinking of the Danny F II 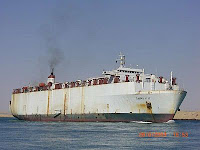 A few days ago I read an article about a ship, the Danny F II, sinking near Tripoli. 11 crew members died (at last count) and also the cargo was lost. The cargo in question was livestock, some 28,000 cattle and sheep traveling from Uruguay to Syria, a trip of over 5000 nautical miles.

So what? Perhaps the least interesting story I have ever linked to? Here is the so what and what came to mind when I read the article.

According to the Bible, Noah's ark was pretty big:

A cubit is about a foot and a half, so the ark was 450 feet long and 75 feet wide. The Danny F II was 665 feet long and 92 feet wide. Keep in mind that the ark had minimal living quarters and no engines or electronics. The Danny F II had a crew of 77 and was built to travel thousands of nautical mile so it carries a ton of fuel along with the crew and livestick. So very similar in size when you consider just the cargo capacity.

Lots of skeptics scoff at the flood account. How would you get all of those animals on one ship. But here is a modern ship made to sail around the world (thousands of nautical miles), not merely floating, and it had a cargo of 28,000 sheep and cattle. When you think about how many different species the ark would have carried, especially how few land animals are really big, is it all that inconceivable that you could carry a pair of each and seven pairs of the clean animals? So next time someone scoffs about the ark, just think of livestock carriers we have today and try to imagine 10,000 sheep and 18,000 cattle on one ship. Doesn't seem that far-fetched at all, does it?