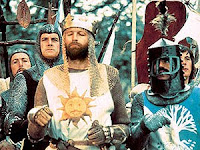 I have a burr in my saddle about something and it led me to thinking about the feudal system. As you probably know, this was one of the primary modes of economics and government in the Middle Ages in Western Europe, a thousand year period between the 5th and 16th century (which coincidentally is about the same time between the rise of Roman Catholicism and the start of the Protestant Reformation). One of the keys was the idea of fiefdoms in a feudal society, where small, quasi-independent local lords ruled over a fiefdom. They had their own castle or stronghold and their assigned peasants. Those peasants, as I understand it, like the lord were loyal in some way to the king of the land but their real loyalty was to the local lord. After all, he was the one they knew and who provided them with protection and to whom they provided service.

Each “local church” in fact if not in theory operates like a fiefdom. There is a king, Jesus Christ, that we pay homage to but our real concern is on our local fiefdom called the “local church”. We recognize other fiefdoms as more or less legitimate, i.e. other local churches, but because they are THAT church and not OUR church, because they have a different worship style or affiliate with a different denomination we stay clear of them. Sure there are people hurting or in need in other areas but our focus is on the people in our fiefdom. Let the lord, er pastor, of that fiefdom, um local church, take care of his own people. We have problems enough of our own to deal with. Thus we become focused on the issues and problems of our own little fiefdom even as we claim to recognize the universality of the church. Essentially we live our lives on our own plot of land and isolate ourselves from the greater Body of Christ.

Even the economic system works in a similar fashion. The “members” of the local church work the land and pay a portion to the pastor. The pastor in return provides them with doctrinal protection and services that they don’t want to do themselves, like visiting the sick and the widows. A feudal lord was granted his position because of lineage and power, a pastor is granted his position by his education and ordination. The medieval lord had a sword, the pastor has his pulpit. Peasants weren’t allowed to have swords lest they rise up against the lord, church members stay clear of the pulpit lest they wonder why they pay someone to do what they could do themselves.

On the other hand, you can go too far the other direction and make the Roman mistake of overemphasizing the link between interconnectedness and centralization of power. Medieval Rome had a virtual monopoly on Christianity and maintained that grip by any means necessary, even if that meant putting malcontents to death. Neither the neo-feudalism of the traditional church or the stifling authoritarianism of Rome represents the Biblical church.

The proper and I believe Biblical road is to see the Body of Christ for what it is, all of the redeemed everywhere and for all time. That means that in truth and not merely theory that the Presbyterian down the road and the Christian in Tanzania are members of the same church as you. They are not relegated to distant relatives because they are in a different “local church”. One of the things that has been hard for me to get used to is that different speakers each week at church. I have to say I am coming to enjoy it. I like that we have guys from other assemblies come and speak to us. It shows an interconnectedness that is missing from the fiefdom church model we are so used to. It is almost unthinkable to have a someone other than the pastor teach. If he leaves for vacation, he arranges "pulpit supply" from outside of the congregation. Why not do as the Bible teaches and disciple men in the local gathering to maturity so that they can also be part of the gathering of the church in a meaningful way? I have my own theory about that.


It is not a good thing when you can see parallels between Monthy Python and the local church. I am just saying.

Arthur,
Just started reading your blog; lots of good posts!
This one I appreciated a lot. Seems to me that this sympton comes mostly from the need of the leadership to maintain their access to money and power. Thus, we see these fiefdoms as you put it... Whether intentional or not, I see this happening over and over again. I once called a church and ask if I could be a part of a bible study they had. I was going to a different church but wanted to connect with other believers in my area too. The guy on the phone got all confused and asked "well will you be with us or with your current group?" If the churches didn't have bills and salaries to pay, and egos to maintain, this sort of question would be moot in my opinion...

I love the correlation you make here between the modern church and a fiefdom. By all means, share with us your views on why churches fail to disciple men adequately. I'd love to read that. And I've always thought it was suspicious, to say the least, when pastors use men outside the congregation to subsitute for them when they are away. The reason this is odd, is bacause I haven't been in but one church in the last several years that hasn't had at least 3 other men in the congregation who had "received the call to preach". One church had 7 men that would stand up when the pastor would ask for all the men of God to stand and be recognized.

Sigh. You'll understand if I say that what I read in your blog is totally different from my former pastor? In my time at my current church, I've only had one pastor who: had no wish to work with other pastors in the area, had his name engraved on the pulpit, and never took a vacation because (I suspect) he didn't want anyone else in the pulpit. (No one else was good/smart/reformed enough.) He also had a tendency to treat his "peasants" as quite inferior to himself. Can you guess which pastor that was?

I think your comparison of local churches to feudal fiefdoms is quite overstated. Yes, you can make the case that there are some similarities, but that doesn't mean that local churches are a feudal system. I can point out lots of similarities between different types of mammals, but that doesn't mean a cat is the same as a dog. Perhaps you are describing how you used to view the church, but it is not at all how I see it. I know full well that Christ's body is not bounded by denominations, location, time, or any other physical or mental factors that tend to separate us here on earth. At the same time, we do have local bodies of believers who support, encourage, and minister to each other. That's okay. That's the model we have in Scripture. It's also what we do with our earthly families. I may have relatives all over the place, but the ones I regularly serve (cook for them, do their laundry, teach, etc.) are the ones in my home. That's okay, too.

Please be careful not to overstate and stereotype.

I neither said nor implied that this was a perfect comparison. My point is, as always, to encourage people to think. I think your analogy of the human family to the church has merit but falls short. The church is not defined by our local gatherings. The church is defined by our common confession and salvation. I don't think I am overstating this issue at all and I freely admit my myriad of failures as a pastor. My failures in no way delegitimize my contention. In fact I would that many of my failings are proof positive of what I am saying. I don't require agreement with what I say, after all this blog is merely my outlet to think out loud.

Many churches get their pulpit supply at Pulpit Max, others at Pulpit Depot. ;)

I didn't say the church is defined by our local congregations - quite the opposite. I said Christ's body is NOT bounded by location, etc. My analogy to a family was just to point out that while I'm related to many people by blood, marriage or adoption (general definition of a family), I'm only truly involved on a daily basis with those who live in my household (immediate family). That's how I see the church. The whole church (fellow heirs with Christ, redeemed by His blood) is His body, but the only part I'm really involved with on a daily basis are the Christians in my local church. Yes, I pray for fellow believers around the world, do what I can to help them, etc., but I've never talked to them, eaten with them, taken communion with them, etc. And I help minister to Christians from other congregations through the food pantry, but still am not all that connected with them. And that's okay. Being more intimately connected with the believers in my local church is not wrong. While I can't use that as an excuse to not help others outside that church, it is not wrong for me to help those I see all the time first. And it's not wrong for people to exercise their gifts to minister to the local body. Indeed, that's what we see happening in the New Testament.

Debbie, I am not at all saying you shouldn't minister locally. You absolutely should and you do. What I am saying is that we become insular because we place the local church organization over the Body of Christ as a whole.

How do we place the whole body of Christ first?