Book Review: What he must be...if he wants to marry my daughter 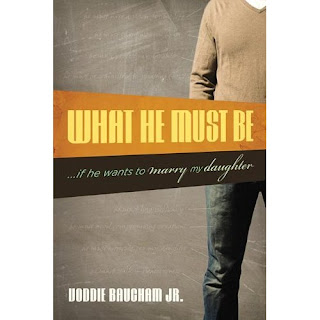 So I just finished reading Voddie Baucham's new book, What he must be...if he wants to marry my daughter.

The world we live in and the way we live in it demands change from Christian parents. Not just tinkering around the edges, but radical, wholesale change to the way we approach parenting. Most, and I say that with full assurance, books on “Christian” parenting are of minimal use, if any, because they see Christian parenting as little different than non-Christian parenting. We raise our kids in the same way, with the same methods and (tragically) with the same expectations, just with a little bit of youth group thrown in. Why then are we surprised when we get the same terrible results?

For example. Think about how much time parents spend on planning for their kids. Planning to have them at a convenient time. Setting up college funds. In some places, getting an as yet unborn child on a waiting list for the premier daycare or preschools. Setting up schedules for the ever increasing number of activities that kids are involved in from piano lessons to sports. Planning intricate and expensive family vacations. Picking a church based on the youth program. Detailed examinations of colleges to make sure that little Susie or Bobbie get in just the right college so that they can get a “good job”. But what about the most important decision they will make? There is nothing that will have a greater impact on the bulk of our children’s lives than who they marry, and yet for so many parents that is not even on the radar, nor is it viewed as something that parents need to be actively involved in. Just raise ‘em the best we can and send ‘em out and hope for the best!

That is the impetus behind Voddie Baucham’s new book “What he must be…if he wants to marry my daughter”. It is high time that the people of God turn to the Word of God to see how to raise the gift of God that we have received in our children. This is not a book, as I am sure it will be caricatured by many, on arranged marriages or domineering patriarchy. It is a book that calls on Christian parents to take an active and intentional role in raising up our kids to seek the right kind of spouse and being deeply engaged in that process. It is also not just about helping our daughters marry godly young men, it is also about helping our sons become the godly men that Christian young women should desire to marry. This is, despite the title, not just a book for parents of young women. I would heartily recommend this book to parents who have just sons, married couples who don’t have kids yet, couples thinking about getting married, single adult women and men, teenaged girls and boys alike. I fully intend to have my girls read this book and then talk about it with them, because I can say with confidence that if they seek out a spouse in the manner and with the characteristics that Voddie lays out, they are far more likely to have a sustainable, happy and Biblical marriage. That is far more important to me than them “marrying well”, which means marrying a doctor or finding “Mr. Right”.

The chapters raise issues that will seem completely foreign to many parents. Our daughters should seek a young man who is committed to children? Huh? They should seek a young man who is a Christian, and not just a “church member” but someone who has a grasp of the Bible, is daily seeking God’s will in His Word, someone who is committed first and foremost to Christ. Have you ever thought about meeting a potential suitor for your daughter and engaging them in a discussion of theology to see if they really are in the Word or just going through the motions? In one of the chapters that will cause people to freak out, we should teach our daughters to seek young men who understand and embrace patriarchal male headship. What!? Yes indeed! When we teach our young women a watered down feminism that sees radical egalitarianism in family life as the “enlightened” model that they should seek, is it any wonder that they marry poorly and have families that are not run in a Biblical manner?

One thing that is clear in reading this book: it is unlike most of the books on marriage, parenting, courtship, families, etc. that you will find filling the bookshelves of “Christian” bookstores. Having perused a few of those books, and having seen first hand the effect those books have on the church, I can say that you are far better off pitching 99% of them in the trash. It is not hyperbole to say that this is one of the best, one of the most vital books on Christian parenting to come along in recent years (or even decades).

I have said before in earlier posts and I guarantee I will say again in future posts: weak families lead to weak churches. If you want to take a substantive step toward building a strong, Biblical, multigenerational family that will lead to strong, Biblical, multigenerational churches, the best thing you can do is read everything the Bible says about parenting and families. The very next step is to run, don’t walk!, to your nearest bookstore or online retailer, get What he must be...if he wants to marry my daughter by Voddie Baucham, read it, read it again and buy a copy for a friend.
Posted by Arthur Sido at 5:12 PM

Email ThisBlogThis!Share to TwitterShare to FacebookShare to Pinterest
Labels: book review, christian parenting, courtship, family, voddie baucham, what he must be if he wants to marry my daughter, what I am reading