I wrote a piece the other day about the Israeli-UN resolution-U.S. vote abstention kerfuffle, Keeping The Issues Clear When Talking About Contemporary Israel. and it contained a total of zero prophecy charts or references to Genesis 12:3.

Anyway I continue to see people commenting on social media about how outrageous it was for "Christian America" to "stab Israel in the back" and some of the links I have seen are just outrageous. For example: 10 Previous Times America Faced Major Disaster After Attempting To Divide Israel. This is their reasoning:


I am sure that there will be a tremendous amount of debate about to what extent the was involved in creating and drafting this resolution, but there is one thing that is exceedingly clear.

The ultimate decision as to whether or not this resolution would be adopted was in the hands of one man. Barack Obama knew very well that he had this power, and in the end he ultimately decided to betray .

And now that our government has cursed at the UN, our entire nation will be cursed as a result.

In the Scriptures we are repeatedly told that God will bless those that bless and will curse those that curse .

When Barack Obama blocked a similar resolution that wanted to submit for a vote in September 2015, it resulted in being blessed, and we definitely have been blessed over the past 16 months.

But now that Barack Obama has reversed course and has betrayed , we will most assuredly be cursed. In the days ahead we will see how this plays out, and perhaps we can get some hints about what may happen by reviewing recent history.
....
The UN Security Council resolution that was passed on Friday is the biggest betrayal of in modern history. As I explained in my last article, I believe that 's reprieve is now over and all hell is about to break loose in this country.

When Barack Obama blocked the UN Security Council from dividing the in September 2015, according to the Word of God we should have been blessed as a nation as a result, and we were blessed.

But now Barack Obama has cursed by stabbing them in the back at the United Nations, and according to the Word of God we should be cursed as a nation as a result.

And as surely as I am writing this article, we will be cursed.


#1 The last time the government refused to veto an anti-Israel resolution at the UN Security Council was in 1979. On March 22nd, 1979 the Carter administration chose not to veto UN Resolution 446.

Four days after that on March 26th, the Egypt-Israel Peace Treaty was signed in . As a result of that treaty, gave up a tremendous amount of territory. Two days later, on March 28th, the worst nuclear power plant disaster in history made headlines all over the globe.

Ah, that explains the Three Mile Island accident. It wasn't mechanical failures as we were led to believe, no it was the hand of God subtly causing a relief valve to stick open. God is known for His subtlety when He judges a nation, like that whole Sodom and Gomorrah thing.  Lest you brush this off as some crackpot website (although it clearly is), their Facebook page has over a quarter million likes including 7 people I am friends with on Facebook. The Facebook link to the story itself generated more than 11,000 responses, almost 1000 comments and was shares over 8,800 times! 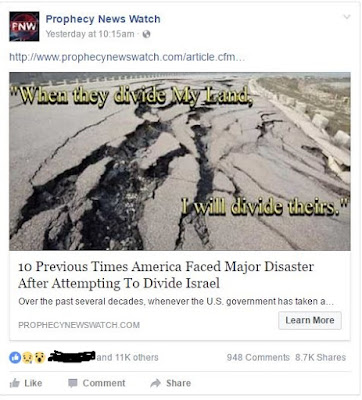 In contrast. Grace To You has about 50,000 fewer likes (but a lot more of my friends) and MacArthur is a dispensationalist! Crazy "prophetic" interpretation and hysterics over current events seems to be a lot more popular in some circles than sober Biblical exegesis. Honestly you get better Biblical scholarship at the Babylon Bee than at "Prophecy News Watch" but people for some reason just love to try to find sense in current events by clumsily cramming them into the Bible.

Of course not all of the responses are this outrageously unscriptural but there is a general sense among a lot of the church that a) America is somehow a unique nation in the eyes of God with an unwritten covenant that other nations are not either bound by or blessed by and b) Christians, especially in America, are likewise obligated to support without question any action by the modern nation called Israel at the risk of incurring God's wrath if we don't. Neither of these is correct and neither has a shred of Biblical support if you move past single verse "exegesis".

Christians have got to get this right and quickly. We look foolish for all the wrong reasons and we risk, and often more than simply risk, making the wrong decision or at least making decisions while only looking at one side of an issue, one that is fraught with diplomatic, religious and military perils.
Posted by Arthur Sido at 1:47 PM