One Of These Was A Date Which Will Live In Infamy

A quick lesson in history and perspective.

This is a scene from the attack on Pearl Harbor 75 years ago. 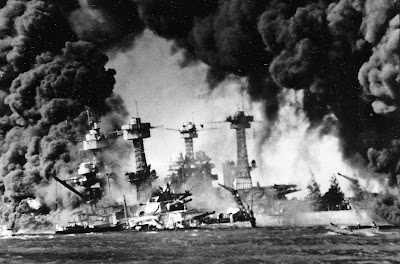 December 7, 1941 was the date of the Japanese sneak attack on U.S. naval forces at Pearl Harbor. It propelled the U.S. into World War II, leading to thousands of American and civilian deaths immediately countless followed by thousands more in the Pacific theater, culminating in the use of two atomic bombs on civilians in Japan leading to the deaths of yet tens of thousands more. That day was an attack on America and a national crisis, a rightful day of mourning.

This a scene from the Presidential election in 2016, just a month ago. 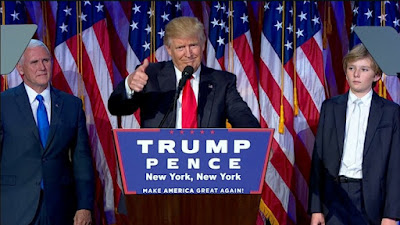 The election of Trump, even if you didn't vote for him like me or hate his guts like so many others, was not a tragedy or a day which will live in infamy. It was the result of our Republic working as intended, the will of the electorate being expressed. He might be a great President, he might be an awful President. Who knows? What is for certain is that his election should be seen for what it was, a lawful and proper working out of our electoral process.

Some people think that the election of Trump was the worst thing EVER. A lot of those same people no doubt haven't a clue what today is the anniversary of or if they do why it is important. We suffer from an overabundance of hyperbole in America and a scarcity of perspective.

As a refresher in case you haven't been paying attention. Pearl Harbor Day, an actual tragedy and a day we should remember in perpetuity. The election of Donald Trump, while it may turn out to be a huge mistake following 8 years of another huge mistake, is not a tragedy and shouldn't be treated like one.

History matters.
Posted by Arthur Sido at 7:14 AM

CS Lewis - Even in peacetime I think those are very wrong who say that schoolboys should be encouraged to read the newspapers. Nearly all that a boy reads there in his teens will be known before he is twenty to have been false in emphasis and interpretation, if not in fact as well, and most of it will have lost all importance. Most of what he remembers he will therefore have to unlearn; and he will probably have acquired an incurable taste for vulgarity and sensationalism and the fatal habit of fluttering from paragraph to paragraph to learn how an actress has been divorced in California, a train derailed in France, and quadruplets born in New Zealand.

CS Lewis (from weight of Glory) - Most of all, perhaps, we need intimate knowledge of the past. Not that the past has any magic about it, but because we cannot study the future, and yet need something to set against the present, to remind us that the basic assumptions have been quite different in different periods and that much which seems certain to the uneducated is merely temporary fashion. A man who has lived in many places is not likely to be deceived by the local errors of his native village; the scholar has lived in many times and is therefore in some degree immune from the great cataract of nonsense that pours from the press and the microphone of his own age.