I Think They Are Starting To See The Light 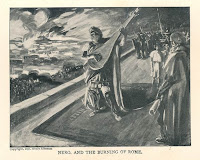 It ought to come as little surprise that I mostly despair for the more traditional manifestations of the church in the years to come. Most of what I call the institutional church is so incredibly inwardly and selfishly focused that it seems that they have no idea that the world has changed and is changing all around them while they blithely fiddle in tune to the sound of our culture burning down around them.

So in light of that I was pleasantly surprised to see some interesting thoughts in what I thought was an unlikely place, namely the BaylyBlog, a pretty hardcore Presbyterian kinda blog. The post in question, Is there a Christian ghetto in our future... , is actually a transcript of a talk given recently by Ken Patrick of Trinity Presbyterian in Ludlow, Kentucky at the Boniface Conference. While much of it was pretty boilerplate doom and gloom (I don't think he was wrong about it), I did want to look at a couple of his "What Now" points. The first one that jumped out at me was pretty startling:


3. Third, let’s abolish seminary degrees. No, really. However they may have begun, many of our seminaries have become co-opted by the heresies of feminism and egalitarianism. They turn out men who are culturally hip and, if our own session is to be believed, biblically ignorant. These graduates become our pastors and teaching elders, and it is these same pastors/teaching elders who crave the approbation of the world. After all, they’re the ones constantly pushing the envelope with regard to liberalizing tendencies. I think it’s fair to say many of our pastors have bought into the desire to be credentialed and respected within the broader academic community. Unfortunately, the broader academic community has become stridently anti-Christian, so what’s a pastor desperately seeking intellectual street cred to do? Well, in the PCA they winsomely (can we retire this word?) set up study committees to examine, once again, the role of women in the church with an eye towards the eventual ordination of women to at least one office, if not more. Why do we put up with this? Why do we allow our General Assembly to be dominated by the professional theologians? Why do we restrict the votes of ruling elders, those men who work in a secular profession all week and don’t often have the luxury of attending a GA hundreds of miles away? Why can’t we broaden the suffrage of ruling elders by allowing remote electronic voting on GA overtures? It’s hard to imagine the PCA would allow the shenanigans it currently permits if the more conservative class of ruling elders were enabled to vote en masse. But this is just one denominational example; if you think I exaggerate, go talk to the remnant of God-fearers in the PCUSA, the ELCA, the UCC, or the Episcopal Church. But back to my suggestion. How would abolishing the credential help us? It would thin the ranks of teaching elders to those who have a greater desire to shepherd than study. No credentials mean lack of academic standing. This means there’s no intellectual status to defend because such men won’t have any academic standing to begin with. We will be liberating our pastors from the temptation to pursue worldly recognition—at least to some extent. Now don’t mistake my zeal for abolishing seminary degrees with a desire to eliminate good, rigorous biblical training for church leaders. I’m all for it, but let the culmination of the training be ordination rather than some earthly credential or degree. Let the amount of training be split between the training institution and the church. Let us make our own shepherds, and perhaps we can train them to be warriors to boot.

You might not care for his talk about seminaries being infiltrated by feminism and egalitarianism, although that is true. What is really startling is the admission that the pursuit of what I would consider to be worldly acclaim via academic accolades is unhealthy. I have argued for a long time that elders should be trained in the local gathering (See my post Repost: Home Cookin' for more details). I mean this is something that I had a hard time believing I was reading from a hardcore Presbyterian. I am not kidding when I said I had to back up and read some of this twice to make sure I understood. The church of the near future is going to need men, regular men, to step up and lead without the "benefit" of shipping them off to spend tends of thousands of dollars and years of their lives pursuing the right to put a couple of letters after their names. There us definitely a place for the academy in the church, just not as a proving ground for professionalized clergy.

His second "What now?" is another subject near and dear to my heart although I am an utter failure at it and that is Christian education:


4. Fourth, the church should more actively promote Christian education. I don’t want to spend a lot of time on propounding the evils of the public schools. If you don’t already understand that they are the primary vehicle by which Satan has indoctrinated millions, then you haven’t been paying attention to what’s going on. You don’t understand that Christian education is a form of fulfilling the Great Commission, a form of discipleship. Any further rant by me won’t make much of a difference. As they are presently constituted, I firmly believe our covenant children should not be in public schools. I think earnest evangelicals agree with this assertion, but we have many families who are in circumstances where obtaining a Christian education is not possible. So let me ask a few questions. First, is our education of our children impossible because we don’t have the facilities in which to educate the children? That can’t be true because the number of edifices owned by the Evangelical church nationwide has to be in the hundreds of thousands. We have the buildings and they go largely unused five to six days a week. This is a scandal. We have the facilities to provide the space for education and discipleship. Second question: is our education of our children impossible because Christian parents can’t afford the tuition? Perhaps, and this too is a scandal. It’s a scandal that the Evangelical church expects young parents to foot the entire bill for the education of covenant children. Ironically, even the pagans understand that the entire community benefits from “educated” children, and thus they spread the cost around the community in the form of property taxes. Typically in this country, the Christian school movement is solely dependent on its customers (parents of school-age children) and has no recourse or connection to the greater Christian community for funding and resources. Our parsimoniousness in this area is a scandal. Is it expensive to pay teachers. Yes, it can be, especially if we expect to have male teachers who are heads of households responsible for raising a family. But what about all the resources of the Baby Boomers in our midst, whether it’s cash, expertise, time—or all three? How many evangelical Boomers are retired in their mid-60s with plenty of time on their hands and nothing really constructive to do, other than their leisure pursuits? If the evangelical church is in a fight for its very existence, why aren’t we using all of our resources? Why don’t we have too many volunteers to educate our children? And I haven’t even touched on homeschooling…

Pay particular attention to this part: "First, is our education of our children impossible because we don’t have the facilities in which to educate the children? That can’t be true because the number of edifices owned by the Evangelical church nationwide has to be in the hundreds of thousands. We have the buildings and they go largely unused five to six days a week. This is a scandal. We have the facilities to provide the space for education and discipleship.".

Yep. We insist on investing in buildings and then leave them empty for most of the week while our kids go to public schools to be taught the precise opposite of what their parents believe. I tried to figure it up a few years again and estimated that the Southern Baptist Convention alone owns property valued at more than $40 billion (see Banging This Drum Again) and that is just the SBC! The problems he highlights get to the core of what I have been barking about for years, the way that the church is so event focused that we miss the people, the community, the family of God.

One of the areas he speaks about that really gets to where I am is his repeated concern about the use of our resources, both money and manpower, in ways that aid the body for more than just making Sunday morning more comfortable. We have so much money and so much untapped talent. Can't we use that to help mentor men and women who have not had godly parental role-models? Can't we, as he mentions, use our resources to help young Christian families with children provide Christian education to those children? What about those that have to choose between a job and standing for the truth: " If you have men who might be losing their jobs due to their faith, what can the Church do to care for these men? When these situations arise, do you know how you will counsel these men? Will you be ready with funds, food, clothing, and shelter? ". I don't have to agree with everything he is saying here to applaud where he is going on this train of thought. Thinking about our financial and human resources as more than just an inward, Sunday morning focused issue and starting to think about those resources strategically is such a great thing to read.

There is still a lot of work to be done but I am encouraged to start seeing men thinking about the ways the church can and indeed must function in the future. We have a long way top go but I think the churches that start thinking this way now are going to be far better positioned for  the uncertain but likely difficult future.
Posted by Arthur Sido at 8:01 PM