There is no topic in America that is more emotionally charged and less fact based than public education. The endless calls for more money and more money and more money ad nauseum are always accompanied by pleas infused with a heaping dose of guilt "Don't you care about the CHILDREN?!" One cannot so much as ask a question about the amount of money currently spent or increased spending being proposed without being painted as a cold-hearted ogre and a pox on your house for nine generations if you inquire as to the results of all of that spending. Along with this is a small but vocal cottage industry of people banging the drum about teacher's being underpaid. That teachers are underpaid is an absolute article of faith for modern America and no one is permitted to push back on it at all. The topic of teacher pay is an interesting one but the broader topic of public "education" is a completely different beast. Case in point, a recent essay from the Washington Post with the sure to be a tear jerker title: Why so many teachers need a second job to make ends meet. Please ignore the fact that many people have to have second jobs to make ends meet, this is about the children you fools!

The essay is written by one Nínive Calegari and she is introduced as follows (emphasis mine):

This is a post about what teachers face when it comes to making an adequate living. It was written by Nínive Calegari, a former classroom teacher who is the founder of the Teacher Salary Project, a nonpartisan organization whose mission is to raise awareness about the effects on the country of underpaying and undervaluing teachers. She is also co-founder of 826 Valencia/National, a nonprofit that provides support to seven writing and tutoring centers around the country.

What does that fumy word, "nonpartisan" mean? Well according to Wiktionary it means unbiased, impartial, etc. 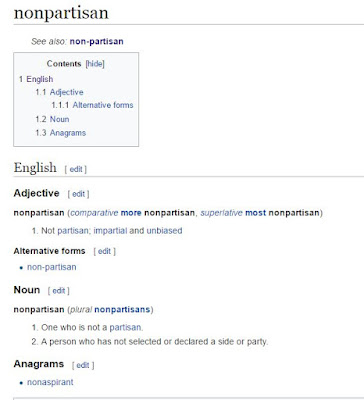 Ah, so this group, the Teacher Salary Project, is unbiased and not partisan. Well that is a relief! She makes a mildly interesting case for increasing teacher pay, although she ignores glaring logical fallacies like comparing teachers to doctors when the reality is that getting an education degree is far less competitive and less demanding than becoming an M.D. But then we get to the end of the "nonpartisan" plea for higher teacher wages where she tells us how important paying teachers well is for....well, just read it for yourself.....

Finally, now, more than ever, if we want to fight global warming, racism, illiteracy, poverty, sexism and homophobia, we need to elevate the teaching profession to the financially viable and prestigious one it deserves to be. Elevating teachers is our chance to show what our values truly are. Let’s pay teachers what we think our students, democracy and future are worth.

Weird, I thought public schools were supposed to teach children basic skills like math and spelling and history, the building blocks of an educated and functional society. Apparently not. Ms. Calegari, I guess in places like Washington, D.C. equipping "teachers" to indoctrinate children on subjects like normalizing sexual perversion and made-up "science" like global warming (low temp tonight where I live is forecast at around -8 to -10 Fahrenheit) qualifies as "nonpartisan" but in the rest of the country the only thing in your final paragraph that counts as education is fighting illiteracy and none of it is "nonpartisan". The rest of that is simple nonsense and shockingly people who work for a living don't want to pay people more to be teachers if being a teacher means pushing that sort of partisan political agenda on our children.

If you needed another example of why people who are self-styled elites in our culture have no idea why Trump won or why the citizens of this country rejected their agenda, here it is. The debate over "education" in every aspect has had next to nothing to do with actual education for a long time and is now simple indoctrination carried out in government camps called "public schools", paid for by people that public school advocates (not teachers necessarily) think are too stupid to make decisions for their own children. The attitude is "Shut up, pay what we say and don't ask any questions about what we do". It is amazing that so many people in a few urban enclaves just assume that schools should be pushing a highly biased, partisan set of political positions instead of actual education.

The widening chasm in our country between two completely separate and distinct people grows wider every day and nowhere is this more apparent than in the differing notions of "education". I am glad we can homeschool our kids even if we do a poor job at it because I simply refuse to have my kids being force fed ideological nonsense under the guise of education. Let's hope that the next four years and beyond see some sort of common sense returned to the education debate.
Posted by Arthur Sido at 7:55 PM