What Sixty Grand A Year Buys You

You might not have heard of Swarthmore College. It is one of those little, very expensive East Coast colleges that probably wasn't on your radar if you went to college. There are tons of these, when I was looking at colleges I got brochures from dozens of them but I never gave them much thought. Anyway, Swarthmore is near Philadelphia and is not cheap. What do I mean by "not cheap"? Look at the picture below from the Swarthmore financial aid page. 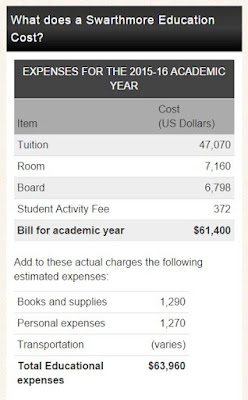 So for sixty thousand per year you would expect a pretty good education. But then there is this, reported by National Review, a scathing indictment of the sexism inherent in teasing girls about their annual love affair with all things pumpkin spice:


According to a student’s op-ed, the real reason that people make fun of pumpkin-spice lattes is that our society thinks everything girls like is stupid because “girls don’t get to have valid emotions.”

“It all comes back to sexism,” Min Cheng writes in a piece for The Phoenix, Swarthmore’s official student newspaper. “People love to hate on what girls like.”

"The PSL hate seems to me like a symptom of a larger problem: girls don’t get to have valid emotions,” she continues.


I think she is serious which is both hilarious and terrifying.

Now I don't think everyone on campus at Swarthmore takes this seriously but I bet a lot of people do. This is the sort of "academic" environment parents (and tax payers in the form of grants and student loans) are shelling out obscene sums of money to exposure their children to, namely a mindset where anything and everything is a symptom of sexism, racism, homophobia, classism, specism and white privilege. This environment is not open-minded and diverse, it is the exact opposite.

This sort of nonsense would be easy to laugh off it it weren't poisoning the minds of young adults who get out in the real world and find that they haven't learned much of any use and then are stunned to find that employers are not begging them to take $50,000 a year jobs right off campus. Since they have been taught to blame everyone else for their misfortune and failure to prepare for adulthood it is little wonder we have a generation of bitter and entitled young adults sulking in mom's basement.

Before you send little Johnny or Susie off to some liberal arts school that will land them in debt for the majority of their adult lives, take a few minutes to ask what exactly they are being taught. You will find that at most schools they are being force fed a steady diet of propaganda, an indoctrination that you are paying for in the hopes of being a "good parent". If you want to really teach your kids to learn and to think for themselves it might just be that the university system is the worst possible place to send your kids and if you do, you owe it to yourself and to general decency to not send them somewhere that is as obscenely expensive as Swarthmore.
Posted by Arthur Sido at 9:10 AM

Email ThisBlogThis!Share to TwitterShare to FacebookShare to Pinterest
Labels: education