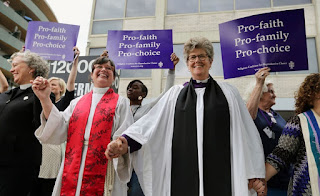 All across social media for the last week I have repeatedly seen the story and accompanying picture (see to the left from LifeNews) of a group of women clergy "blessing" am abortion clinic and praising the "bravery" of the staff and patrons of this clinic, at least the mothers who abort their children, the children being killed don't warrant prayer apparently.  From the LifeNews story United Methodist and Episcopalian Church Clergy Lead Prayer Rally to“Bless” Abortion Clinic.

In , pastor, Reverend Laura Young, says she believes pro-life protesters in front of Planned Parenthood and other abortion facilities have “misguided faith.” In fact, she thinks these clinics should be blessed, which is why she went out to an abortion facility called Preterm on October 8th in . In 2014, Preterm was involved in the abortion-related death of Lakisha Wilson.

Young explained her acceptance of abortion like this: “Christianity, like most faiths, is founded on love. Watching protesters shouting judgment and hate based on what they call religion is horrible. Is that loving God? Is that loving your neighbor as yourself?”

Think Progress reports that the group hopes their “blessing” will protect Preterm from “preachy protesters, as well as encourage the strength and bravery of those providing and relying on its services.” Young plans to go out to other abortion facilities in the state if their event in is successful.

Young also says religious groups are fueling the so-called war on women. She explained, “Women are being attacked at a moral level by the radical Religious Right. They’ve hijacked the political discussion. This event is an opportunity for progressive religious leaders to stop the silence. We need to be in the conversation.”

I hate to break it to Ms. Young but there is nothing progressive about infanticide. It was going on under the auspices of false religion long before Jesus walked the earth and it is condemned as an abomination by the Bible. Along with the article itself is the picture reproduced to the left of a group of clergy exclusively made up of women, dressed up in religious robes and with short haircuts.

This sort of grotesque display doesn't happen in a vacuum. One doesn't go straight from orthodoxy to blessing abortion mills. There are plenty of warning signs that a group or individual is abandoning orthodoxy and walking down the path of damnable error and it usually starts with a position that is uncomfortable to hold in our modern culture. In other words, when the Scriptures are forced to compromise with the world, the world doesn't get more holy but the Scriptures inevitably lose their power and authority.

I have seen a disturbing trend in the church to diminish the significance of the Scriptures, relegating them to a nice source of sermon quotes and memes but really being guided by the world, by pragmatism and an amorphous definition of "following Jesus" which more often than not seems to be "making things up as I go without really consulting Scripture". This is not restricted to United Methodists, ELCA Lutherans, Episcopalians and MC USA Mennonites. It is cropping up more and more in people who generally are pretty orthodox.

The United Methodists and Episcopalians started down this road in the 20th century and one of the most visible signs is the presence of women elders. A lot of people seem very willing to decry the blessing of the abortion mills but are silent on the leading indicator of this sort of blasphemy, namely the recognition of female elders/pastors.  It is easy to post something publicly on Facebook about how terrible it is to bless abortion mills but it is a lot less popular to point out the errors that led to this point, including the calling of women to a function in the church that is reserved for men.

The Bible forbids women elders in both the way it speaks of elders as exclusively a male calling and also by directly forbidding  to women one of the most critical aspects of the elder, namely the teaching function within the church. Women can and are encouraged to teach younger, less mature women but are absolutely forbidden to teach the broader church including men. This is one of the least debatable positions in the New Testament but man does it rub a lot of people the wrong way.

I often get pushback on this that includes some language about how talented a woman is and that my wife/my mom/my sister "feels called" to ministry. I can't speak to what led women in each of the cases I have been cited to think they were called to be elders but I do know this for certain, if you think you are being called to something that is contrary to what Scripture teaches, your "calling" is not from God. That may sound harsh but that is just the plain truth of it. I may also seem to be beating a dead horse here but the evidence is right before your eyes and one of the most obvious places we see capitulation and fear of judgment is in the ordination and calling of women to roles reserved for men.

I am not suggesting that straying from Scripture invariably leads to women "pastors" with short hair cuts blessing abortion clinics but I am quite certain that when we are less faithful in what seems to be the small matters, it is much more difficult to stay faithful with the big stuff. It seems to me that saying women shouldn't be pastors is a much easier pill to swallow than saying that a Jewish guy was killed and rose from the dead three days later in the first century. I am also aware that it is possible and pretty common to get so focused on the "small stuff" that you gloss over the "big stuff" and cause unnecessary division. That doesn't mean the "small stuff" in unimportant, just that we need to beware of spending all of our time focused on it.

Beware of those voices that call for capitulation in the "small stuff". It is tempting and it is pretty easy to shrug off stuff in the Bible that seems so old fashioned and dated but it is always critical to remember that God chose that time and that place to reveal the fullness of revelation in His Son and to preserve that record of revelation in the Bible. Jesus didn't come in the 60's to lead the vanguard of the sexual revolution. He didn't come in contemporary times to bless same-sex "marriage". No, He came in the midst of a primitive time but the truths that He and His chosen apostles revealed are timeless. We twist and ignore Scripture today at our own peril. The real blame for women clergy blessing an abortion clinic is found many decades ago when humans started to echo the serpent in the Garden "Did God actually say...?". Yes He did and we are not permitted to revise what He revealed.
Posted by Arthur Sido at 1:45 PM

I'm not shocked these days, but I can only feel utter disgust at the attitude, and sorrow for those deceived women.!

Great post. Do you believe that a weak view of leadership in the Church, in particular as relating to ordination, lends to this kind scripturally antithetical view of abortion?

I don't think a higher view of ordination would help but certainly a faithful expression of the calling and sustaining of elders in the church using the Biblical basis would eliminate some of the nonsense these "clergy" are spouting.