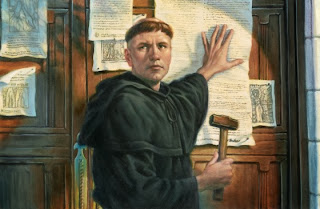 Today is October 31st and in many circles of the Protestant world it is Reformation Day. On this day 498 years ago a nobody named Martin Luther posted a series of questions known as his 95 Theses to the church door in Wittenberg, What followed is known as the Protestant Reformation and depending on where your loyalties lay it is either a date for celebrating as the Gospel was reclaimed or an infamous date when the supposed unity of the church was forever shattered.

For me it is a day of mixed emotions. On the one hand this marks the days of Post Tenebras Lux, after darkness, light. The Biblical gospel of justification by faith alone was recovered and spread like a wildfire. In spite of the tragic violence that sprang in part from the Reformation, on balance the saving Gospel was worth all the strife and division. What value is there in peace when it comes at the cost of men's souls? On the other hand, the Reformation left much un-reformed, specifically the church. Protestantism retains much of the structure and organization of Rome: a professional clerical class, a tendency toward institutional self-preservation, a largely passive laity, ritual and tradition. On and on. So it was at best an incomplete reformation. I don't accuse the Reformers of being too radical but not being radical enough. Thus my affinity for the Anabaptists who suffered from persecution and murder at the hands of those who allegedly were their brothers in Christ.

Today? Is the Reformation complete and over? Not hardly. Within the church there are as many false teachers and false teachings as at any point in church history. The church needs bold men to shout from  the rooftops the Gospel of Jesus Christ and at the same time calling to account the flase teachers and the wolves among the sheep for they are plentiful. As we near the half century mark there are still many Christians who seek an unequal partnership with Rome based on politics, especially now that Jorge Bergoglio has become the religious equivalent of the Beatles for many on the left of the religious spectrum. Many on the political right seek to minimize the differences with Rome in order to secure a partner in worldly battles. Now more than any time in my life or the life of anyone reading this we need to reclaim the godly heritage and the boldness of the great Reformers, Martin Luther, John Calvin, Menno Simons. Remembering that they were men with feet of clay just like us but blessed by God with a powerful boldness that stands in stark contrast to the weak and flaccid faith of so many today,

God send reformation on your church in these days of growing darkness and great turmoil. We need reformers for our day who will not preach compromise and capitulation but who will stand firmly on the Gospel of your Son revealed and preserved for us in the Bible. Let that written Word be the only place we stand and let the teachings therein be boldly and without apology be declared.

Watch the video below of John Piper talking about Post Tenebras Lux and have a happy Reformation!