Thanks to Robert Martin at the Abnormal Anabaptist for his reminder that today is the anniversary of the martyring of Anabaptist Dirk Willems. If you don't know the story of Dirk, it is one of the most poignant reminders of the principle of non-resistance and enemy love that marks Anabaptism. Dirk was imprisoned by the Roman Catholic authorities for the crime of Anabaptism but managed to escape before his execution. From the Mennonite Quarterly Review we pick up the story as Dirk was pursued by his jailers:

Seeing him escape, a palace guard pursued him as he fled. Dirk crossed the thin ice of a pond, the "Hondegat," safely. His own weight had been reduced by short prison rations, but the heavier pursuer broke through.

Hearing the guard's cries for help, Dirk turned back and rescued him. The less-than-grateful guard then seized Dirk and led him back to captivity. This time the authorities threw him into a more secure prison, a small, heavily barred room at the top of a very tall church tower, above the bell, where he was probably locked into the wooden leg stocks that remain in place today. Soon he was led out to be burned to death. 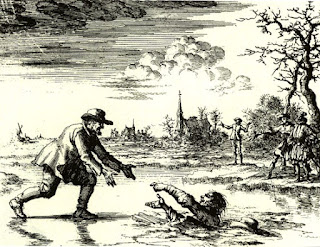 By stopping to save his persecutor, Dirk Willems was recaptured and lost his life in a horrifying way, the combination of burning and suffocation that made being burned at the stake so agonizing. That makes little sense to us. Why would you help someone who was trying to capture you so that you could be burned at the stake? Serves him right, let him drown! It doesn't seem very sensible to us but to the Anabaptists who took the teachings of Christ literally and seriously there is nothing more Christ-like than loving your enemies even unto death.

We need to recover that vision of complete sacrifice that has marked the lives of so many disicples of Christ, many of whom lost their lives for the sake of the Gospel. Being a follower of Christ is not easy, it is not safe and it will cost you your life one way or the other but it is the only way for a believer to live.
Posted by Arthur Sido at 3:10 PM

thanks be to God, as we are reminded here.