In Case You Needed A Reminder, Globalist Corporations Are Not Our Allies

Hey conservatives, remember that huge tax cut we gave corporate America? Well, now they're going to join the lobbying effort to take away your rights.


That pretty much captures it. Companies like Metlife, Hertz and Enterprise are severing their relationship with the National Rifle Association and essentially daring the membership of the NRA to do anything about it. Since conservatives are terrible at this I am guessing not much will happen. It is like corporations pandering to homosexuals, the risk of offending normal people who don't do business ideologically is pretty slim so we get to see dudes pawing each other in commercials to appeal to the tiny fraction of people that are homosexual in this country. The same is true here. There are over 5 million active NRA members and millions of other Americans that are not dues paying but might as well be. I recently renewed my membership which had been lapsed for years but I pretty much voted 100% in line with the NRA and followed their news posts even when I wasn't paying dues. Regardless the profit calculation says risking offending millions of consumers is less dangerous than some bad P.R.. They are probably right.

This is how the "alliance" between the big globalist corporate world and middle American religious conservatives go. We show up in droves to the polls to elect Republicans on the promise of getting things that are important to us like restrictions on abortion, conservative judges and immigration enforcement. When the Republicans get power, we don't get much or any of that (sometimes the judges because they also rule in favor of corporations). What we mostly get is a condescending pat on the head and excuses.

Of course we get super important tax cuts for the corporations and lots of deregulation, all of which is good and I support wholeheartedly but it isn't exactly like the rank and file are getting equal value for showing up by the millions and we often get lied to and betrayed as part of the bargain.

Corporate America is not our ally. They will and regularly do sell us down the river at the first whiff of controversy, because taking risks and bad publicity of any sort is bad for profits. That is fine, I understand that. I just don't want to pretend that we are after the same thing. I would gladly support trade barriers in return for eliminating abortion and I won't abandon 2nd Amendment rights no matter how much it might make the 401(k)s in this country grow. Ultimately globalist corporations are not cowardly but they are at best amoral. They don't care who buys their goods and services. A credit card swiped by a homosexual couple is just as good as one from a normal married couple. An illegal alien buying a phone is no different to Apple than someone with a family that goes back to the Pilgrims. As long as they are hitting their quarterly targets nothing else matters. For people like me? I am concerned about the future of this country that I leave for my children and future generations. I care about the survival of Western civilization that in spite of many flaws is still the greatest force for good in world history. That means that next quarter's profits are not as important as long term trends that are transforming our nation. A 10% annual return in my IRA portfolio is meaningless compared to the lives of the unborn. My right to keep and bear arms is not for sale.

I have been on this trajectory for a while. The Republican Party has wasted my vote for too many election cycles. There needs to be a serious alternative to the mainstream conservatism that is owned by the corporations and the warmongering neo-cons. Maybe that is the Constitution Party. Maybe something that doesn't exist yet. I think the latter is more likely and I will be writing more about that soon. All I know is that the GOP cares more about what is good for the U.S. Chamber of Commerce than it is in what I and tens of millions of actual conservatives care about and I am pretty much done with it. Conservatives are suffering from Stockholm Syndrome with the Republican party. We are convinced that in spite of our captivity and the abuse we suffer that the GOP really does love us deep down. In many ways we are the mirror image of blacks and the Democrats. Dems haven't given a fig about blacks for a long time and they don't really pretend to other than giving them the same empty promises and pats on the head that conservatives get from the GOP. Starting a new movement takes an enormous amount of energy but I think there is a ton of energy out there untapped, weary after decades of being lied to and having lame empty suits or outright sociopaths like Mitt Romney and John McCain foisted on us, but ready to get fired up for the right movement. Trump tapped into that and he won even though we have been told for decades that the GOP has to embrace unlimited immigration to survive.

It is time to wake up people. It is time to name names and find out who is really on our side and who just gives us pats on the head. 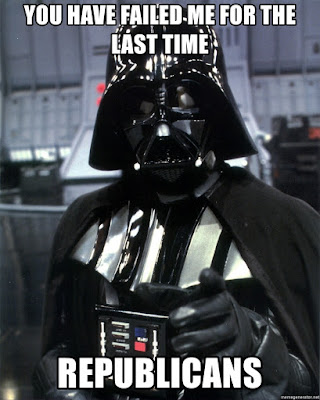