How Many Churches Will Egalitarianism Claim?

Albert Mohler penned an essay today looking at the new "Illumination Project" report out of the Cooperative Baptist Fellowship, the splinter group formed in response to the Southern Baptist "Conservative Resurgence". His essay, All Other Ground is Sinking Sand: A Portrait of Theological Disaster, is a good history lesson, although one must keep in mind that there is a partisanship about it given that Dr. Mohler was one of the pivotal figures in the Conservative Resurgence and remains one of the steadfast proponents of biblical authority in the SBC.

Mohler's essay reminds us yet again of a simple truth: there is a fork in the theological road that all denominations and local churches must eventually choose, whether to call women as elders (or ordain  them as pastors to use the institutional language). When one chooses to ignore the teaching of Scripture and call women into positions of authoritative leadership in the church there is a nigh inevitable downgrade that follows. As Mohler wrote:


This is also the logical consequence of adopting a hermeneutic that allows for the service of women as pastors — for many CBF congregations, the key issue of outrage at the SBC. The same negotiation and “reinterpretation” of the biblical text that allows for the service of women pastors will logically lead to the acceptance of the LGBT revolution. How can it not? Individuals and congregations may refuse to take this next step, but they have surrendered the only binding argument that would offer an objective truth claim. Eventually, the revolutionaries will win, and they know it. Clearly, some appear unwilling to wait.

I am not aware of an example where a denomination chose to call women as elders while remaining faithful to Scripture in other places over the long term. There is no path where women elders and orthodoxy walk hand in hand. This is the inevitable result of practical egalitarianism... 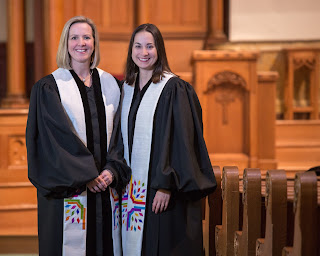 Two "married" lesbian "Senior Ministers and Co-Pastors", the "reverend" Maria Swearingen and the "reverend" Sally Sarratt who head up Calvary Baptist Church in Washington, D.C., an "ecumenical, multi-racial, multi-ethnic Christian body". The "co-pastors" wrote a screed in response to the "Illumination Project" report, where they express anger and not without reason for the CBF's schizophrenic treatment of homosexual sin, allowing open homosexuals to be hired for some positions but not for others. Their open letter includes the obligatory MLK quote, langauge about "colonialism", "violence" (Scriptural faithfulness is now violence apparently), "imperialism" and the "exportation of violent theology all over the world in service to Empire". Mixed in with a grab-bag of "progressive" nonsense is am ominous statement from these "co-pastors" (emphasis in original).


First, while all people may be equal, all opinions are not equal, nor should they be given an equal place at the table. This is a morally debilitating myth we keep telling each other to pacify conflicts and coddle our fears over disagreement and loss. Jesus did not think all opinions were equal. Jesus’ witness and example demonstrates that the opinions, better yet the lives, of the dispossessed were worthy of more time and attention than calculating mathematically equal air-time for everyone. The fact that we think decision-making in light of the gospel of liberation should look like “equally valid opinions getting equal time” is not only absurd, it is a striking example of the “banality of evil,” as Hannah Arendt describes it.

Read that again. Behind the "progressive" language of tolerance and the nice smiles of the two lesbian "pastors" there is a far more insidious message here, one I have run into personally on social media. All people may be equal (and then again they may not) but not all of their opinions are equal. To paraphrase the warning words of George Orwell, all animals are equal but some are more equal than others. In other words, these women have decreed that some opinions are just not worthy of being held and are not worth being considered. Someone with a firmly held belief, as the church has held for 2000 years, that homosexual behavior is incompatible with full inclusion in the Christian community, much less leadership, is not only mistaken but they are not even worthy of being heard. This is a sinister belief. I have been told online that because of who I am, my opinions are automatically invalid and unworthy of being heard, regardless of the merit of what I am saying. Here we sit in 2018 and a couple of women who fancy themselves married and elders have declared that the essentially unanimous position of the greatest pastors and theologians of the church for 2000 years, from Paul and Christ Himself to present day, are null and void and are not even deserving of being given "equal time". It is pretty easy to win an argument when you don't allow your opponent to speak at all. 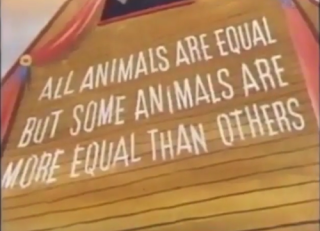 This is the state of the "progressive" church.


It is anti-Scriptural, anti-intellectual, illiberal and authoritarian in the extreme. Ultimately it is anti-gospel and in the spirit of anti-Christ.

Is it "progress" that debates over the application of Scripture are closed down without even so much as consideration? I am glad to discuss any topic with any person with an open Bible because I am confident in my positions and hopefully humble enough to be corrected by Scripture where I am wrong. The oxymoronic phrase "progressive Christianity" is just code for a religious veneer of respectability slapped over old fashioned authoritarian thought policing. Maria Swearingen and Sally Sarratt are representative of the totalitarian progressive impulse to push an agenda by shutting down conversation and attempting to control speech and thought itself.

Like the mass media shedding the last vestige of impartiality and journalistic integrity in the Trump era, the "progressive" religious authoritarians have given up even pretending to engage in Scripture, however clumsily, and have openly resorted to demanding that certain opinions, no matter how Scripturally supported and historically grounded they may be, be considered Thoughtcrime. It is high time we stop pretending these are wayward members of the church and start to call them what they are: heretics and false prophets, wolves among the sheep. What Maria Swearingen and Sally Sarratt and Rachel Held Evans and the majority of the mainline denominations and even apparently in a clumsy sense the Cooperative Baptist Fellowship are championing is not a variation of Christianity, a mistaken but sincere expression of the faith, but another "gospel" entirely where sin is celebrated and faithfulness is silenced.
Posted by Arthur Sido at 3:54 PM

I think you're right about the logic of female elders and the logic of homosexual marriage being basically the same, and many denominations have gone down the road from one to the other. However, so far as I know, the Assemblies of God, the Salvation Army and the International Church of the Foursquare Gospel are examples of denominations that have allowed female pastors for generations, but who have not supported homosexual marriage. So far as I know, each of those groups allowed women to be pastors from the beginning of the denomination.

I'm not defending the idea of female elders; just pointing out information.

I didn't know the AoG allowed women pastors to be honest.