Dissolving The Union: The Central States Of America

My series on how the U.S. could dissolve the union and form several independent nation-states now moves to a more difficult and near-and-dear region for me: the Midwest. The states that make up this new region, given the horribly unimaginative name "The Central States of America" (CSA herafter, which I know also used to mean the Confederate States  )  includes the states where I have lived most of my life: Ohio, Michigan and Indiana. We also lived for several years in Kentucky and a short stint in Wisconsin so this is my homeland. 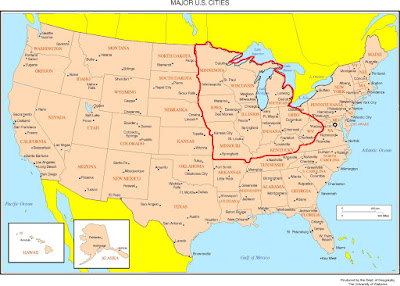 It would include by far the most politically diverse mix yet thanks to the vast swaths of deep red rural and suburban areas surrounding the deep blue cities like Chicago and Detroit.

The CSA includes the industrial heartland of the U.S., the so-called "Rust Belt" that runs along the top of Indiana into Ohio and Michigan. The amount of manufacturing in places stretching from Gary, Indiana to Toledo, Ohio is incredible as anyone who has lived in this area knows.

It also includes a lot of the most productive agricultural ground in America. While Cowlandia has a lot of wheat, the CSA is home to the corn/soybean states of the U.S. plus some of the biggest dairy states around in Wisconsin and Michigan. While Cowlandia has the lion's share of cattle feeding production, the CSA is king of hog production with six of the top eight states for hog raising including the granddaddy of pork Iowa which has triple the production of the next closest state.

Add in the coal grounds of West Virginia, Kentucky and SE Ohio and you have a very economically vibrant and independent area. The big issue I have tried to avoid is a very 19th century preoccupation with having access to the sea, which the landlocked nation I propose would at first blush not seem to have but that doesn't take into account the Great Lakes. The Great Lakes have a ton of ports and thanks to the Saint Lawrence Seaway you can get from the ports of Chicago, Detroit and Toledo to the Atlantic Ocean.

I originally carved off the northeast corner of Ohio, including the city of Cleveland, and put that in the Yankee States of America. I am not sure that makes sense now as culturally Cleveland is very Midwestern.

Chicago is by far the largest city in the CSA, has a huge airport and rail system and is centrally located so it would make sense to be the capitol.

The CSA would have around 65 million people if you leave Cleveland out of the mix. That is 20% of the population of the U.S. so one in five current citizens would find themselves in this new land which is about right. It is rich with large cities: Minneapolis, Milwaukee, Des Moines, Kansas City,  St. Louis, Chicago, Detroit, Indianapolis, Columbus, Cincinnati,  Louisville. From high tech to farming to manufacturing, there is a lot of economic activity. Infrastructure is powerful with criss-crossing interstate highways, major airports, seaports and railways. Perhaps most importantly of all, the CSA sits on the greatest treasure in America, the vast fresh water reserves of the Great Lakes. When you include the plentiful cultural and educational resources, including the research schools of the original Big Ten, I think the CSA could very easily thrive as a nation.

Sounds great, right! Not so fast. Look at an electoral map by county from 2016 focused in on the CSA: 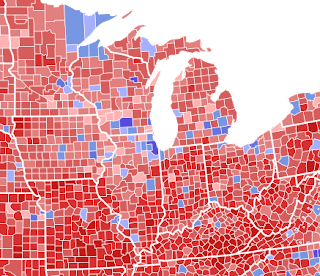 While you see a lot of red, as is true in most of the US, there are a lot of pockets of blue and even deep blue. Those happen to include a lot of the most populous areas like Detroit and Chicago. Trump carried the entire CSA except Minnesota and Illinois but that can be a little deceptive. Trump won Michigan by around 10,000 votes and Wisconsin by 22,000 votes. On the other hand Hillary won Illinois by almost a million votes. While you can drive around where I live for an hour and not run across a Hillary voter (Trump won my county 71%-23%), in terms of total population the people of the CSA are very divided. Just four years earlier Obama won half of the ten states that make up the CSA.

There is more to life than politics. The people of the CSA, for the most part, are joined together by a lot of threads from our sports rivalries to our common Midwestern culture. Having lived in the Northeast and the Mountain West in addition to the Midwest I can tell you that the culture of rural northern Michigan is a lot more similar to Midwestern large cities (except maybe Chicago) than those cities are to the big urban enclaves back East. We tend to be more down to earth, more religious, we call it pop instead of soda. We like fishing and mowing big yards.

We also have our issues here in the Midwest. Many factories are idled. The CSA is ground zero for the opiod epidemic. There are a lot of dying small towns as farms keep getting bigger and the jobs move overseas. Racial animosity is still very strong in many parts of this region. Some states, especially Illinois, are a fiscal trainwreck. So this is not all just taking our Big Ten schools and quietly leaving the Union.

As I said initially, I started with the two easier new nations, the Yankee States of America and Cowlandia, because they were the neatest two regions in an inevitably messy process. Creating a new nation out of the Midwest would be challenging but I also believe that thanks to our willingness to work together and our shared values that transcend politics, we would survive and thrive on our own. That leaves me with the Pacific West and the Southeast and those have some issues of their own.
Posted by Arthur Sido at 4:00 PM

Email ThisBlogThis!Share to TwitterShare to FacebookShare to Pinterest
Labels: dissolving the union