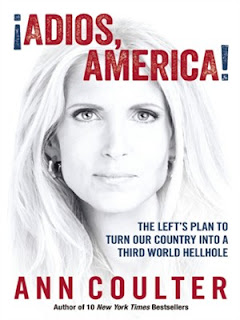 While at times hard to read, Ann Coulter's 2015 bestseller Adios, America! is a powerful and thoroughly researched look at the immigration issue in America from a hardline position. Ann is in many ways the embodiment of Campaign Trump, not to be confused with President Trump. She daily posts a mocking tweet on the lack of progress on the border wall:


No one is going to be confused as to where she stands on the question of immigration but even if you don't agree with her, her research ought to give you pause.

Ann Coulter does her level best to make herself someone you dislike and someone you dislike is someone that is easy to ignore. She is sarcastic almost to a fault, said as someone who is pretty sarcastic, and sometimes says things that are so acerbic as to make even a hardened reader cringe. It is her schitick and I get it but it also means that it can be easy to not take her seriously. This book, even with the over-the-top title and subtitle ("The Left's Plan to Turn Our Country into a Third World Hellhole") absolutely demands to be taken seriously because the topic it covers is so very important.

The number one problem with this book is that it came out in June of 2015. It came out before Trump announced and therefore it looked for all the world like the Republican nominee was going to be just another empty suit, pro-amnesty at the bidding of the U.S. Chamber of Commerce GOP-bot. Things have changed in this country since 2016 but there is still a lot of concern that mirrors what Ann is writing about.

For Coulter in this book, immigration is everything and she rightly recognizes an inconvenient truth: Democrats only care about immigration for one reason....


The reason Democrats support immigration is because of how they vote.

Democrats only care about the children of lawbreakers when it will get them 30 million new voters. Convicted felons are next.

That is the core of the immigration debate from legal immigrants to illegal aliens to amnesty for "Dreamers". It is all about electoral math. Democrats have abandoned the White vote and are relying mostly on minorities and immigrants to propel them to victory in the future. The GOP doesn't seem to get this but for Coulter every single other issue is secondary to immigration because once there are sufficient "new Americans" to reliably vote Democrat, states like Texas and Florida will become like California and never vote Republican again. That means no tax reform, no protection of 2nd Amendment rights, no conservative justices, no restrictions on abortion or the demands of the militant homosexual movement, no restraint on spending or the welfare state or job killing bureaucratic regulations. Lose on the immigration issue and you lose everything....


What happens with immigration will determine whether America continues to exist or becomes a Third World republic that will never elect another Republican—in other words, “California.” It’s more important than gun rights, right to life, taxes, or Iran’s nuclear program—or whatever other issue you care to cite, because immigration will decide all issues, once and for all, in favor of the Democrats.

It does seem a little callous to reduce people to electoral math but that is the reality of the immigration debate.

From liberal activists seeking new voters to rich Republicans that want cheap lawn care and nannies, there is a powerful cabal of people that want virtually limitless immigration. The Left needs new voters and the wealthy aren't impacted by mass immigration so we see what should be a weird alliance between Republican elites and far left loons. Left out of the equation are regular working Americans, especially minorities and low income workers that are displaced by an endless flow of workers that will do the same job for less and that turn around and send their wages out of the country, a massive outflow of at least $20 billion a year that in turn enriches the wealthiest in Mexico, like Carlos Slim, who in turn are incredibly influential over U.S. media sources like the New York Times. It seems odd but the only people that seem to care about the displaced workers in America are people like Ann Coulter. While "conservatives" like Bill Kristol casually advocate for the wholesale replacement of the current American workforce, people like Ann are not willing to go down without a fight. Perhaps it will be in vain, it probably will be, but at least some of us are trying and Ann, for all of her sometimes unpleasant rhetoric, is one of them.
Posted by Arthur Sido at 11:06 AM