One of my working theories is that many men on the political far Left who proclaim the loudest that they respect womyn and are "male feminists" actually hate women. I think the reason for this is that modern feminism is basically man hating. That sounds kind of Rush Limbaugh-esque but it also happens to be true. Contemporary feminism seems mostly concerned less with women having equal opportunities as men and more with the absolute degrading of men. What this leads to is a weird self-loathing from liberal men who are forced to despise and hide their own maleness to appear properly "woke". What it doesn't do is eliminate their maleness, as much as they might try to make it appear that way. What it simply does is force it below the surface where it boils up from time to time when there is an "acceptable" female target. You saw this a lot with Sarah Palin who so incensed liberals that there were lots of sexually violent insults hurled at her. Playboy Magazine ran an article by Guy Cimbalo, since deleted, listing conservative women that the author would like to rape. Even leftist luminary J.K. Rowling went on a Twitter rampage about the way liberal men attack women that are "safe targets" because of their politics. Here is the money tweet, number 3 of 14:


I’m sick of ‘liberal’ men whose mask slips every time a woman displeases them, who reach immediately for crude and humiliating words 3/14
— J.K. Rowling (@jk_rowling) June 9, 2017

The "mask slipping" is a perfect way to describe it. It is very sad and disturbing but not surprising. These "men" hate women because of what they perceive women have done to them in the name of feminism.

Enter ambulance chaser and pro-rape lawyer Robert Ranco of the Carlson Law Firm in Texas that specializes in "personal injury" (i.e. ambulance chasers), medical malpractice, divorce, etc. In other words a pretty garden variety sleazy law firm. Mr. Ranco is obviously a top-notch lawyer and you can reach him by calling 512-346-5688. Mr. Ranco is a graduate of the prestigious University of Maine School of Law and is an undergraduate music major from Dartmouth. Maine is ranked the 139th best law school by U.S. News and World Report which places it in high class company like the University of Akron, the Universities of both North and South Dakota and the University of the Pacific. In fact since they only gave out numerical rankings from 1-148, Mr. Ranco graduated from a law school ranked in the bottom 7%. It is hard to imagine how he ended up an ambulance chaser instead a Supreme Court Justice with credentials like that. Maybe he just cares too much about people who get rear-ended in Texas to bother with a trifle like the Constitution. What is really funny is how his bio describes him: 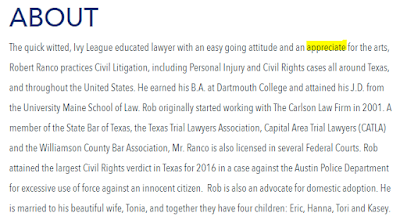 If you missed it here is the critical sentence:

The quick witted, Ivy League educated lawyer with an easy going attitude and an appreciate for the arts...

Apparently an Ivy League education (an undergrad music degree from Dartmouth) doesn't mean much as they don't teach grammar these days.

Anyway, Mr. Ranco fired off the following tweet, followed very quickly by making his account private and then deleting it entirely but not quickly enough. You can't undo what you say on the internet, something you would think an "Ivy League educated lawyer" would have known.


Quick witted and easy going indeed! Nothing says quick witted like posting a pro-rape tweet about a Cabinet Secretary and nothing says easy going like sort of wishing someone you don't even know would get raped because she holds the primitive and patriarchal notion that college men should have some basic legal protections when accused of a felony. I guess they didn't cover that sort of stuff in the rarefied air of the University of Maine School of Law. They must have been too busy talking about coaching plaintiffs to show maximum discomfort and emotional distress on the stand.

When someone tells you how liberals respect women and how conservatives hate women, just remember that when the "mask slips" you see an awful lot of liberal men demonstrating a misogyny that puts Rush Limbaugh and Donald Trump to shame.