With the news of hurricanes and the endless political squabbling among the spoiled children that "represent" us in Congress and the White House, it is perhaps understandable that we neglect September 11th. But it is not forgotten in our home. My wife and I talked about how raw the emotions still are today, how videos of that day still give me that feeling of being punched in the stomach. I still remember being on the phone with my wife from work and her telling me another plane hit the World Trade Center and just like that we all knew this was no accident. 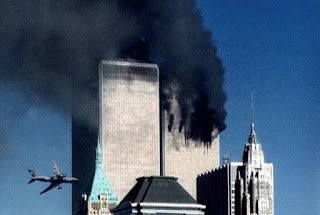 The days that followed were like a waking nightmare as we learned more, or at least thought we learned more. Three days after the attacks President Bush gave a speech at the National Cathedral. Like pretty much every American I watched our President speak from the pulpit and offer both soothing words and the threat of violence to come. 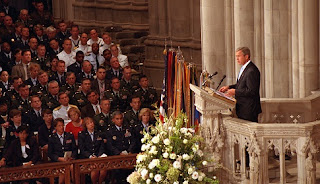 Some of the language he used that night was inspiring at the time but seems almost ominous now...


Just three days removed from these events, Americans do not yet have the distance of history, but our responsibility to history is already clear: to answer these attacks and rid the world of evil. War has been waged against us by stealth and deceit and murder. This nation is peaceful, but fierce when stirred to anger. This conflict was begun on the timing and terms of others; it will end in a way and at an hour of our choosing.

A Christian man standing in a pulpit pledging to rid the world of evil, something that he and I should have known was foolish. Just three days had passed but the wheels of vengeance were already turning. Not just vengeance toward those that had carried out the September 11th attacks but those we felt helped or inspired them, those that supported terror or those we just didn't like. I went as far as getting a military physical in Columbus, Ohio and was really just days away from going into the Air Force Officer Candidate School, inspired by a need for vengeance. 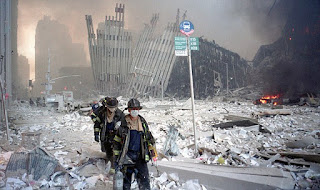 Weeks after September 11th, U.S. and NATO forces entered Afghanistan. By the end of January 2002 President Bush gave his "Axis of Evil" speech. About a year later we invaded Iraq.

Osama bin Laden is long dead, killed in Pakistan while living like an animal. Saddam Hussein is dead, executed by his people, after being captured and dragged from his hole. Taliban leader Mullah Omar is dead of natural causes. We have killed and killed and killed.

The images above are the sort of images that have dominated the last 16 years. My son that was 2 at the time is now old enough to enlist, although he absolutely is not, to fight in the wars we started after September 11th and that we still are fighting. Three of my kids were not even born yet. Almost 7000 Americans have died in the fighting in Iraq and Afghanistan and untold tens of thousands more are wounded and maimed in body and mind. The butcher's bill for Iraq and Afghanistan among their civilians is staggering. Still there is no end in sight, especially in Afghanistan, a nation rightly called the place where empires go to die.

The current instability of the Middle East is a direct result of our meddling in the area. When you look at the conflagration in Syria, Libya, Yemen, etc. along with the rise of ISIS and the endless sectarian wars in Iraq, you can draw a line straight back to the decision to use 9/11 as cover to invade and "liberate" Iraq. The Taliban in Afghanistan are poised to take back over the moment we leave and this has led to a deadly standoff where we can't afford to stay when we have no mission but we don't dare leave and allow the Taliban to take back over.

You can say many things about the aftermath of September 11th and most of them are some variation of "We screwed up" and thanks to that screw-up, tens of thousands of people are dead. Radicalism is ascendant across the Middle East. Terror attacks are a weekly occurrence in Europe. I and many other suspect very strongly that there is a lot about September 11th itself as well as the aftermath that we don't know and could only guess at but it is certainly true that our trust in our government is at an all-time low.

Decades of meddling in the Middle East led to the September 11th attacks and the years following have only made things worse. I can only hope that at some point we finally learn our lessons before something even worse than 9/11 happens. I can't say I am terribly optimistic that will be the case.

Never forget September 11th and never forget what happens when a nation uses a tragedy to start an even greater tragedy.
Posted by Arthur Sido at 9:43 AM