On Taking A Knee, SOBs And White Supremacists Hiding Under Your Bed

Everyone else is weighing in on the kneeling for the anthem thing, it even trended on Twitter with dueling hashtags, #TakeTheKnee and #TakeAStandNotAKnee, so I might as well too.

I am going to "get real" as the hep cats say these days when cutting a rug at the sockhop so hold onto your hats.

Let me state at the outset that I believe anyone can speak their mind on any topic at any time. If you want to kneel during the National Anthem, that is your right as a citizen of the United States. I don't put my hand over my heart when it is sung for the same reason I don't say the Pledge, my loyalty is to my King, not a specific country, but I do remove my hat out of respect for this nation.

Also, Trump weighing in on this controversy in his normal brash New York style is unhelpful but that is what we expect from him. If you taunt a bull, he is going to charge and a lot of people in America are the political equivalent of rodeo clowns, on several levels.

On the other hand, NFL players are employees representing their employers who pay them millions to entertain fans. The NFL has a compelling interest in protecting their brand which is one of the most valuable in the world. When I worked for a place like Fidelity Investments back in the day and was on business, or wearing their logo on my shirt, I kept controversial opinions to myself. A business lunch is not the place to discuss controversial topics. I was on my employer's dime and was representing them to clients with tens or hundreds of millions invested in that organization, so I didn't have any First Amendment right to endanger that relationship. I used to quietly pray before meals at business lunches but I didn't try to proselytize my clients. The NFL would be well within their rights to fine or otherwise punish players that are clearly doing damage to the relationship between the NFL and their customers, i.e. the fans and the advertising sponsors.

Also on a different other hand, while it is not required, it would be nice if the NFL players kneeling had a clue what it is they are protesting other than vague references to "racism" and "police brutality" and of course "White supremacy". The last is my favorite. "White supremacy" has entered the meaningless and counter-productive word lexicon. Everything is White supremacy. Trump winning? White supremacy. People who are understandably upset at players seeming to disrespect the flag and the police that they expect to protect them while playing? White supremacy. I put together a handy infographic about this over the weekend.... 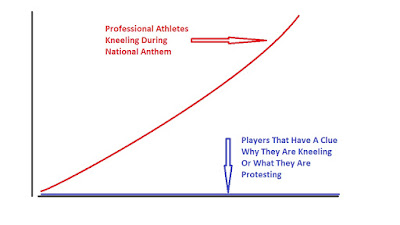 Perhaps an exaggeration but not a huge one. Colin Kapernick, who is an utter idiot and mediocre quarterback by the way, at least has clumsily tried to explain why he was kneeling (hint, it had something to do with cops like the ones depicted as pigs on his socks. Classy!). The rest of these guys I think are just doing it to virtue signal or as a more polite middle finger to Trump, which I can't really blame them for.

A particular scene stood out for me yesterday from the Detroit Lions game against the Atlanta Falcons. Rico Lavelle, who I have never heard of,  the guy who sang the national anthem which is a great honor for any singer, took the opportunity to kneel at the end and toss up the black power fist salute.


WOW. Rico Lavelle, who sang the national anthem ahead of Detroit & Atlanta, kneels after the anthem. pic.twitter.com/z0qPfem8kh
— Harry (@HarryCFC_) September 24, 2017

Let me be clear. The black power fist symbolizes a lot of things to me and none of them are very positive. It brings to mind things like the Black Panthers, black nationalism, the violence of the radical movements of civil rights era. To me and many White Americans, right or wrong, the black power salute is a tacit threat. In a way it is a gesture symbolic of racial animus like a skinhead giving the Nazi salute. Think that is an exaggeration? The black man who allegedly murdered one and shot multiple other White churchgoers in Antioch, Tennessee yesterday, Emanuel Kidega Samson, is a Sudanese immigrant who has on his (not taken down yet but soon to be) Facebook profile this picture that was once his cover photo: 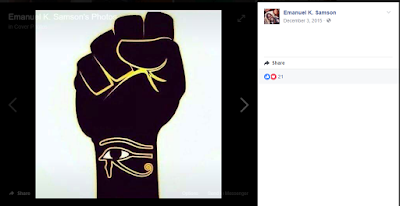 I pulled the above screenshot from his page myself lest you think this is some conspiracy theory or photoshopping. I don't think everyone throwing up a black power salute is a potential mass shooter but I also don't think that anyone who is a White nationalist is one step away from tossing Jews in an oven. So don't tell me there isn't a more sinister meaning behind the black power salute, even if most people don't realize it.

What I found even worse is that there are four little black boys in the picture, all looking at Mr. Lavelle, while he kneels and throws up the black power salute. The little boy on the right especially is looking at that raised fist. I wonder what they were thinking? Here is the harsh reality of life for young black boys that live in Detroit....

Detroit has long been one of the most murder prone cities in the country. The raw number of murders might not be as high as Chicago but that is thanks only to the plummeting population of Detroit. The per capita rate of murder in Detroit is often at the top and this year is in second place thanks to the ongoing slaughter in St. Louis, ironically home to the most recent racial unrest. Check out this chart: What do the top five cities on this list, with widely outsized murder rates, have in common? In 2010 Detroit's population was 82.7% black. St. Louis was 49.2% black, the largest racial group. New Orleans was over 60% black. Baltimore is around 63% black. Newark is over 52% black.

You want to know who is getting murdered in Detroit?

You want to know who is murdering them?

This is the truth that everyone knows but no one wants to say speak out loud. Let me be even more uncharacteristically blunt. When those four black boys in that photo grow up, there are statistically at far greater risk of harm from each other than they are from any White person or any cop for that matter. Cops killing black men without cause is an issue but compared to black men killing other black men it is way down on the list.

While people like Ta-neshi Coates get wealthy selling books and essays about the "White supremacist" bogeyman, and the number of actual White supremacists as distinguished from the more common White nationalists is tiny, the real threat to the lives of black men is primarily and almost exclusively from other black men.

I hope someone sits down with those four young boys and explains to them that killing each other over drug turf and personal insults is a certain way to end up in jail, dead or eventually both and that perpetuating this cycle of violence is destroying any future for blacks in America. It is easier, more politically expedient and more personally enriching to blame all of your community's problems on the "other" of "White supremacy" but the overriding problem in the black community is a lack of personal responsibility. You are free to dismiss that assertion but I stand by it nonetheless. Playing the perpetual victim card has led us to where we are today and the black community desperately needs voices to stand up and say "Stop blaming other people for your problems and for crying out loud stop shooting each other!". Saying stuff like that won't get you published in the elite newspapers and magazines and probably won't get you book deals but if enough black men start to speak up and say to each other that enough is enough it might be what their community needs to pull back from the abyss.
Posted by Arthur Sido at 10:40 AM