Would it be rude to point out that the High Priests of the contemporary cult of Molech make millions in revenue and are subsidized for millions more by the government and what they do with babies is actually undermining their humanity? You know, by ripping them literally limb from limb, sucking them out of the womb of their mother and then either dumping them in the trash or selling them for parts? Or perhaps pointing out that having Planned Parenthood in existence actually puts lives at risk, a proven risk demonstrated in the statistics of abortions performed by Planned Parenthood.

What is truly sad is that they have no idea why this tweet is so ironic and ridiculous. It is like a fat kid making fun of someone else for Super-sizing their McDonald's order. They are dead in sin, worshiping a false demonic "god" and think they are being noble about it. It would be hard to find a more tone-deaf and ironic tweet than this one.

While the civil laws of Israel do not apply, make no mistake. Those who sacrifice children for any reason, even when sacrificing those children on the altar of the blood goddess "Choice", stand condemned by God and only the shed blood of Jesus can redeem them from the judgment of God. On that day of Judgment they will desperately wish that all that they faced were stones in the hands of the Israelites. 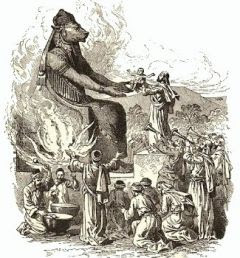