Mental Illness Deserves Mental Health Care, Not A Uniform And A Gun

In an all too rare sign of common sense, President Trump today announced that people who suffer from gender dysphoria will be barred from serving, in any capacity, in the United States military.


After consultation with my Generals and military experts, please be advised that the United States Government will not accept or allow......
— Donald J. Trump (@realDonaldTrump) July 26, 2017

....Transgender individuals to serve in any capacity in the U.S. Military. Our military must be focused on decisive and overwhelming.....
— Donald J. Trump (@realDonaldTrump) July 26, 2017

....victory and cannot be burdened with the tremendous medical costs and disruption that transgender in the military would entail. Thank you
— Donald J. Trump (@realDonaldTrump) July 26, 2017


That is a little something I like to call common sense and simply reaffirms the policy of the U.S. military for hundreds of years until the Obama administration. I guess that also settles the question of paying for gender reassigment surgery, aka bodily mutilation, in the military. Being "transgender" is a medical condition called gender dysphoria (not to be confused with gender non-conformity) and the American Psychiatric Association considers it a medical condition. Lots of medical conditions keep you out of the military like asthma and apparently even ADHD. If that is the case then someone who is confused about their biological, immutable gender should also not be in the military.

Whatever your views on military service are, it is or at least should be unquestioned that the military exists for one purpose, to defend this nation. It is not a jobs program or a way to get college paid for by someone else and it certainly is not a giant laboratory for social experiments. People who are unstable enough that they think they are the opposite gender shouldn't be placed in the role of defending this country. They should be getting help to cope with their actual gender, not be allowed to dress up like the opposite gender in the uniform of the United States military.

Needless to say, this is causing an absolute firestorm on social media. That is pretty funny because 10 years ago having cross-dressers in the military was only something you thought about when watching M*A*S*H.


I created a meme this morning to respond to the angry people on social media, it is getting a lot of use already. Thanks President Trump for making a common sense, mental health sensitive decision that will benefit this country. He doesn't get everything right but he got this one correct. 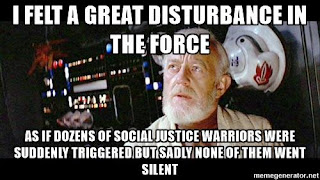