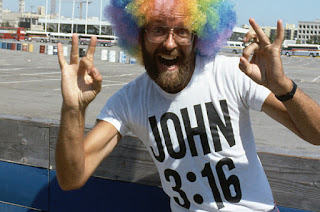 That title can't be right. The 3rd chapter of John's Gospel account is all about the love baby! John 3:16 yo and all that. If you can't get your theology from a guy wearing a rainbow wig and carrying a sign, where can you get it?


The reason I bring this up has to do with the general method a lot of people use for interpreting the Bible, namely picking out a verse and ignoring the verses before and after it. This leads to all sorts of screwy theology.

John 3:16 is a prime example since it is perhaps the best known verse in the Bible. If all you read of John chapter 3 is that particular verse you might end up with a "God is love and nothing else" theology but that misses the broader statement Jesus is making. I know the chapter and verse markers are made up after the fact but just looking at that one verse gives us a false understanding of what Jesus is saying and boy oh boy do we have a lot of that going on with  the "Give me Jesus, not some dusty old Bible" malarkey going around (more on that later). I would argue, and am about to, that the third chapter of John speaks a lot more about wrath and judgement than it does about a sappy notion of unconditional love, defined as letting people do whatever they want and forgiving them anyway.

Let's look at some of the passages in question (as usual all from the ESV):

Jesus answered him, "Truly, truly, I say to you, unless one is born again he cannot see the kingdom of God." (John 3:3)

Jesus goes on with this theme:

Jesus answered, "Truly, truly, I say to you, unless one is born of water and the Spirit, he cannot enter the kingdom of God. (John 3:5)

Again the stark difference. Not born-again, no Kingdom. Not that it is more difficult, like a rich man trying to enter the Kingdom (Matthew 19:24). Cannot. I don't know the Greek but I am guessing that it is pretty clear that cannot mean impossible.

And as Moses lifted up the serpent in the wilderness, so must the Son of Man be lifted up, that whoever believes in him may have eternal life. (John 3:14-15)

In the verses immediately preceding John 3:16 we see Jesus qualifying eternal life and restricting to believers. You believe, you have eternal life. You don't believe? Well then you don't get eternal life. Jesus pretty much lacked nuance and subtlety, His words are often the most black and white, "you are either in or you are out" in all of the New Testament. Even John 3:16 has wrath as a theme (emphasis mine):

"For God so loved the world, that he gave his only Son, that whoever believes in him should not perish but have eternal life. (John 3:16)

The reason God came was to show His love by providing a means for people to not perish. In other words they were all going to perish but Christ, again here drawing very clear lines, died to redeem those who believe in Him. Onward....

For God did not send his Son into the world to condemn the world, but in order that the world might be saved through him. Whoever believes in him is not condemned, but whoever does not believe is condemned already, because he has not believed in the name of the only Son of God. (John 3:17-18)

Verse 17 seems kinda happy, clappy. See, Jesus didn't come to condemn anyone! God is love! Not so fast my friend. Verse 18 tells us that He didn't come to condemn anyone because the unbelieving are condemned already. You don't see that on t-shirts very often. Jesus had as His mission the saving of sinners (1 Timothy 1:15). That means that people are sinners and they need to be saved because, as we see in the words in red in our Bible, apart from that specific redemption for individuals (and not all individuals) those people are condemned and will perish.

The last three verses in red are below and you might see a pattern here:

And this is the judgment: the light has come into the world, and people loved the darkness rather than the light because their works were evil. For everyone who does wicked things hates the light and does not come to the light, lest his works should be exposed. But whoever does what is true comes to the light, so that it may be clearly seen that his works have been carried out in God." (John 3:19-21)

Darkness vs. light. Believer vs. unbeliever. Born-again vs. dead in sin. Jesus came and many hated Him and still do because they love the darkness. Their deeds are evil. They shun the Light of the World because in the light of Christ are evil deeds are exposed and people love their evil deeds. That is the thing, sinners don't want to follow Jesus on their own because they all, we all, love sin.

My point here is not to deny God's love. The same guy that wrote the Gospel of John, i.e. John, also wrote 1 John and twice we see him describe God as love (1 John 4:8; 1 John 4:16). My point is that God is much more than love. He is love and He is wrath. He is just and He is merciful. He is jealous for His name and He is supernaturally patient. If all we look at are single verses out of context we get as skewed a view reading John 3:16 as we do Roman 9:22 by itself.

Trying to describe God by plucking a verse here and a verse there is bad exegesis and leads inexorably to bad theology. God went to some trouble to preserve the New Testament, the least we could do is read the whole thing rather than just the parts we like.
Posted by Arthur Sido at 3:16 PM